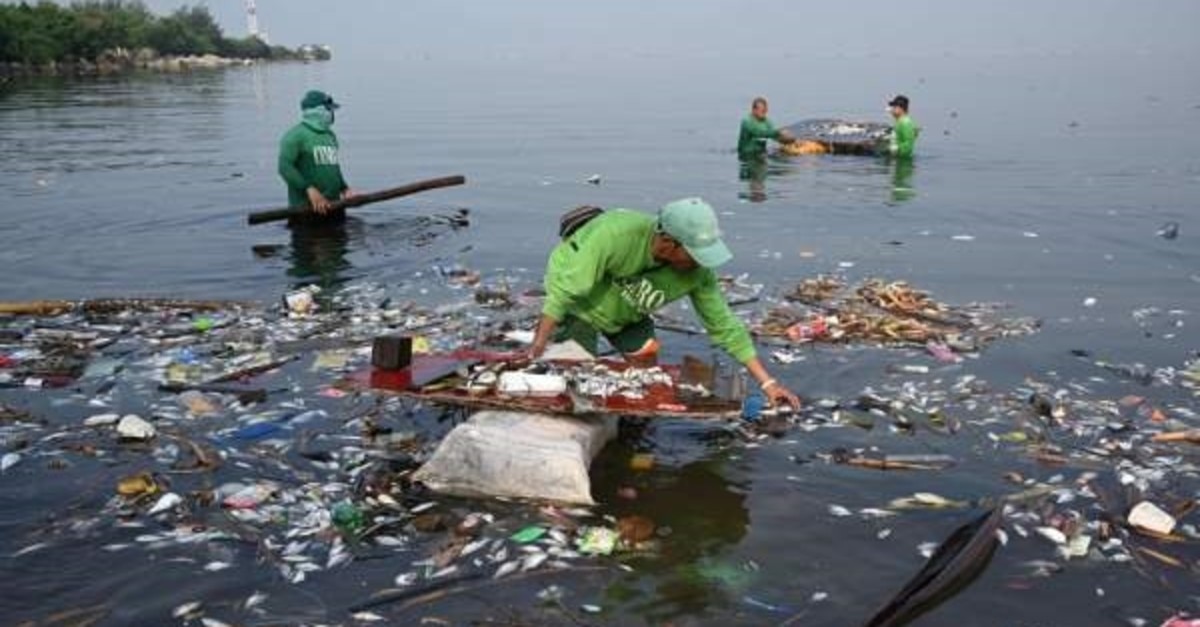 Workers collect thousands of dead fish among rubbish that washed ashore on Freedom Island, a protected area for migratory birds, in Manila Bay, Oct. 11. AFP
by Anadolu Agency Oct 14, 2019 1:14 am
World Migratory Bird Day (WMBD) is being celebrated with almost 700 events – including activities such as bird watching, lectures and cleanup actions – being held in 70 countries on Saturday. WMBD is a biannual awareness-raising event marked on the second Saturday of May and October, is being observed this year under the theme Protect Birds: Be the Solution to Plastic Pollution.
"With an annual production of more than 300 million tons, plastic is one of the most widely used materials in the world," the WMBD's official website wrote in a statement. It added that while single-use plastics can be disposed of after a few minutes, it can take many years for them to decompose in the environment.
The United Nations Department of Global Communications (DGC) also published a video regarding this year's campaign, describing the important role that migratory birds play in the environment as well as their annual migrations. "Many birds of prey that we see in zoos locked in cages or tied down by the leg, would naturally migrate," U.K.-based Freedom For Animals organization said in a statement. They added that they are using this day to stress the cruelty of keeping birds of prey captive. The animal rights group highlighted that keeping birds in captivity is cruel and unnecessary.
"For many of these birds, a zoo is often a very stressful and highly unnatural environment to be placed in. Not only are these birds many miles from home and often in a strange climate, they are denied their basic instincts," it added.
Freedom for Animals began as the Captive Animals' Protection Society in 1957 and is one of the U.K.'s longest-running charities working to protect animals. As part of the day, the World Wildlife Foundation (WWF) mentioned the danger of plastic pollution to migratory birds, saying 90% of seabirds already have plastic in their guts, killing 1 million birds every year.
The WWF said that 12 species are in focus this year: Belted kingfisher, Black skimmer, Chilean flamingo, Common tern, Killdeer, Lesser scaup, Magellanic penguin, Magnificent frigatebird, Northern fulmar, Osprey, Prothonotary warbler and the Tricolored heron.
Referring to the crucial role that migratory birds play in the environment by traveling long distances, it said: "These birds don't just control the numbers of pests and insects that would otherwise plague our natural environments and our crops – many serve as pollinators, moving seeds and nutrients across the world." The seeds of over 90% of all trees are moved around by birds, said the WWF.
The WWF was established in 1961 as an international fundraising organization, to work in collaboration with existing conservation groups and bring substantial financial support to the conservation movement internationally.
Last Update: Dec 20, 2019 1:03 am
RELATED TOPICS