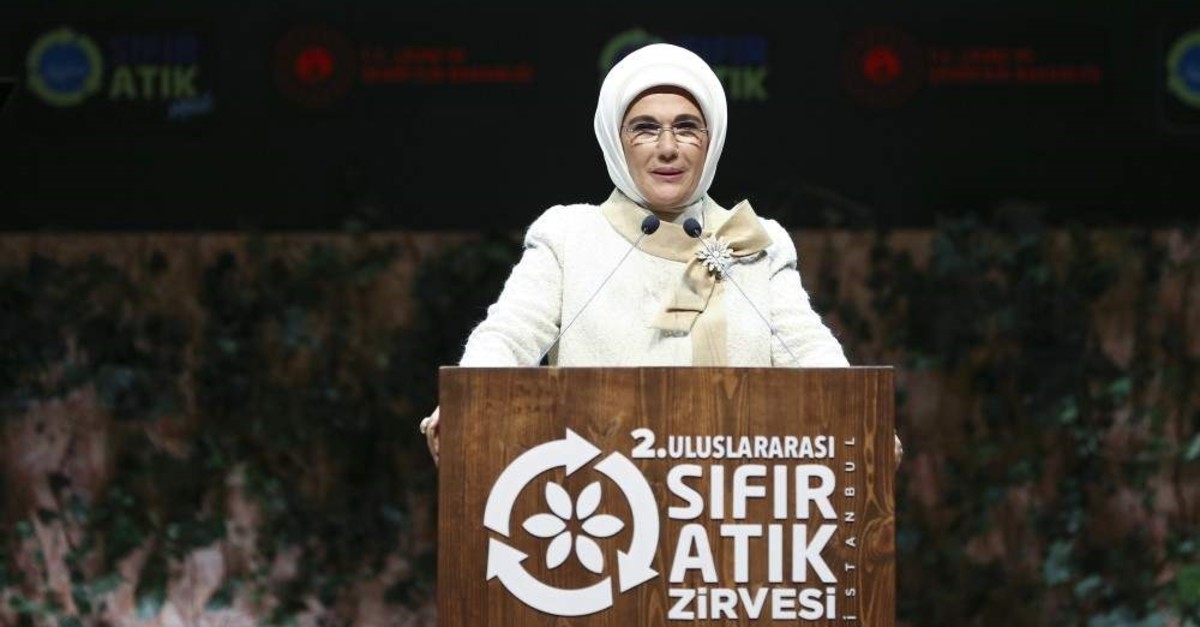 The 2nd International Zero Waste Summit took place with the participation first lady Emine Erdoğan, Environment and Urbanization Minister Murat Kurum and authorities from organizations such as the U.N., the European Union, the Organisation for Economic Co-operation and Development (OECD) and the World Bank at Haliç Congress Center on Friday, Nov. 1.
Taking the stage as the champion of the Zero Waste Movement, Turkey’s biggest environmental project, Erdoğan said: “Organizing this summit for the second time is proof of our determination and dedication on the subject. The environmental crisis is not a simple problem, but something that concerns humankind.”
Erdoğan said drought and famine are not our fate but something that we can change with effort. “We need to see the whole picture. There are duties that fall upon individuals as well as the industry,” added Erdoğan.
Drawing attention to the single-use habit, Erdoğan continued: “We urgently need to realize that the lifestyle that is promoted with the motto ‘use once then throw away’ is wrong. We need to deny the reflex of throwing away clothing and instead wear it for years. The textile industry is the second biggest polluter in the world. Clothes that are not made from decomposable material can stay around for 200 years.”
Erdoğan also asked everyone to calculate their impact on the environment and act accordingly. She said the Zero Waste Movement will increase environmental awareness in Turkey.
Speaking at the summit, Minister Kurum said Turkey is one the countries that will be affected by climate change the most. “Due to the technological advances, the increase in the world's population and urbanization in the last 200 years, humanity is facing environmental pollution. The pollution led to global climate change. Sea levels have risen 19 centimeters so far. If climate change is not stopped, one-third of the world’s population will be affected. Turkey’s cities are in danger. Being in the Mediterranean basin, Turkey will be one of the countries that will be affected the most,” Kurum said.
Kurum shed further light on Turkey’s efforts to increase natural protection areas and ecologic corridors, which will help Turkey’s fight against climate change. “Turkey has 2,469 natural protection areas, and we are building ecological corridors in 22 provinces across Anatolia,” said Kurum and continued: “We have also initiated projects to save energy. Our buildings are responsible for half of the energy used in the country. We are encouraging official buildings as well as households to use energy only as needed. So far, we have saved millions of Turkish liras worth of energy. We have also saved millions of trees with this project.”
With the zero waste project initiated in 2017, Turkey started to impose fees on the plastic bags used in shops and markets, encouraging people to use cloth and string bags. “In the first nine months of the program, the use of plastic bags decreased from 3 billion to 732 million,” added Kurum.
The minister also heralded that a deposit system will be introduced in 2021 that will encourage people to recycle plastic bottles and such. “We will install machines in our cities to turn the deposited plastic bottles into bus tickets or maybe toys for children,” Kurum said, adding we need to limit the demand for single-use plastics as much as possible.
What is zero waste?
Zero waste is a waste management philosophy aimed at using resources more efficiently, uncovering the reasons for waste formation, preventing waste formation and collecting and recovering waste at sources already separated.
The project, which started in 2017 and was embraced nationwide in two years, was first applied at the Beştepe Presidential Complex and ministries, later spreading to municipalities countrywide and taking hold in private companies and public buildings, from hospitals to schools. Currently, over 18,750 public institutions are included in the project, separating waste at its source.
Organized for the second time by the Environment and Urbanization Ministry, the Zero Waste Summit included panel sessions on "Urban Solutions for Global Problems," "Zero Waste in Cities," "Waste Management and Finance in Local Governments" and "Sustainable Waste Management and Resource Efficiency in a Circular Economy." The summit also presented awards for environmental awareness and successes.