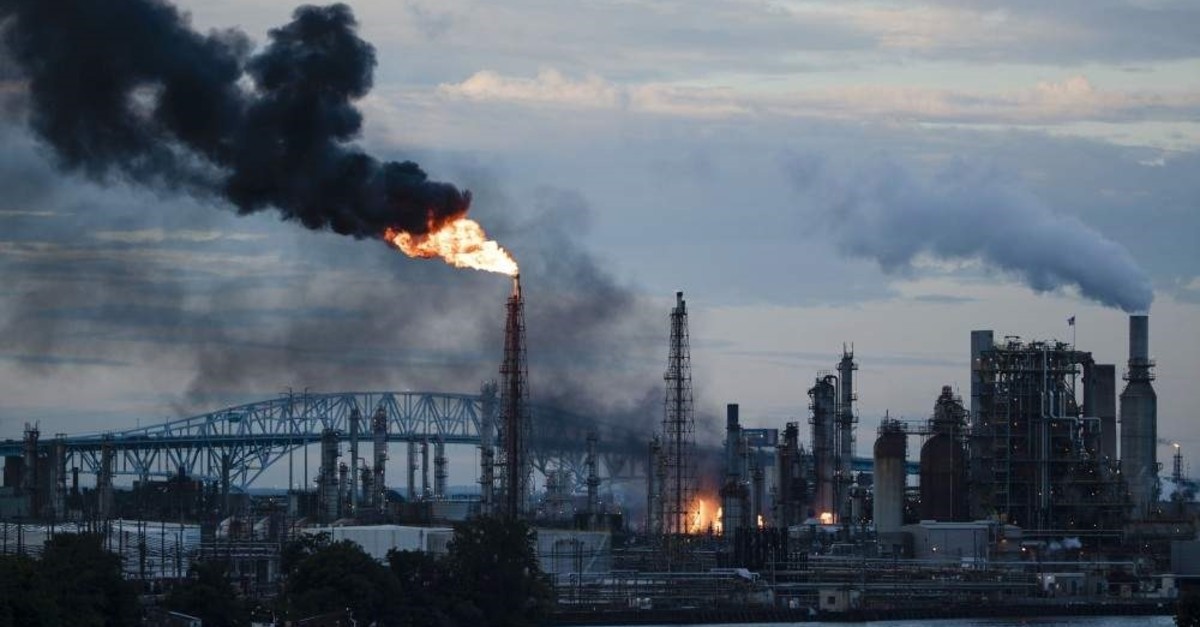 In this June 21, 2019 file photo, flames and smoke emerge from the Philadelphia Energy Solutions Refining Complex in Philadelphia. (AP Photo)
by Compiled from Wire Services Nov 20, 2019 9:25 am
The world's major fossil fuel producers are set to bust global environmental goals with excessive coal, oil and gas extraction in the next decade, the United Nations and research groups said Wednesday in the latest warning over climate crisis.
The 10 nations in focus, including superpowers China and the United States, plan to produce fuels by 2030 at levels between 50-120% over Paris Agreement targets, the study showed.
Under that 2015 global pact, nations committed to a long-term goal of limiting the average temperature increase to within 1.5-2 degrees Celsius above pre-industrial levels.
However, by 2030, the 10 countries' planned production would lead to 39 gigatons (Gt) of carbon dioxide emissions, 53% higher than what is needed to reduce temperature rises to 2C and 21 Gt, or 120%, more than is needed for 1.5C, the report said.
Other countries analyzed included Russia, India, Australia, Indonesia, Canada, Germany, Norway and Britain.
"The world’s energy supply remains dominated by coal, oil and gas, driving emission levels that are inconsistent with climate goals," said United Nations Environment Program (UNEP) executive director Inger Andersen.
As well as UNEP, the report was produced by the Stockholm Environment Institute, the International Institute for Sustainable Development, the Overseas Development Institute, and the CICERO Centre for International Climate and Environmental Research and Climate Analytics.
It created a new metric called "the fossil fuel production gap" highlighting the difference between rising production and the decline needed to restrict global warming.
The gap was largest for coal, with countries planning to produce 150% more in 2030 than would be consistent with limiting warming to 2C, and 280% more than would limit warming to 1.5C.
"The continued expansion of fossil fuel production — and the widening of the global production gap — is underpinned by a combination of ambitious national plans, government subsidies to producers, and other forms of public finance," the report said.
The report precedes UNEP's annual "emissions gap" report, due next week, which assesses whether countries’ emissions cut policies are enough.
Meanwhile, a separate analysis by the Economist Intelligence Unit showed that climate change could directly cost the world economy $7.9 trillion by mid-century as increased drought, flooding and crop failures hamper growth and threaten infrastructure.
Climate Change Resilience Index measured the preparedness of the world's 82 largest economies and found that based on current trends the fallout of warming temperatures would shave off 3% of global GDP by 2050.
Its analysis, which assesses each country's direct exposure to loss as climate change brings more frequent extreme weather events, found Africa was most at-risk, with 4.7% of its GDP in the balance.
In general, developing nations faired poorer in terms of resiliency than richer ones.
"Being rich matters," John Ferguson, EIU country analysis director, told French Press Agency (AFP).
"Richer nations are really able to be more resilient towards the impacts of climate change, so this really threatens growth trajectories of the developing world as they try to catch up with the developed world."
"When we are already dealing with global inequality, for the impacts of climate change the developing world's challenges are much greater," he added.
Of the countries evaluated, Angola stood to lose the most — as much as 6.1% of gross domestic product.
The study put this down to a mixture of a lack of quality infrastructure, as well as its geographical exposure to severe drought, soil erosion and rising sea levels.
Land degradation in Angola would prove a "significant" economic hindrance, the report said, given that agriculture is its largest employer.
Nigeria (5.9% negative GDP), Egypt (5.5%), Bangladesh (5.4%) and Venezuela (5.1%) were the next most climate vulnerable nations identified in the analysis.
Last Update: Dec 20, 2019 1:48 am
RELATED TOPICS