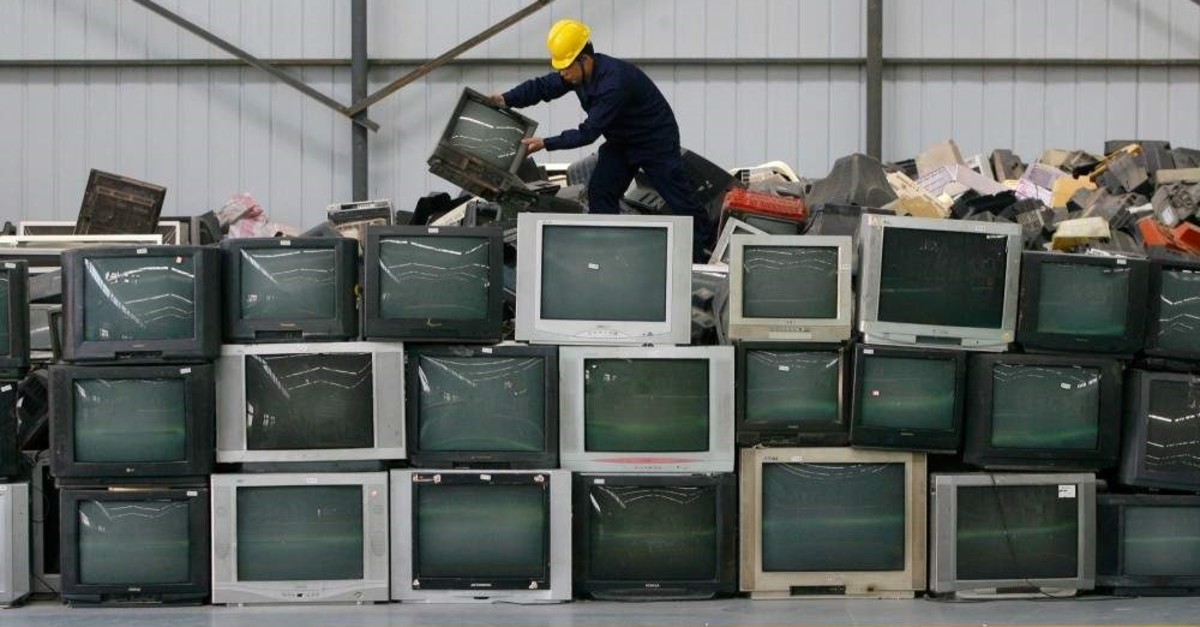 An employee arranges discarded televisions at a newly opened electronic waste recycling factory in China. (REUTERS)
by Anadolu Agency Nov 25, 2019 3:17 pm
Whether we are technology addicts or not, rapidly changing and developing electronic goods constitute a new type of waste that is growing globally: electrical and electronic waste, or e-waste.
The world produced 44.7 million tons of e-waste in 2016 and Turkey consumes more than 400,000 tons of it annually, or the equivalent to 13.4 pounds (6.1 kilograms) per person, according to the World Economic Forum (WEF) and European Union.
"The figures tell us a fact: manufacturers aim to produce new and refurbished electronic products that can catch the attention of customers, but this is not consistent with the idea of sustainability and sustainable consumption, also it leads to increase in e-waste," said İlkim Yiğit, an environmental engineer and head of the Association of Electrical and Electronic Waste Recycling and Management (ELDAY). "If we keep this mentality, we will realize that our natural resources are not infinite," Yiğit stressed.
She said electronic devices not only need ores and natural sources to be produced, but they need energy to be recharged. "There is not yet a different kind of energy to charge our mobile phones. Turkey spends 24% of its electric energy on housing," she added.
A carbon footprint, or the amount of greenhouse gases, primarily carbon dioxide, released into the atmosphere by human activity, can be mainly reduced by recycling.
"Using recycled materials instead of ore and fossil fuels to produce goods will play a major role in the protection of earth resources," Yiğit said, adding that 4.5 pounds of e-waste recycling produce a pound of iron. This amount raises to about 450 pounds of ore to obtain the same amount of iron from natural sources.
What is e-waste?
Any electric device, including TVs and monitors, mobile phones and tablets, small appliances, personal care devices and even lighting equipment operated by plugging or charging, which no longer works or is not desired to be used becomes waste.
E-waste, the only type with the most variety and the highest amount of raw materials, is first collected by municipalities or private facilities. It is transferred in specially designed trucks to recycling facilities where it is pre-sorted. Batteries, fluorescent lamps and monitors are separated. Only batteries are transferred to recycling facilities with other e-waste; the rest is transferred to incineration facilities.
Materials such as gold, copper, iron, stainless steel and plastic, produced as a result of the recycling process, are transferred to raw material companies.
Only one-fifth of e-waste that is produced is recycled in Turkey annually.
"In order to reorganize the waste management system and to avoid wasting resources, systematic cooperation between electronic goods manufacturers, big, small and medium-sized enterprises, scientists, trade unions, NGOs and associations should be increased," Yiğit added.
Turkey's Zero Waste Management System regulation, published on June 12 in the Official Gazette, seeks to reduce the volume of non-recyclable waste as well as hold public institutions, organizations, and provincial governorates with populations of more than 250,000 responsible for waste management by 2020.
Last Update: Dec 20, 2019 1:54 am
RELATED TOPICS