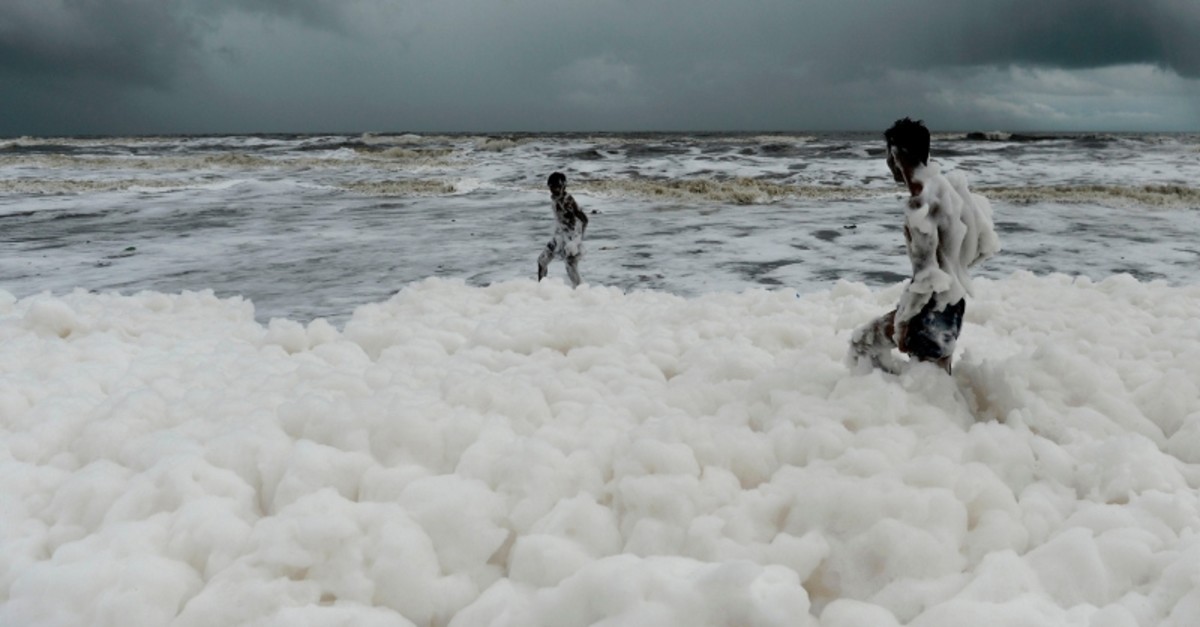 A menacing white foam covered one of India's most famous beaches in Chennai for the fourth straight day Monday creating a new pollution hazard for the country.

Children have been playing and taking selfies in the clouds of white suds on Marina Beach, even though they give off an acrid smell, and fishermen have been told not to go into the sea nearby.

Doctors have warned that skin problems could be caused by the foam, which forms every monsoon season but has been particularly bad this year.

Word has not got through to the hundreds of families who throng India's longest urban beach, letting children happily skip in the toxin-filled froth.

The Tamil Nadu Pollution Control Board said it is analyzing samples from the foam which has spread several kilometers along the beach.

"It is definitely not good for people to go into the foam but they just do not understand the risks," said Pravakar Mishra, a scientist at the National Center for Coastal Research in Chennai, which has seen the clouds of foam grow in recent years.

Authorities were also on alert for a repeat of a 2017 incident when thousands of fish were killed by pollution that hit beaches around the same time.

Fisherman Jeyaseelan, 30, said customers do not want to buy even the small amount of fish he has been able to catch in recent days.

"Everyone thinks it is contaminated," he said. "My wage has been cut to next to nothing."

Marina Beach has been a centerpiece of Chennai life for more than a century. On weekends, tens of thousands fill the once-pristine sands where the pollution is another sign of India's struggle to keep up with its growing economy.

Experts blame heavy rain in recent days that has carried untreated sewage and phosphate down to the sea.

According to Mishra, much of the foam comes from washing detergent residue that mixes with other waste.

Only 40% of sewage in Chennai and other big cities gets proper treatment, the researcher added.

"The rest flows into the sea and this is what happens."

Mishra is setting up a buoy to monitor pollution levels in the sea just as Delhi now has a network of monitoring stations for its notoriously dirty air.

"Pollution is now a bigger threat to India's beaches than the rising seas," said Mishra, highlighting the sewage and, microplastic that is killing fish and the bags and cups that cover the sand.

Mishra said volunteers had collected nearly a ton of plastic and other waste in just two hours at a Chennai beach during a recent cleanup.