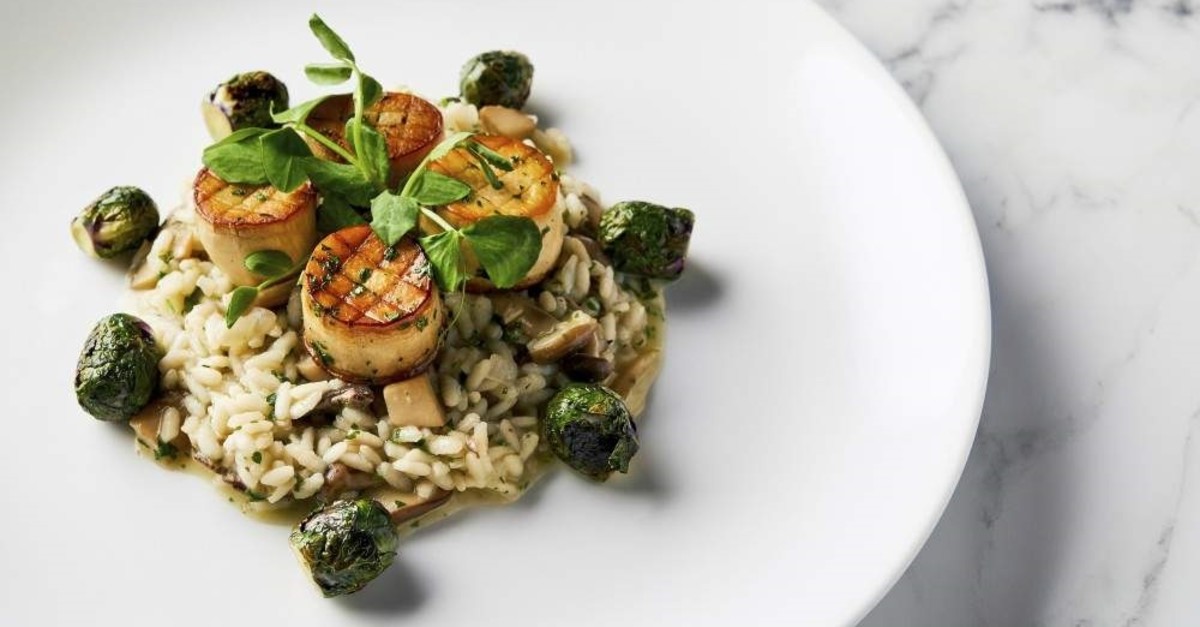 This image released by the Golden Globe Awards shows a dish of king oyster mushroom scallops on a bed of wild mushroom risotto with roasted Brussels sprouts, prepared by Beverly Hilton Executive Chef Matthew Morgan. (Golden Globe Awards via AP)
by Associated Press Jan 03, 2020 10:56 am
The Golden Globes, famed as "party of the year," is set to serve is guests with an entirely plant-based menu in line with this year's 77th annual award ceremony.

Guests will be served a 100% vegan meal just ahead of showtime Sunday. The Hollywood Foreign Press Association said Thursday that it wants the initiative to raise awareness on the environmental impact of food consumption and waste.

"If there's a way we can, not change the world, but save the planet, maybe we can get the Golden Globes to send a signal and draw attention to the issue of climate change," HFPA president Lorenzo Soria said. "The food we eat, the way we grow the food we eat and the way we dispose of that food, is one of the largest contributors to the climate crisis."

The annual awards ceremony will air on NBC from the Beverly Hilton in Beverly Hills, California.

Soria said there was some initial push back about changing the menu just two weeks ahead of the show, but the hotel eventually agreed on the new menu.

"People were basically saying it's too late, we're ready with all the orders, the holidays and all that," he said. "But after we began discussions, meeting for one or two days, [the hotel] accepted the change completely. They started to experiment with how to make plant-based meals that would not just constitute a symbolic step, but would also be something that guests could enjoy."

The Beverly Hilton's Executive Chef Matthew Morgan called the menu change initially surprising. But he ultimately understood it would send a positive message.

"It was a little shocking when it was first mentioned, because of being very close to the actual Globes and having already decided on a menu," he said. "But once we thought about it and the message that it sent, we were really excited about it. That's something I stand behind myself."

Items on the main entree include king oyster mushrooms scallops and wild mushroom risotto, along with carrots and roasted baby purple and green Brussels sprouts. A chilled golden beet soup will be served as an appetizer.

HFPA partnered with Icelandic Glacial, a naturally alkaline and sustainably-sourced natural spring water. The water will be served in glass bottles to eliminate plastic waste at the ballroom and along the red carpet, which is reused at other events throughout the year.

Soria called the food "excellent" after a recent sample. Meanwhile, chef Morgan reported that the change had not been too difficult to arrange, as the first course had already been vegan and that the new main course was a vegan alternate in which they merely enhanced the dish to add some "pop and color to the plate."
RELATED TOPICS