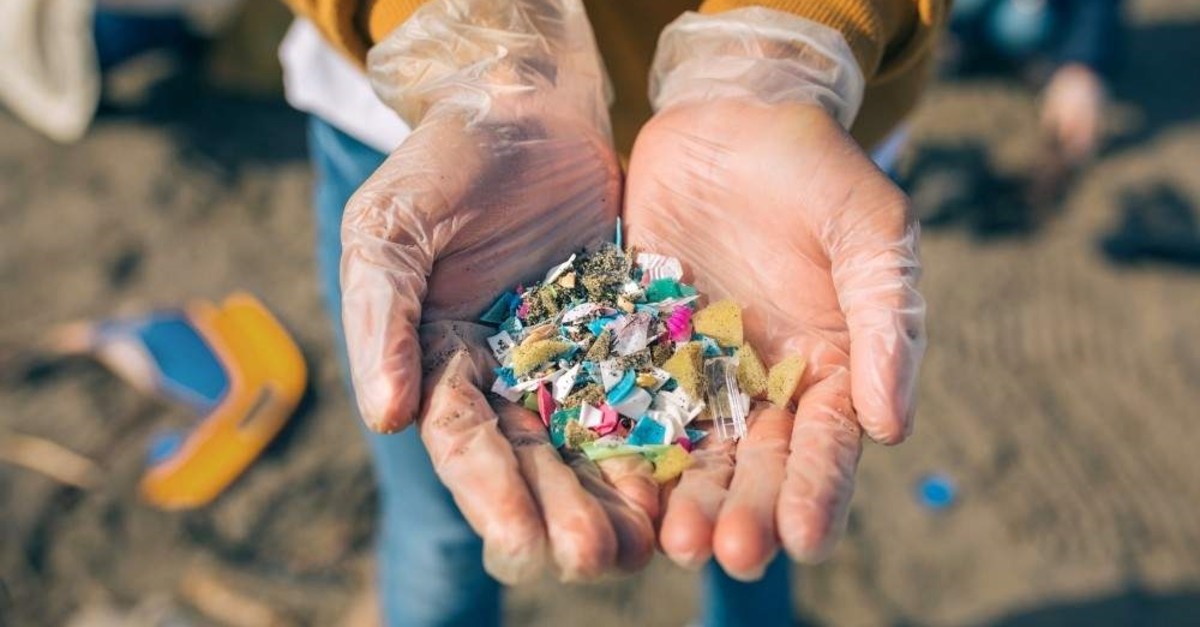 Microplastics have been popping up everywhere from the waters of Antarctica to our table salt. (iStock Photo)
by Anadolu Agency
Jan 12, 2020 7:48 pm

If the current trend continues and 1 billion tons of plastic are produced annually by 2050, the world will be facing a very serious public health and waste problem, according to an expert on plastic waste.

"We could see more plastic in the sea than fish. Lands could be filled with abandoned mountains of plastic garbage," Sedat Gündoğdu, a sea waste and microplastics expert at Turkey's Çukurova University, told Anadolu Agency (AA).

Gündoğdu said plastics can be divided into macroplastics, microplastics and nanoplastics, with the latter in particular extremely difficult to identify, affecting people through the contamination of the food chain.

"Macroplastics are also the main source of microplastics and nanoplastics. While getting tangled in macroplastics could lead to animals being amputated, marine species, for example, can suffocate and die from plastic ingestion. Plastics are a threat to all living creatures, including the smallest species," he added.

Gündoğdu said turtles in particular tend to suffer serious injuries that lead to the amputation of their limbs because they get caught in plastic waste, while others suffocate to death.

"For example, 300 endangered sea turtles were found dead off the coast of Mexico (in 2018) because they were caught in an abandoned (plastic) fishing net. Similarly, many large whale species are dying due to plastics in seas," he said.

Classifying plastics by their chemical structure, Gündoğdu said polystyrene rigid, polyvinyl chloride (PVC), polyethylene and polyethylene terephthalate (PET) were serious threats after becoming waste, which is the main reason many countries want to send plastic waste to other countries.

"Despite the fact that plastic makes human life easier, its dangerous properties are ignored. No other material is used so widely and carries so much risk," he said.

The fact that plastic contains many toxic chemicals and pollutants makes it a "Trojan horse," he added.

Commenting on the relationship between plastics and climate change, Gündoğdu highlighted that from production to recycling, plastic is a terrible culprit in the climate crisis. Since plastic is made from oil, it is one of the main sources of greenhouse gasses.

"The amount of greenhouse gasses emitted from plastic production and burning was estimated at over 850 million tons in 2019, equivalent to the emissions from around 189 coal-fired power plants," he said.

He added that the estimated amount of greenhouse gas emissions from plastics will increase to 2.8 billion tons by 2050.

Reiterating the dangers of plastic to public health, the environment and the climate, Gündoğdu said that this "easy, fast lifestyle" should be given up.

"We need to stop using so much plastic and turn to product designs suitable for re-use. We need to implement a deposit-refund system and ban single-use plastics."

"Plastic is everywhere, and I think the question should now be 'Where isn't there plastic?' We are only just beginning to understand the problems associated with this issue," Rebecca Prince-Ruiz, founder and executive director of the Plastic Free Foundation, told AA.

Ruiz said 8 million tons of plastic enter oceans each year, affecting more than 270 marine species. It is also estimated that 99% of seabirds will have ingested plastic throughout the next 30 years. The U.N. estimates that 8.3 billion tons of plastic have been produced since the early 1950s.

"As a material, plastic has its advantages ... Plastics have enabled us to transport food and other goods from the other side of the world," she said, underscoring that we should nonetheless be striving for a world without plastic waste.

"We need to significantly reduce our use of single-use plastics, and have systems to collect and reuse that material," Ruiz said, reiterating that plastics were inherently linked to the epic rise in consumption of resources and modern consumer culture.