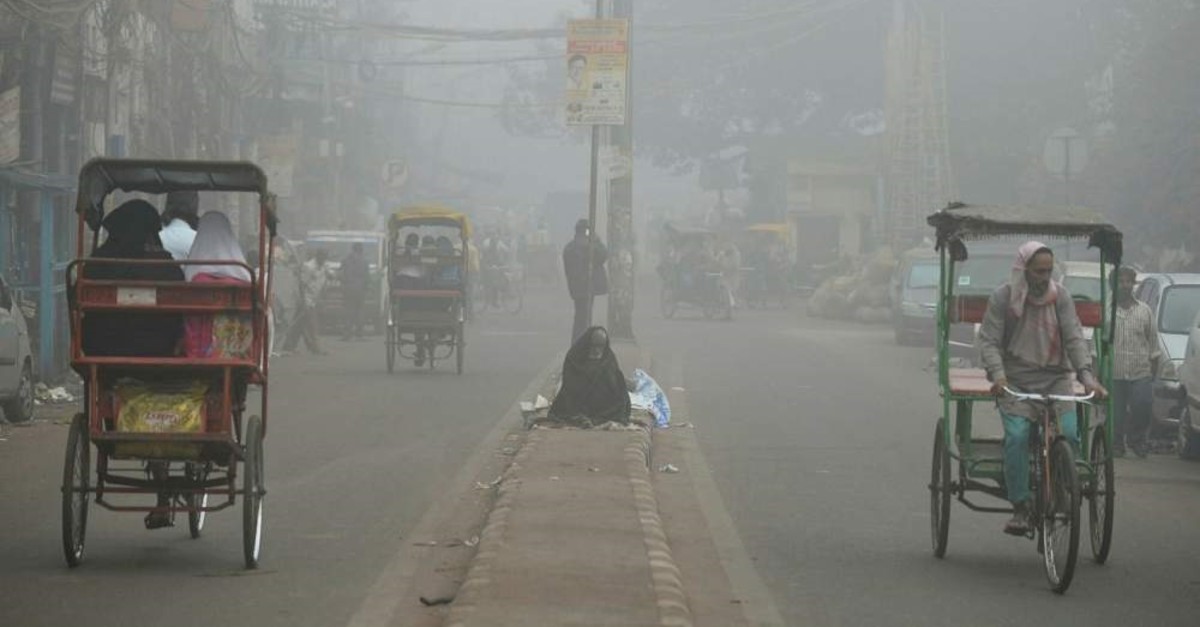 The global cost of air pollution caused by fossil fuels is $8 billion a day, or roughly 3.3% of the world's GDP, an environmental research group said Wednesday.

The findings from the Center for Research on Energy and Clean Air (CREA) and Greenpeace Southeast Asia are the first to assess the global cost of air pollution specifically from burning oil, gas and coal.

"We found that Mainland China, the United States and India bear the highest costs from fossil fuel air pollution worldwide, an estimated $900 billion, $600 billion and $150 billion per year, respectively," the report said. 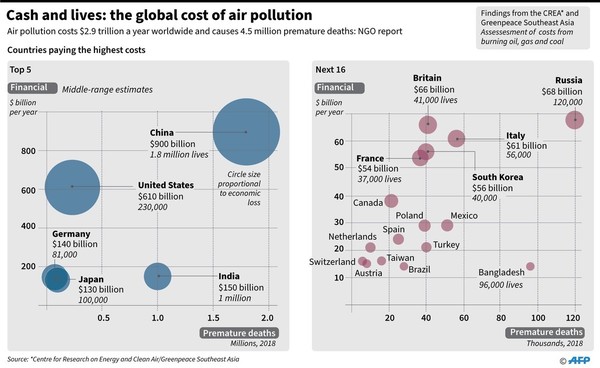 Particles produced by fossil fuel use account for 4.5 million premature deaths each year around the globe, including 1.8 million in China and a million in India, the researchers found.

The new figure is in line with the World Health Organization (WHO) estimates of 4.2 million deaths each year linked to ground-level air pollution, mostly from heart disease, stroke, lung cancer and acute respiratory infections in children.

"Air pollution from fossil fuels is a threat to our health and our economies that takes millions of lives and costs us trillions of dollars," said Minwoo Son, a clean air campaigner at Greenpeace East Asia.

"But this is a problem that we know how to solve: by transitioning to renewable energy sources, phasing out diesel and petrol cars, and building public transport."

The 44-page report breaks down the global burden of fossil fuel-driven air pollution – measured in economic costs and premature deaths – by type of pollutant and country.

Each year the global economy takes $350 billion and $380 billion hits from nitrogen dioxide (NO2) – a byproduct of fossil fuel combustion in vehicles and power plants – and ozone, respectively, according to middle-ground estimates.

Deep into the lungs

By far the most costly pollutant is microscopic fine particulate matter (PM 2.5), which accounts for more than $2 trillion per year in damages, measured in health impacts, missed work days and years lost to premature death.

Some 40,000 children die every year before their fifth birthday due to PM 2.5, which also leads to 2 million preterm births annually and twice as many cases of asthma.

PM 2.5 particles penetrate deep into the lungs and enter the bloodstream, causing cardiovascular respiratory problems. In 2013, the WHO classified it as a cancer-causing agent.

Middle-range estimates of the number of premature deaths stemming from fossil fuel pollution include 398,000 for the European Union, 230,000 for the United States, 96,000 for Bangladesh and 44,000 for Indonesia.

Among countries taking the biggest economic hit each year are China with $900 billion, the United States with $610 billion, India with $150 billion, Germany with $140 billion, Japan with $130 billion, Russia with $68 billion and the U.K. with $66 billion.

Globally, air pollution accounts for 29% of all deaths and disease from lung cancer, 17% from acute lower respiratory infection and 25% from stroke and heart disease, according to the WHO.

The new report used global datasets for surface-level concentrations of the three main pollutants analysed, and then calculated health and cost impacts for 2018.

Estimates of PM 2.5 and NO2 concentrations were based on Earth observation instruments on two NASA satellites that monitor aerosols in the atmosphere.

Deaths, years of life lost and years lived with disability due to PM 2.5 exposure are drawn from the Global Burden of Disease, published in 2018 by the Proceedings of the National Academy of Sciences of the United States of America (PNAS).