313 racist attacks have been carried out against Turks in EU, says foreign ministry 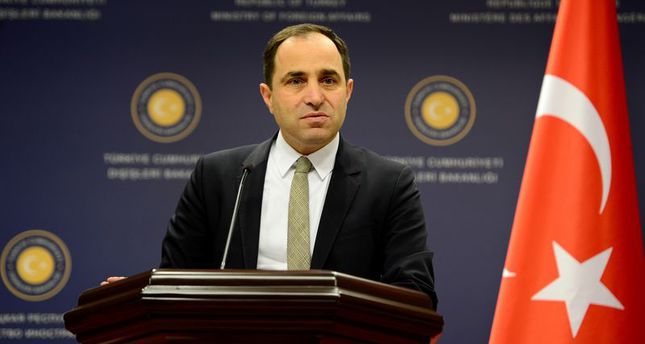 by Daily Sabah Dec 31, 2014 12:00 am
Foreign Ministry spokesman Tanju Bilgiç, in a press conference at the ministry, said that there have been 313 racist attacks committed against Turks in EU countries, including 56 arsons, 106 physical attacks and 46 threatening letters, in the last four years.

Noting that these attacks would negatively affect Turkish citizens' integration into the foreign countries where they reside, Bilgiç said that the main burden is on the shoulders of the politicians and media outlets of those countries in the face of increasing racist attacks.

Touching on the latest arson attacks and vandalism of mosques in the EU, especially in Germany, the foreign minister spokesman said that between August and December 15, attacks have been taking place regularly, including 11 against mosques.

He highlighted the fact that people should fight against racism, xenophobia and Islamophobia in those countries.

Referring to the Patriotic Europeans Against the Islamization of the Occident (PEGIDA) movement in Germany, Bilgiç said that Turkey has urged Western countries to act against racism and Islamophobia.

"I am sorry to say that we have the impression that our warnings [to EU countries] are all in vain. There are many Turks, Muslims and foreigners in Europe. We think that racism, Islamophobia, xenophobia should be reducing, but these demonstrations show that it is on the increase," added the foreign ministry spokesman.