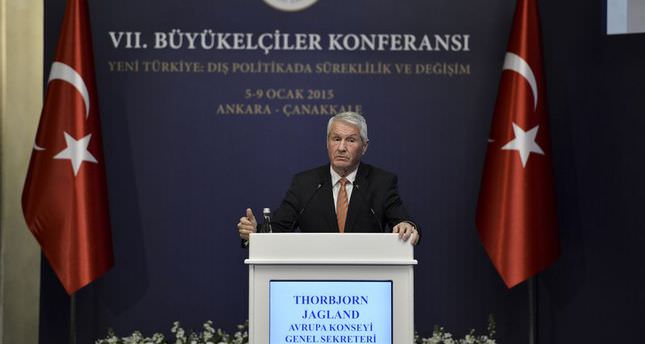 by AA Jan 07, 2015 12:00 am
Turkey desires to be the sixth biggest contributor in the Council of Europe, Turkey's Foreign Minister Mevlüt Çavuşoğlu said on Wednesday.

Çavuşoğlu made the remarks in a welcome address for Thorbjorn Jagland, secretary-general of the Council of Europe, at the Seventh Annual Ambassadors Conference in Ankara, the Turkish capital.

"At a time when Europe needs dialogue, mutual understanding and respect for diversity, the Council of Europe should take a step forward," Çavuşoğlu said.

"We are one of the founding members of this organization, now we would like to be one of the grand payers of the Council of Europe," he said.

The foreign minister said Turkey annually paid €13 million to the Council of Europe.

"We would like to increase this number to €33 million," he said. "Council of Europe has five grand payers, we would like to be the sixth one," he added.

Currently, the U.K., France, Germany, Italy and Russia are the top five contributors in the Council of Europe. Turkey is currently at the seventh spot after Spain.

Turkey also has an active financial contribution in the UN budget between 2013-2015 period. With $63 million, Turkey holds the 16th spot in the most paying countries list in the UN budget.

"Turkey should take its rightful place in the European Union," Jagland said. "Europe needs Turkey because Turkey is bordering one of the hot spots for Europe."

The secretary-general also said that Turkey was bordering Syria, Iraq and Iran, and for Europe it was very important to solve problems in that region.

He also praised Turkey for hosting around 1.6 million refugees.

Jagland described the ongoing crisis in Syria since 2011 as the "biggest scandal in the world after the Second World War."

"We are in the 21st Century, a civil war like this has been going on for four years; 200,000 people have been killed and 1.5 million refugees are in Turkey, millions of others in Jordan and Lebanon. How can it be?" he asked.

Jagland said that the "international machinery," including the UN Security Council should be questioned whether it was functioning or not.

The secretary-general also questioned the wisdom behind not allowing Turkey into the EU.

"Who can say no to add 70-80 million new customers to the internal market?" he said.