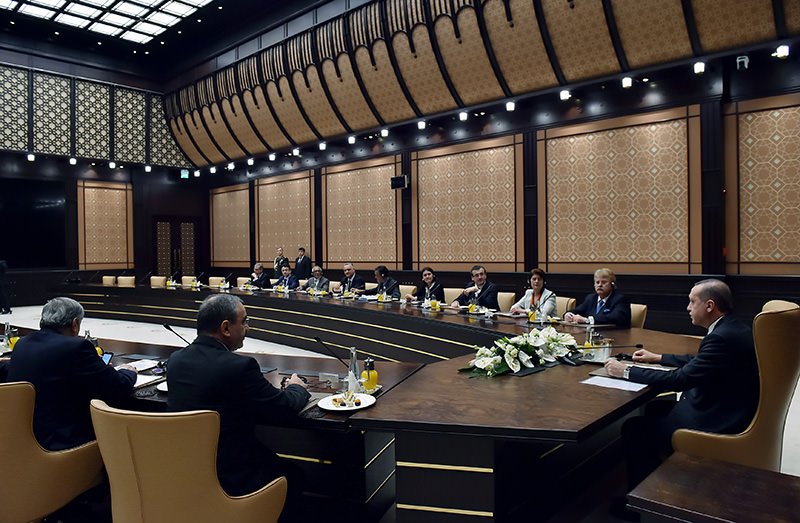 | Photo: u00c4u00b0HA
by Daily Sabah Mar 19, 2015 12:00 am
The current chairman of the European Parliament Committee on Foreign Affairs, Elmar Brok, has held talks with President Recep Tayyip Erdoğan and Prime Minister Ahmet Davutoğlu, during which he said they exchanged views on global and environmental problems as well as national security matters. Brok said they were currently waiting for the progress report about whether or not to open the 17th chapter concerning the economy and monetary policies.

"I think the decision [whether to open chapter 17] will be made in May. I also think we will find a solution on the energy matter as the result of our talks" Brok said.

Brok further added that the trio also discussed the leader of the PKK, Abdullah Öcalan's call for disarmament, which was a historic step in the reconciliation process that was launched by the ruling party in a bid to end the decades-long Kurdish question. Brok said they considered the move a very positive development in the name of peace.

"We are pleased with every peace effort in this country and we support it. I hope this process can be continued." Brok said, adding that these efforts will be added to the progress report.

The European Parliament (EP) has recently drafted a motion for a resolution on the 2014 Progress Report on Turkey. The EP's 2014 Progress Report emphasized the importance of EU engagement to strengthen its partnership with Turkey. Kati Piri, the EP's leading negotiator on Turkey in the Committee for Foreign Affairs, said: "Without a doubt, Turkey and the EU are strategic partners. Therefore, in my report, I call on the EU to use all available tools in the negotiation process in order to engage and to give Turkey the possibility of showing that it is truly committed to democratic reforms."

Co-chair of the Turkey-EU Joint Parliamentary Committee, Afif Demirkıran, said: "The draft report has been fair, unbiased, constructive and in some degree, has met Turkey's expectations. We should note that this report has been drafted in a manner that aims to contribute to Turkey-EU relations."