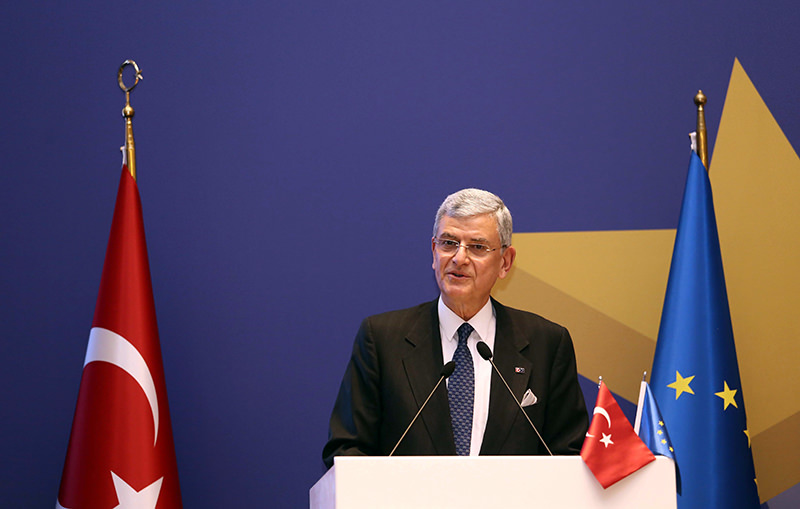 | AA Photo
by Nurbanu Kızıl Apr 16, 2015 12:00 am
Turkey's EU Minister Volkan Bozkır said he watches the Turkish opposition with concern as they remain silent amidst the "genocide" debate which sparked with Pope's statements and reached a new level following the European Parliament's (EP) adoption of a resolution urging all member states to recognize the 1915 events as 'genocide.' Bozkır also said the US will not adopt EP's stance regarding this issue and act smart, while criticized the European Parliament for its controversial decision and referred to it as a "circus."

Through a Twitter message he posted on Thursday, Bozkır called on the opposition to come out and raise their voice instead of "hiding."

"This country belongs to all of us. If there is an attack, we must all take joint action" Bozkır said and addressing the opposition, he added: "Do not hide, just come out."

On Wednesday, Bozkır highlighted that 1915 was a common pain shared by the Turks and Armenians as both nations suffered great losses.
He called the EP resolution on 1915 incidents "slander" and denounced it saying it contradicts historical and legal facts.

The Turkish minister noted that he thinks U.S. President Barack Obama will not adopt the a similar stance to that of the EP when he delivers his annual speech on April, 24, the centenary of the 1915 events.

"The U.S. have always acted smart. I don't believe the President of the United States will fall into that trap," he said.

Referring to the EP as a circus, Bozkır said it has become a place where individuals from numerous countries can table a motion and blamed it for lacking a sense of party discipline.

Bozkır highlighted that the resolution was not binding and outlined the steps awaiting Turkey. "A letter from the EP with details of the resolution would be handed to the Selim Yener, the Turkish Ambassador to the EU and he will return it without even opening it or taking a look at it" Bozkır said.

"The role of parliaments, and in particular that of the European Parliament, which represents millions of Europeans, is not to write history but to provide realistic and lasting solutions to the challenges that we face today in Europe." Bozkır said, while he accused the European legislative institution for their selective stance by disregarding the Turkish atrocities.

Bozkır underscored that the incidents which took place during World War I are shared by Turkey and stated that it is not acceptable to exploit the issue for triggering hostilities against Turkey or to turn it into a political issue.

The Turkish minister said once again that Turkey calls for the establishment of a joint historical commission to study the 1915 events in an objective manner.

On Sunday, Pope Francis drew ire by saying "the first genocide of the 20th century struck Armenians." His statements triggered criticism from Turkey and led to Ankara recalling its ambassador in the Vatican and also summoning Vatican's envoy in the Turkish capital.

Armenia has demanded an official apology and compensation, while Turkey has officially refuted Armenian allegations over the incidents saying that, although Armenians died during the relocations, many Turks also lost their lives in attacks carried out by Armenian gangs in Anatolia and has consistently called on Armenia to open their archives.