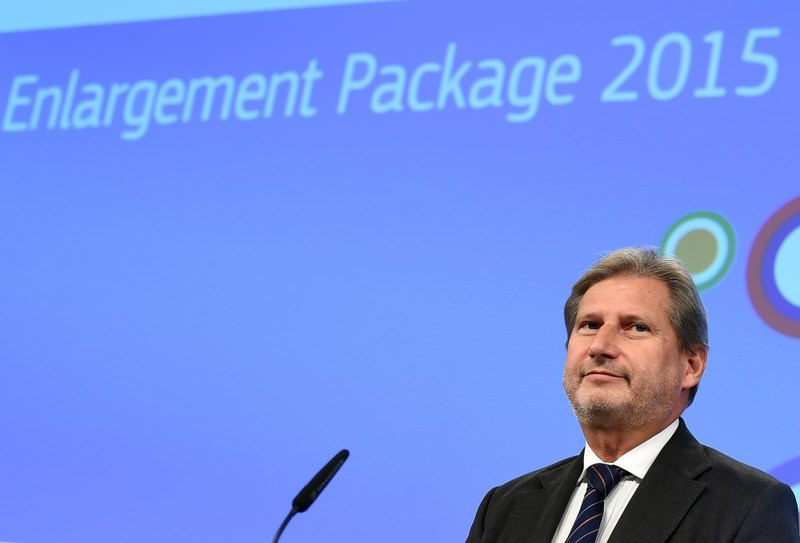 by Merve Aydoğan Nov 11, 2015 12:00 am
The European Commission's (EC) annual progress report for 2015 on Turkey's EU membership bid was introduced on Tuesday at a press conference held by European Commissioner for European Neighborhood Policy and Enlargement Negotiations Johannes Hahn in Brussels. The report praised Turkey's humanitarian aid and support to about 2.2 million refugees from Syria and Iraq and described it as unprecedented. The increasing refugee crisis caused especially due to the Bashar Assad regime's ongoing assaults on civilians has begun to spread to European countries. The EU and Turkey have agreed in principle to a plan of action to help ease the flow of refugees into the bloc. It said that "developing closer economic ties has been a shared priority and both sides agreed to initiate procedures in view of a modernization and extension of the customs union."

Turkey was also praised for the election turnout, which the EC described as "a clear sign of the strength of Turkish democracy with all major political parties being represented in the new Parliament." The report said regardless of serious concerns due to the situation notably in the east and southeast of the country, security for the Nov. 1 early elections was ensured. Concerning Turkey's challenge with refugees, the report emphasized the amount that Turkey has spent on them and added that the country has already spent more than 6.7 billion euros. Regarding Turkey's meeting the benchmarks of the visa liberalization road map, the report said the country has introduced reforms toward achieving the goal.

"We share common opportunities and challenges as made painfully clear by the refugee crisis," Hahn said at the European Parliament in Brussels during the report's release on Tuesday. "I commend Turkey's humanitarian support to more than 2 million refugees; we have stepped up our cooperation for a joint action plan for refugees," Hahn said. "But our relation with Turkey extends beyond migration and we have to continue to enhance our cooperation in all areas of interest," he added.

Although the report praised Turkey's efforts for refugees, democracy and elections, the EC in report expressed concerns for media freedom, rule of law and human rights. The report also added that there has been no progress in freedom of expression and that the judiciary is concerning. The EU report criticized the 10 percent election threshold and said it must immediately be addressed as a priority.

Responding to the EU report, Turkey's EU Ministry said it welcomes the EC's consideration of Turkey's suggestions and that it prepared a more comprehensive report compared to previous years. The EU Ministry in its official statement on Tuesday further indicated: "Though legitimate and reasonable criticism will be taken into account, those findings with which we do not agree and believe are unreasonable will be brought to the attention of the commission." The response from the ministry also said the report does not reflect Turkey's efforts in making reforms efficiently and that Turkey's efforts for a freedom-security balance are being undermined.
RELATED TOPICS