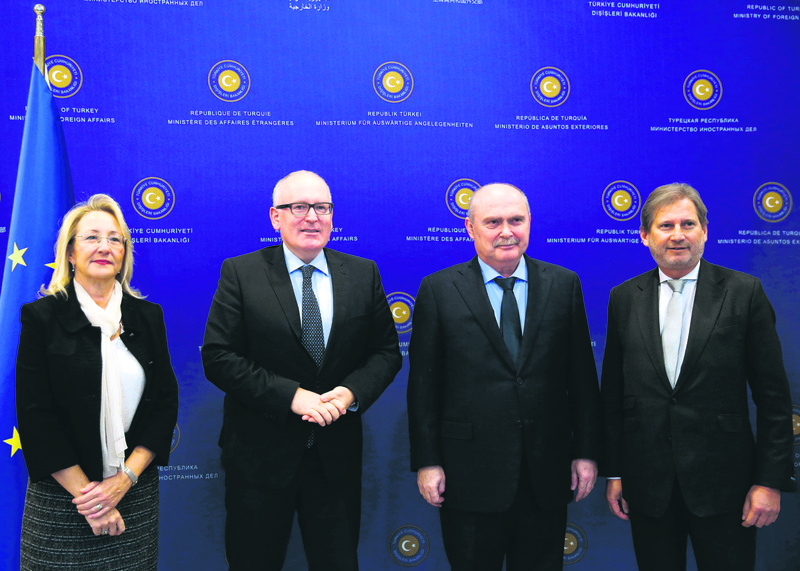 An EU official in charge of enlargement said two days after President Recep Tayyip Erdoğan held a meeting with European Council President Donald Tusk and European Commission President Jean-Claude Juncker in Antalya that EU leaders will try to boost relations with Turkey at a summit with Erdoğan later this year.

As part of a renewed drive to build "a ring of friends" on the EU's borders, European Commissioner Johannes Hahn said the EU-Turkey summit, due to take place by the end of this year, was also likely to seal an accord to curb migration flows to Europe. "There is new momentum in the EU-Turkey relationship," Hahn told Reuters in an interview on Wednesday, saying he would also propose opening new talks on Ankara's stalled EU accession process.

"It is about a fresh start in our relationship with Turkey in a very comprehensive manner and I hope this can be confirmed at this summit," he said. Facing its biggest refugee crisis in decades, the European Union proposed the summit with Erdoğan to meet Ankara's demands to accelerate Turkey's accession to the bloc.

The EU has offered Turkey 3 billion euros ($3.2 billion) in financial aid to keep some 2.2 million Syrian refugees within its borders in return for quickening EU accession talks and speeding up visa liberalization for Turkey's citizens visiting Europe.

"Such a summit is a good opportunity to announce a deal. I still expect this before Christmas," Hahn said, adding that Ankara's request for setting up a "safe zone" inside northern Syria is not part of the talks.

Hahn said Turkey was an EU candidate country that had to meet EU standards if it wanted to join the bloc and that the best way to do so was by having negotiations and meeting goals. Hahn said he would propose to EU governments that Turkey start negotiations with the bloc on applying EU rules regarding economic and monetary policy.

However, opening talks on additional policy areas, or chapters, depends on the situation with EU member Cyprus and the latest United Nations-led talks to reunite the island, which has been split between Greek and Turkish Cypriots since 1974.

Foreign Minister Feridun Sinirlioğlu and EU Minister and Chief Negotiator Beril Dedeoğlu were also present at Erdoğan's meeting with the EU leaders on Monday. Diplomatic sources spoke to Daily Sabah and said that at the end of the meeting Erdoğan principally agreed with the EU refugee action plan and the EU assured him it would open new chapters to accelerate accession talks.

The EU refugee action plan offers 3 billion euros to Ankara in return for systematizing the refugee flows to Europe. According to the plan, Ankara would use the EU financial support for the care and registration of refugees and EU countries will accept a certain number of refugees each year. The source also indicated that Turkey and the EU will hold a summit in Brussels on the crisis on Nov. 29, at which time the EU refugee action plan is expected to be sealed. The EU will also hold an inter-governmental meeting in December regarding Turkey's EU negotiation process to open Chapter 17 on economic and monetary policies. Chapter 22, which covers regional policy and coordination of structural instruments, was the last chapter opened in November 2013. The opening of a new chapter following a two-year hiatus is considered a sign that accession talks are getting back on track.

Sources added that Ankara also requested EU leaders enable the opening of at least two more chapters, Chapter 23 on judicial and fundamental rights and Chapter 24 on justice, security and freedoms, to revitalize the negotiations process. The European Commission's 2015 Turkey Progress Report, which was released on Nov. 10, already proposed to open Chapter 17 and stated that the opening benchmarks for Chapters 23 and 24 on the rule of law still need to be defined so as to provide Turkey with a road map for reforms in these essential areas.

The issue of an early implementation of Turkey's readmission agreement for third countries was also discussed at the meeting. Accordingly, Ankara accepted to implement the agreement by the end of 2016. In return, EU leaders agreed to speed up the enactment of the visa-free regime for Turkish citizens to the Schengen zone.

After Turkey and the EU reach a final agreement on Nov. 29 in Brussels, it will need to be ratified by the government leaders. European Commission Vice President Frans Timmermans, who visited Ankara last week, will present the agreement to the European Council in December to seek unanimous approval.

Overwhelmed by the largest refugee crisis since World War II, the European Union was hoping to see a stable government in Turkey, putting all of its plans on hold with Ankara until after the Nov. 1 elections. EU leaders reiterated the importance of Ankara coping with the crisis and decided to organize a summit that Erdoğan will likely attend. Ankara is now seen as the EU's most vital partner in tackling the refugee crisis.

Amid debates about how to ease the worsening crisis, the 28-country union is also faced with the possible collapse of its Schengen system, which allows EU citizens to travel without visas within EU borders. EU Council President Donald Tusk argued that saving the system "is a race against time," and added: "Without effective control of our external borders, Schengen will not survive. We must hurry, but without panic."