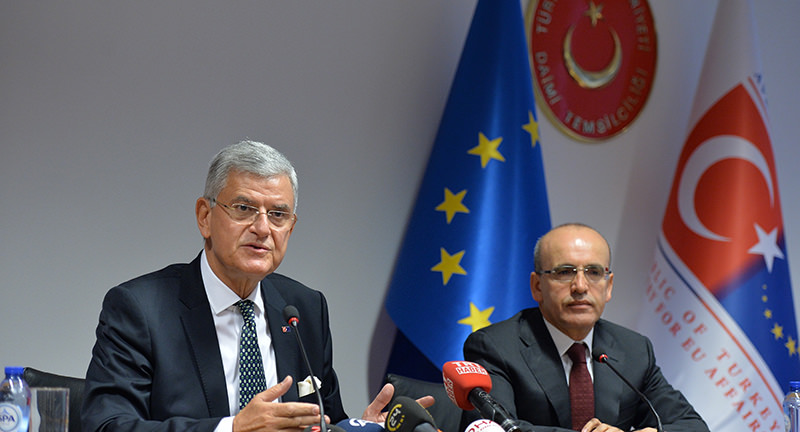 
"The EU-Turkey Intergovernmental Conference opens negotiations on Chapter 17 in accession talks," said the current EU president in Luxembourg, referring to one of the 35 chapters Turkey must complete to join the 28-nation bloc.

Chapter 17, which aims at bringing Turkey in line with the EU's economic and monetary policy and guaranteeing independence of the central bank, is the first chapter to be opened in two years and raises the total number of chapters opened so far in the accession talks to 15 out of 35.

Turkey has had a new chapter in its EU accession talks opened following talks with the EU that gained momentum after EU leaders met in Brussels on Nov. 29 with their Turkish officials. The opening of Chapter 17 on economic and monetary policy will have a major influence on the future of bilateral relations.

The Turkish delegation, including Mehmet Şimşek, the deputy prime minister in charge of the economy; EU Minister and Chief Negotiator Volkan Bozkır and Foreign Minister Mevlüt Çavuşoğlu, went to Brussels on Monday for the opening of the new chapter. Speaking at a joint press conference before the meeting with EU officials, the Turkish officials said this needs to be considered a very significant moment for the future of Turkish-EU relations.

Şimşek said that Turkey has the strong foundation required to fulfill this chapter and that the quality of institutions are significant to ensure its permanent stability.

"We have a very comprehensive reform program; these are all reforms that will positively influence [Turkey's accession] process with the EU," Şimşek said and added: "I believe the revitalization of the accession process will have a positive reflection on strong investments in Turkey."
He said that Chapter 17 will have a direct impact in the lives of people in Turkey.

"[Chapter] 17 is a significant one because it is about price stability, micro-financial stability; it's about stable sustainable [and] balanced growth. My government is committed to solidifying the central bank independency," Şimşek said.

The new chapter is to bring Turkey in line with EU economic and monetary policy, as part of the country's plan to join the 28-nation bloc. The chapter includes compliance with the Copenhagen criteria, a full and freely functioning market economy.

"Turkey does not have major shortcomings regarding this chapter," Şimşek said.

Bozkır said in the joint press conference with Şimşek in Brussels that the opening of the chapter on economy is a "crucial moment" for the country's future EU membership.

In an interview with the Turkish broadcaster NTV later on Monday, Bozkır said that talks between Ankara and the European Union about updating Turkey's customs union with the EU will begin next year.

The opening of the new chapter marks not just the first formal discussions since 2013, but what many in Brussels see as a fresh start for Turkish-EU ties after years of uneasy relations.

Underlying this change is Turkey's promise to help stem the flow of migrants to Europe in return for cash, visa-free travel and renewed talks on joining the European Union, to which Ankara formally started its membership talks a year ago.

France's minister for European affairs, Harlem Desir, said he expected to see a "willingness to implement reforms in Turkey that contribute to the modernization of Turkish society and the Turkish economy."

Ankara says it is also quite determined to maintain the fresh start in relations with the EU.

Previously, speaking after the third meeting of the Reform Action Group (RAG) in Ankara under his chairmanship on Friday, Prime Minister Ahmet Davutoğlu said that his ruling party needs opposition parties' assistance in Parliament to meet the deadlines agreed with the EU such issues like visa liberalization, the refugee action plan and opening new chapters to accelerate Turkey's accession to the EU.

The main topic of the RAG meeting was Turkey's EU accession process. The reforms called for by the election manifesto of the Justice and Development Party (AK Party) and anticipated by the EU were reportedly discussed at the meeting.

Additionally, the Reform Monitoring Group (RMG) meetings, the last of which was held in Erzurum on July 23, 2014, were replaced by the RAG following the approval of Cabinet members. A new period has commenced with the formation of the RAG. From now on the RAG will not only monitor the political reform process in Turkey, but also actively engage in the preparation of reform drafts, the enactment phase of legislation and implementation.

Turkish-EU relations have gained new momentum since Turkey signed the EU refugee action plan at a joint summit in Brussels on Nov. 29.
However, the Cyprus issue remains a major obstacle to Turkey's EU accession plans, as several chapters, including Chapter 15 on energy, are blocked by EU-member Greek Cyprus.

Out of 35 policy chapters, so far 15 chapters have been opened and 17 remain blocked, including Chapter 26 on education and culture.

Speaking on a live TV show, Kotzias said that the Greek government is not receiving enough support from the European Union and Athens is not going to take initiative on its own to tackle the problem. He added that no date has been scheduled for the invitation and that it will happen in mid-February.

Tsipras visited Turkey last month and met with Prime Minister Ahmet Davutoğlu in Ankara where the two leaders held a joint press conference. While the ongoing refugee crisis topped the agenda for the meeting, Tsipras and Davutoğlu announced that a joint mechanism like a working group between related ministries of the two countries will be established in efforts to find a solution to the crisis. Tsipras said that mutual cooperation between Turkey and Greece would change the dynamics in Europe. Agreeing with Davutoğlu on the refugee crisis, Tsipras said that the EU must take responsibility concerning the refugee crisis and the human tragedy that is being experienced on the Aegean Sea. He also said that there is a strong need for cooperation in fighting
terrorism.
Last Update: Dec 14, 2015 9:51 pm
RELATED TOPICS