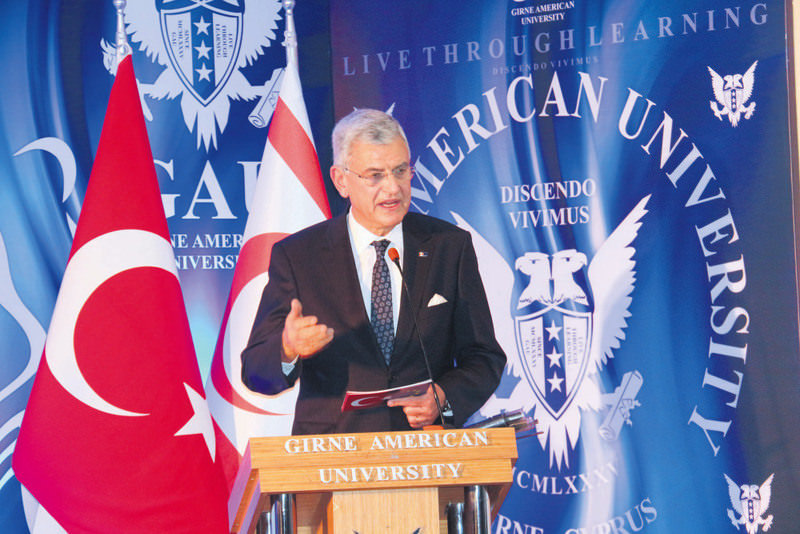 by Ali Ünal Jan 09, 2016 12:00 am
Turkey's EU Minister and Chief Negotiator Volkan Bozkır said on Thursday that the European Union has avoided open criticism of ongoing military operations against the PKK terrorist in southeastern Turkey.

"The EU is itself fighting against terrorism. Every country is responsible for the protection of their citizens, and the right to take some precautions when their security is threatened," Minister Bozkır told a group of journalists in Eskişehir. "Using terms of democratic autonomy, some traitors have hid behind these words and started an operation that aims to divide Turkey like cantons in Syria. Ankara has declared that it would not allow it and began to clear those districts by security forces," he said.

Stressing that security forces have gained ground in their fight against terror, Minister Bozkır stated that he expects the districts affected will be cleared of terrorists and life in the region will soon be returned to normal. "I hope that all of the barricades will be removed, the region will be cleared of terrorists, all schools will be reopened and very soon, all our citizens will live in peace. Under these conditions, the EU has nothing to say and there has not been any criticism directed at Turkey in this matter," Bozkır added.

As part of the EU Refugee Action Plan sealed between Turkey and the EU in November 2015, Turkey accepted the implementation of the readmission agreement in September 2016, instead of September 2017. Touching upon this issue, Bozkır said that European and Turkish public had mistakenly assumed this agreement will require all illegal immigrants that have reached Europe to be sent back to Turkey; he stressed that such assumptions are wrong. "Turkey will accept those refugees from Europe that went through our country. However, a commission will review all asylum claims by undocumented immigrants. Turkey will accept them if the commission, which will be run by the General Directorate of the Immigration Administration, affirms that their claims are right."

Asserting that the process for EU liberalization of Turkish visas is on track and that Turkey will implement all reforms and regulations on schedule, Minister Bozkır said Parliament will prioritize the drafting of 11 critical bills required by the EU, including anti-discrimination, protection of personal data and political ethics laws. In response to a question regarding support from opposition parties for the EU reform process, Minister Bozkır stated that leaders of the main opposition Republican People's Party (CHP) and Nationalist Movement Party (MHP) had expressed their support to the EU reforms during meetings with Prime Minister Ahmet Davutoğlu last week.

"There are 72 criteria that need to be fulfilled for visa-free travel to Europe. We are planning to complete the legislation process within Parliament by the end of February, or the middle of March latest. The EU Commission will publish a report regarding Turkey's performance at the end of March, thus the reforms should be done before that," Minister Bozkır added.

Regarding whether or not the Schengen zone is collapsing in Europe, Bozkır said that in previous years there have been several examples of border control being implemented in the Schengen area for security reasons, and; therefore, this crisis will not lead to its demise.

Recalling that Turkish-EU relations have gained momentum since the EU-Turkish refugee deal was signed in November, Bozkır said that the opening of Chapter 17 in December will mark Ankara's readiness to open five additional chapters in the first half of 2016.
RELATED TOPICS