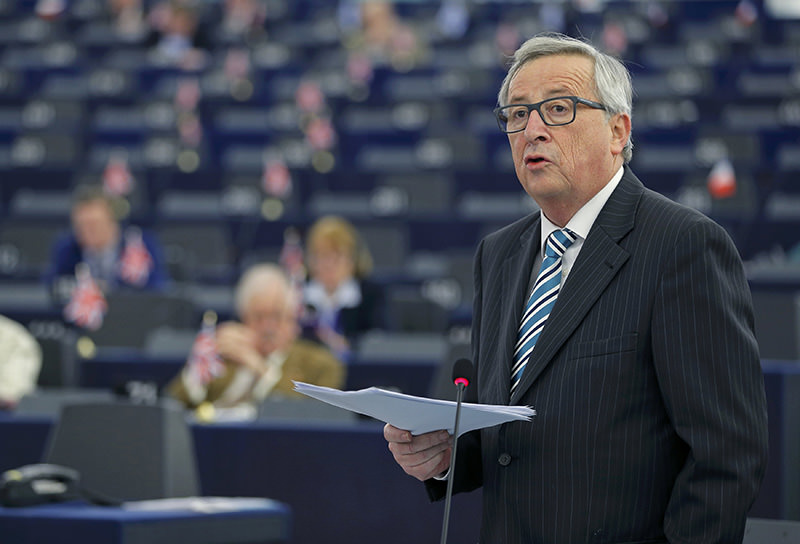 European Commission President Juncker addresses European Parliament in Strasbourg, France, February 3, 2016 (Reuters)
by Feb 03, 2016 12:00 am
Turkey will receive 3 billion euros (3.3 billion dollars) in refugee aid from the European Union as Italy has dropped its veto on the issue, the head of the bloc's executive, Jean-Claude Juncker, said Wednesday.

The aid was promised in November, but Rome wanted the bill to be covered wholly by the EU's central budget. In the end, member states will have to partly put cash in, but the money will be discounted from EU deficit calculations.

"Turkey is hosting almost 3 million refugees on its territory, and it is therefore a done deal that the 3 billion (euros) in aid for the Syrian refugees in Turkey will be provided by the European Union and member states," Juncker told the European Parliament in Strasbourg, France.

"I emphatically welcome that the Italian government has also stepped up to this necessary show of solidarity," the European Commission president added.

Last week Italian Prime Minister Matteo Renzi said he expected the controversy to end before Thursday, and during a visit to Ghana on Monday, said his country no longer had reservations. "We will give our contribution to solve the issue posed by Turkey," he said.

Italy-EU ties have been tense recently, as Renzi has criticized Brussels over its supposed inflexibility on economic austerity, bank bailouts and inability to mount a joint response to Europe's migration crisis.

Juncker and Renzi are due to have clarification talks in Rome later this month. The head of the EU executive has complained about the Italian premier "vilifying and criticizing the [EU] commission on every street corner."
Last Update: Feb 03, 2016 8:04 pm
RELATED TOPICS