EU-Turkey refugee summit should be about more than just refugees, Turkish official says 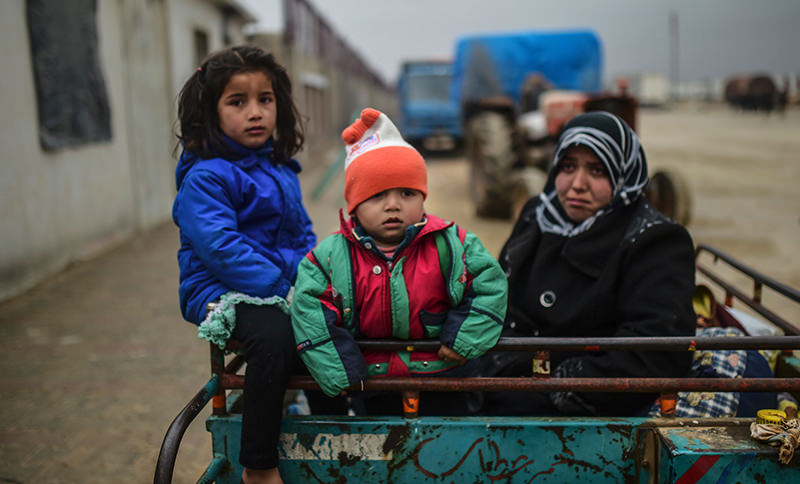 Refugee children arrive a the Turkish border crossing gate as Syrians fleeing the northern embattled city of Aleppo wait on February 6, 2016 in Bab-Al Salam, near the city of Azaz, northern Syria (AFP Photo)
by Daily Sabah with AFP Mar 03, 2016 12:00 am
The summit expected to be held next week between Turkey and the European Union should not only be about refugees, but also consider Turkey's relations with the bloc, a Turkish official said on Thursday.

The March 7 meeting in Brussels is seen as a crucial chance for EU and Turkish leaders to take determined and coordinated steps to stop the flow of refugees from Turkey across the Aegean Sea to EU states.

But the summit should also take in other key issues, including the opening of new chapters for Turkey's longstanding EU membership bid, the senior government official said.

"We do not want the summit to be only about refugees. It should be something different and take in all the aspects of Turkey-EU relations," said the official, who asked not to be named.

As well as looking at the opening of new chapters, leaders should also discuss visa-free travel to EU states for Turkish citizens, a goal that Ankara hopes to reach by October, the official said.

EU Migration Commissioner Dimitris Avramopoulos last week warned that failure to make "convergence and agreement" with Turkey at the summit on stemming the flow of migrants would spell "disaster" for the bloc.

EU President Donald Tusk is due to meet Turkish leaders this week in Turkey ahead of the summit.

Some EU leaders have on occasion expressed frustration with Turkey's inability to stop thousands of refugees-- from Syria and other troubled states -- leaving its shores daily in crammed and unsafe boats in a bid to reach EU member Greece.

But the official said Ankara was doing all it can and it was "impossible to stop everyone in a day".

"We have a determination to stop this illegal migration," added the official.

Brussels and Ankara agreed a deal in late November to stop the flow under which Turkey was to receive thre billion euros ($3.3 billion) in financial aid to help mainly Syrian refugees in Turkey.

The funds have yet to be transferred but the official played down reports that they had been held up, saying the allocation was undergoing a "needs assessment".

"We want to have a say on where this money is going to be spent," said the official, adding that Turkey's priority was to see it spent on education for Syrian refugees.

Turkey has spent over $8 billion for the refugees, a figure higher than international aid to the displaced, and has been praised for its state-of-the-art camps standing out among others elsewhere. Turkish authorities have called on other countries to do more, both to help the refugees and to end the Syrian crisis to curb the flow of Syrians entering Europe.
Last Update: Mar 03, 2016 1:50 pm
RELATED TOPICS