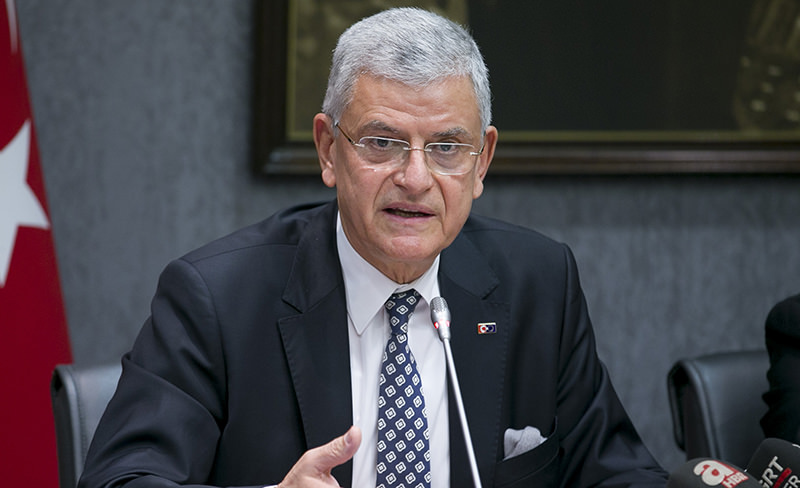 EU Minister Bozkır made it clear that the re-admission agreement between Turkey and the EU does not include Syrians and Iraqis. He also said the deal will go into effect once the EU bloc grants visa-free travel for Turkish citizens

Turkey's EU minister Volkan Bozkır on Thursday warned that Turkey has the right to cancel the readmission agreement if the bloc does not grant visa-free travel for Turkish citizens as pledged.

Speaking in a panel at German Marshall Fund policy think tank, Volkan Bozkır said the readmission agreement and the removal of visa requirements for Turkish citizens visiting the EU were signed at the same time.

The visa removal is expected to take place at year's end.

A readmission agreement signed between Turkey and the European Union set to take effect in June does not include illegal migrants from Syria and Iraq, the EU Minister said Thursday.

When the deal is implemented, the EU will have the ability to return illegal migrants -- who traveled through Turkey -- to Turkey in order to be processed before they are sent back to their country of origin. Citizens of Iraq and Syria, which make up the majority of illegal migration, are not part of the deal.

It was not correct to assume that 1 million illegal migrants would be returned to Turkey the day the agreement went into effect because the process was not that easy, he said.

"For each person, a file will be sent, including the name and identity, and documents prove which shows that that person went to Europe over Turkey," according to Bozkır. "Then, a commission in Turkey will examine these cases and if this commission admits, these illegal migrants will be sent to Turkey."

The readmission agreement was signed in 2013 and went into effect in 2014.

A new agreement signed in November that shortened the transition time for the deal to take effect, allows Turkish citizens to enter the Schengen area without a visa.

Bozkır said Turkey added a 'geographical reserve' clause to the 1951 UN Refugee Convention by which Turkey placed a geographical limitation on country and origin.

The condition can be removed only if Turkey becomes a member of the European Union.

"Therefore, the Syrians and Iraqis [two geographical reserve countries] are not within the scope of the readmission agreement. Illegal migrants from other origin countries than Syria and Iraq will be able to be returned," he said.

Regarding a readmission agreement with Greece signed in 2001, long before the refugees began flowing into Europe, Bozkır said the same rules of the UN Convention were valid for the readmission with Greece.

Bozkır's statements came after 300 illegal migrants were recently returned from Greece to Turkey as part of the agreement.

They do not include Syrians and Iraqis who were accepted by Turkey in order to be sent to their original countries, according to Bozkır.

Turkey has spent approximately $10 billion to care for its Syrian "guests," according to Bozkır, who said 3 billion euros the European Union gave Ankara in exchange for help with dealing with European migration is not a solution to the problem.

"This 3 billion euro is not given to Turkey," he said. "European Union is kind of trying to unburden by giving this 3 billion euro to Turkey to be spent for our Syrian guests. This aid will be used mostly to build schools and hospitals, and improving the conditions in the refugee camps in Turkey."

He added that Turkey on several occasions warned European countries of an illegal migrant wave due to the Syria crisis before the rush but the EU failed to take measures. "If this fighting continues, if Aleppo falls, one and half a million people get risked of becoming refugees or migrants. Or, if worse things happen, three and a half million people might be moving to the south or north," he said.

"This cannot be absorbed and no country has the power to do this." He also stressed that creating a safe zone in Syria was the "only correct solution which would give better results" to the refugee crisis.

But meanwhile, he said, the "Frankenstein" Syria's Bashar Assad must go.

Bozkır added that refugees left Syria because of Assad's bombings and killings and would not return if he were still there.
"We must create safe zones in Syria so we can construct houses, we can construct towns and then some of these people can be carried to those safe places," he said.

European Union leaders on Monday will hold a special summit with Turkey on the migration crisis. A separate meeting without Turkey will be held later this month.

The EU hopes for a reduction in the number of refugees at the border between Turkey and Greece.

Turkey and EU has established new mechanisms, including high-level economic cooperation, upgrading customs union and abolishing visa requirements for Turkish citizens, Bozkır said, and "Turkey is now starting to feel to be again in the family."

With respect to the Cyprus issue, which has been a barrier for Turkey's EU membership, Bozkır said it was the best moment to say that Cyprus problem was "solvable".

"More solvable than the Syrian crisis, or the Ukrainian crisis or the Palestinian problem and there is a real chance that we can see the solution of the Cyprus problem this year," he said.

Once the Cyprus problem is solved, the most important feasible way of exporting natural gas in the eastern Mediterranean area -- where Cyprus island lies -- is going to be transmitted via Turkey, just 64 kilometers (40 miles) from the island.

This will be an opportunity not only for the region but for the European Union and Turkey, he added.

Turkey has tried to become a full member of the European Union since 1987, with formal negotiations initiated in 2005. One of the conditions the EU requires from Turkey for membership is a solution to the Cyprus issue.

Cyprus is divided into two parts.

Greek Cyprus, the southern two-thirds of the island, claims sovereignty over the entire island as the Republic of Cyprus and enjoys international recognition, joining the European Union in 2004 despite assurances from the EU community that a permanent peace would first need to be established on the island beforehand.

The northern third of the Island, Turkish Republic of Northern Cyprus, is only recognized by Ankara and remains largely isolated.