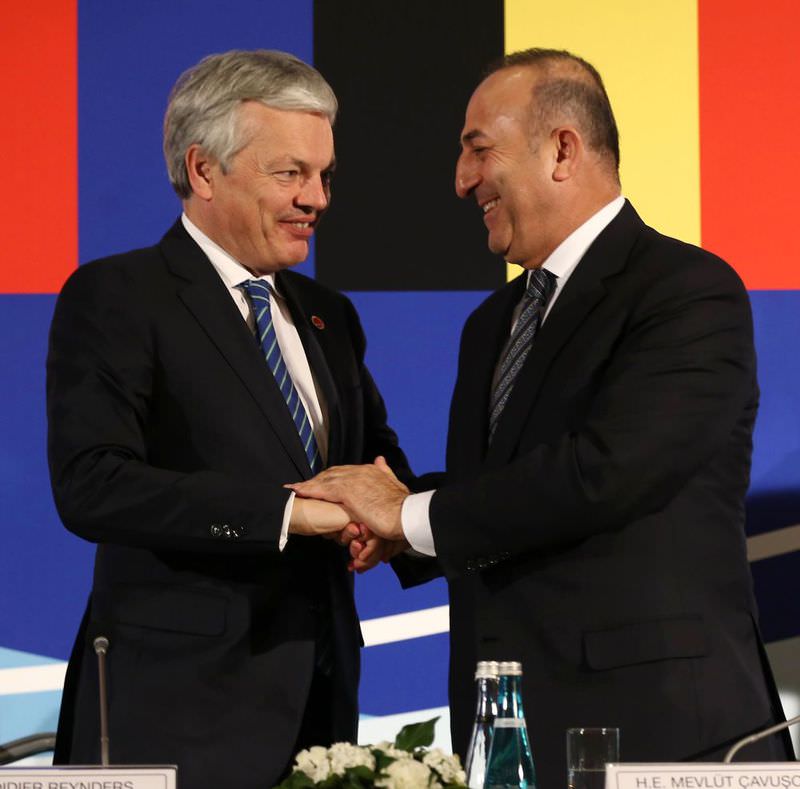 by Merve Aydoğan Mar 10, 2016 12:00 am
Foreign Minister Mevlüt Çavuşoğlu provided details of Wednesday's ministerial meeting between Belgium and Turkey at a joint press conference where he said that there is serious perception management against Turkey in the EU about providing Ankara with 3 billion euros of monetary funding for Syrian refugees. He criticized Belgian authorities for failing to show the same sensitivity against the PKK and Revolutionary People's Liberation Party Front (DHKP-C) as it does to the extradition of common criminals.The Turkish delegation at the meeting included Çavuşoğlu, Justice Minister Bekir Bozdağ, and Interior Minister Efkan Ala and the Belgian delegation included Deputy Prime Minister Jan Jambon, Minister of Foreign and European Affairs Didier Reynders, Justice Minister Koen Geens and Secretary of State for Asylum Policy and Migration Theo Francken. The meeting was held for the third time at the ministerial level to maintain dialogue between the political authorities of both countries on issues of common interest, primarily on the fight against terrorism, police and judicial cooperation, consular matters and migration management.

According to the joint statement released, the ministers welcomed the new momentum in Turkey's EU accession process and addressed the migration and refugee crisis in the region "as a growing challenge that deepens in parallel to the continuation of the conflict in Syria, and that can only be overcome through genuine burden-sharing and cooperation." While the Belgian delegation praised Turkey's efforts in taking in more than 2.7 million Syrian refugees, Çavuşoğlu said that the refugee crisis has become a global issue.Çavuşoğlu criticized comments made against Turkey regarding the EU's 3 billion euro funding for Ankara. He said: "We believe that the accusations and comments made against Turkey about the 3 billion euros of funding are unfair. It is perceived as if the money is being given to Turkey or Turkey is begging for money. We have not asked nor did we beg for monetary funding from any international organization when [Ankara] spent $10 billion for the Syrians."

Stressing that Turkey is not in need of any money, Çavuşoğlu reiterated that the money will be used to enhance the living standards of the Syrian refugees living in Turkey.

Çavuşoğlu said that Turkey and Belgium strive to further enhance their bilateral relations and that they have agreed to manage a better mechanism as counterparts. Çavuşoğlu also expressed gratitude for Belgium's support of Turkey in its EU accession process, adding that the two countries cooperate in intelligence and information sharing as well as taking solid steps against terrorism and foreign fighters. He said that there are no judicial obstacles to the extradition of criminals between the two countries and that Belgium shows the necessary sensitivity towards extradition of common criminals. However, he strongly criticized Belgium for failing to show the same sensitivity toward the PKK and DHKP-C.

"We cannot say that Belgium shows the same sensitivity toward the matter of PKK and DHKP-C members. We must refrain from applying double standards to terrorist organizations and terrorists. We welcome the recent court orders taken against the foreign terrorist fighters, but showing tolerance and differentiating PKK and DHKP-C terrorists from foreign fighters is simply a double standard," Çavuşoğlu said.
RELATED TOPICS