Turkey will take back refugees in tens of thousands, not millions, EU min. says 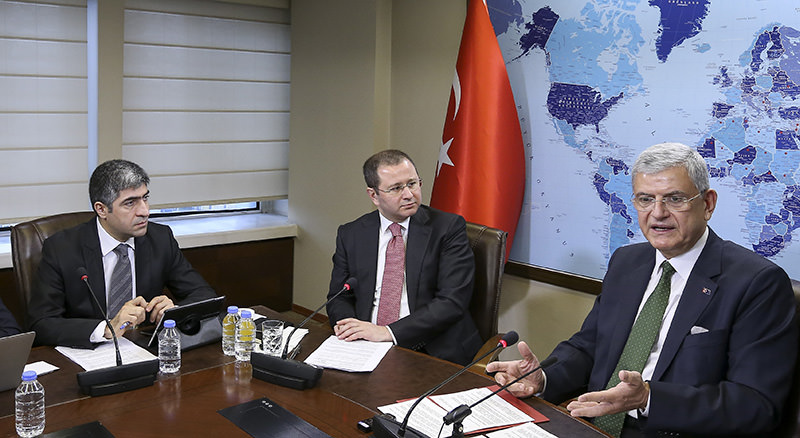 EU Minister Bozkır said that an agreement between Turkey and the EU to readmit migrants does not apply to those already on Greek soil, and underlined that the number of migrants that Turkey may need to take back might be tens of thousands, not millions

EU Minister Volkan Bozkır said on Thursday that Turkey will not take back refugees who are already on Greek islands and that the country would take back tens of thousands, rather than hundreds of thousands or millions of refugees back under a proposed deal with the European Union.

Speaking to the Anadolu Agency, Bozkır said that it would be unacceptable for the EU to pick and choose refugees based on their professions.

''You can't pick 10 engineers and seven doctors'' Bozkır said, and added that the choices would be overseen by the The Office of the United Nations High Commissioner for Refugees (UNHCR).

A readmission agreement signed between Turkey and the European Union set to take effect in June does not include illegal migrants from Syria and Iraq, the EU Minister previously said.

When the deal is implemented, the EU will have the ability to return illegal refugees -- who traveled through Turkey -- to Turkey in order to be processed before they are sent back to their country of origin. Citizens of Iraq and Syria, which make up the majority of illegal migration, are not part of the deal.

For its part, the EU is calling on Turkey to crack down on people smugglers and stem the flow of refugees coming into Europe via Greece.

Last year, more than 850,000 refugees arrived in Greece from Turkey by sea, according to the International Organization for Migration. So far this year, nearly 132,000 have arrived by the same route.

Despite insisting on the relaxation of visa regulations for Turkish nationals wanting to travel to the EU, Bozkir indicated the deal would not be reciprocal.

"Even after visas [for Turks] are all abolished and become a visa with work permit, we might [still] need to require visas from EU countries' citizens because the main flow will not be from Turkey into Europe but from Europe to Turkey," he told the meeting of senior Anadolu Agency editors.

Another key proposal from Turkey at Monday's meeting between Prime Minister Ahmet Davutoglu and EU heads was for the EU to pay Turkey a further 3 billion euros ($3.3 billion) to cover the care of refugees. The union had previously agreed an earlier 3 billion euros for the same purpose.

Turkey currently hosts nearly 3 million refugees, most of them Syrian.

Turning to questions about the distribution and monitoring of the payments, Bozkir said the money could be supervised by the EU representative office in Turkey or the World Bank. "I don't think we will have problems," the minister said.