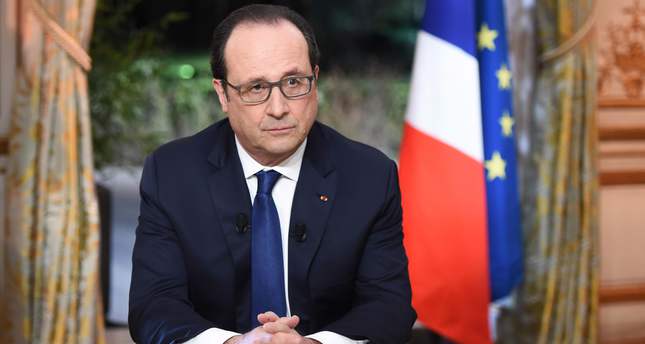 French President Francois Hollande delivers an allocution and answers to journalists questions, from the Elysee Palace in Paris, France, 11 February 2016. (EPA Photo)
by Mar 12, 2016 12:00 am

French President Francois Hollande said Saturday after meeting with Social Democrats from across Europe that the bloc should not rush to concessions to strike a controversial deal with Turkey on migration.

"Turkey is committed to taking back refugees and migrants that have irregularly reached Greece," Hollande said. "[But] there should be no concession on the questions of human rights or the criteria for liberalizing visas."

He added that the questions would be a "factor of clarification and transparency between Turkey and Europe" during upcoming discussions. Next week, a summit is planned in Brussels to work through the migration plan.

EU lawmakers and human rights groups have expressed concern over the planned deal, under which Ankara would take back migrants arriving in Greece via the Aegean Sea, in exchange for the European Union resettling asylum seekers currently living in Turkey via official channels.

Hollande called for the EU to protect its external borders in order to maintain free movement in the Schengen area, and said that border protection is also necessary to avoid drownings in the Mediterranean Sea.

"Every country has to engage and do its part to receive refugees," Hollande said, citing a European relocation plan under which France commitment to receive 30,000 refugees over two years.

"But in order for [the plan] to be implemented quickly and entirely, there must be protection of the exterior borders," he added, after meeting with leading European Social Democrats, including Italian Prime Minister Matteo Renzi and German Vice Chancellor Sigmar Gabriel.

The president of the European Social Democrat coalition in Brussels, Italian Gianni Pittella, warned after the meeting that "infringement procedures should be foreseen" against members of the bloc that do not uphold the refugee relocation system, which was agreed to in September.

"In order to save Europe from populist movements, we cannot compromise with our values," said Pittella in a statement. "Our family cannot remain silent on the migration crisis, while other important leaders express themselves by words and actions... disregarding the need for European solidarity and responsibility."

There has been reluctance from Eastern European countries such as Slovakia, the Czech Republic and Poland to accommodate Muslim asylum seekers, creating a major hurdle for the EU in its attempts to redistribute migrants.

The Paris meeting was aimed at defining the centre-left message on the influx of migrants and asylum seekers to Europe, which brought more than 1 million people to its shores last year, with over 140,000 more following since January.

Centre-left leaders also discussed issues that have taken a back seat to the migration crisis, such as spurring lagging economic growth and bringing down youth unemployment, as well as Britain's planned referendum on an exit from the European Union.

The so-called Brexit has been driven in part by eurosceptic parties, on the rise across Europe alongside parties with anti-migration platforms.