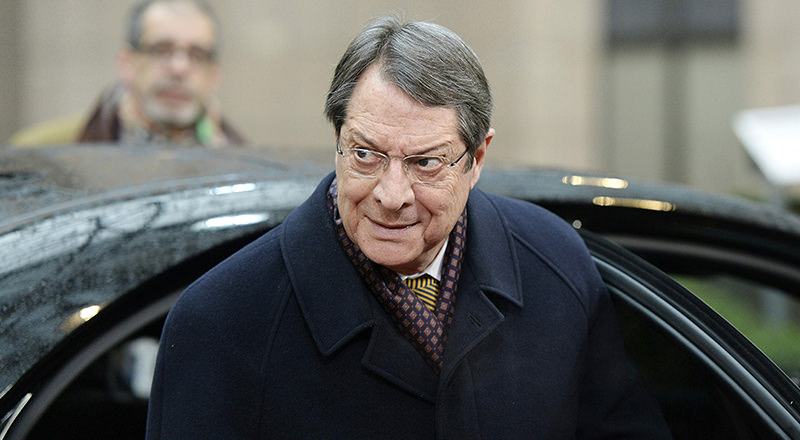 The President of Cyprus Nicos Anastasiades arrives for an EU leaders summit with Turkey on migrants crisis on March 7, 2016 at the European Council, in Brussels. (AFP Photo)
by Daily Sabah with Agencies Mar 15, 2016 12:00 am

Greek Cyprus on Tuesday ruled out expediting Turkey's long-stalled talks to enter the EU unless Ankara fulfills its obligations to recognize the country. The Greek Sypriot move came at a time German Chancellor Angela Merkel is trying to make all EU member states to accept a draft deal with Turkish government to solve Europe's migrant crisis.

Ankara wants its citizens to have visa-free access to the EU's Schengen zone by June and to open new chapters in its long-stalled EU accession process in return for assistance in stemming the human tide of refugees through Europe in one of the continent's worst humanitarian crises since World War II.

"I conveyed to [European Council] President [Donald] Tusk our position that the Republic of Cyprus does not intend to consent to the opening of any chapters if Turkey does not fulfill its obligations as described in the negotiating framework," Greek Cypriot President Nicos Anastasiades told reporters after a meeting with Tusk in Nicosia.

Kemal Öztürk, a columnist for the Yeni Şafak daily, has recently told Daily Sabah that the EU cannot solve the crisis without Turkey and it is the EU that is in deep trouble. Asserting that the EU has a leadership problem, Öztürk said: "Turkey's diplomacy and policy has proven to be creative and productive. Turkey's intention to resolving the crisis is successful diplomacy. My only worry is about the EU even though Turkey stands firm with its strong will and policies for a solution."

The EU needs a deal more than Turkey, Hilal Kaplan, a columnist for the Sabah and Daily Sabah dailies said. She said the EU is divided, which is a sign of its inability. Enes Bayraklı, a foreign affairs specialist at the Political, Economic and Social Research Foundation (SETA) said it now comes down to talks among EU member states to determine the fate of the deal.

Recent talks between Anastasiades and Turkish Cypriot President Mustafa Akıncı to produce a federal state with two autonomous entities have been positive and many of those involved have said they expect an agreement on reunifying the island to be made by the end of the year.

Greek Cyprus has been an EU member since 2004. Turkish Cypriots are considered EU citizens even though they live in territory not under the control of Greek Cyprus. Cyprus has been divided since 1974. The stalled negotiations resumed last year following Akıncı's election in April.

Recently, EU Minister Volkan Bozkır said the EU-Turkey deal was the best moment to say that the Cyprus problem was "solvable."

"[It is] more solvable than the Syrian crisis, or the Ukrainian crisis or the Palestinian problem, and there is a real chance that we can see the solution of the Cyprus problem this year," he said.