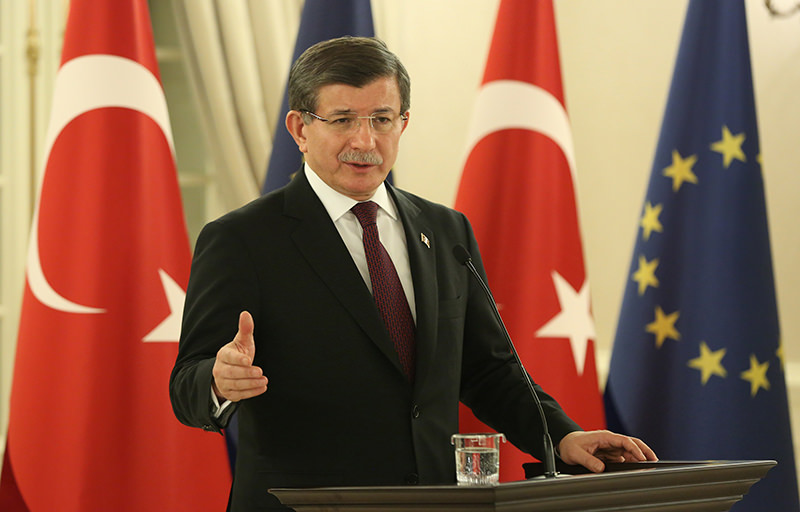 Prime Minister Ahmet Davutoğlu said on Tuesday the aim of a 6 billion euro ($6.66-billion) agreement with the European Union on refugees was to reduce illegal migration and make passage to Europe safe.

Turkey did not bargain over money and does not see the issue as a financial one but as a humanitarian one, Davutoğlu said in a joint press conference with European Council President Donald Tusk in Ankara.

During the conference, European Council President Donald Tusk emphasized his solidarity with Turkey in the aftermath of the Ankara bomb attack that killed 37 people.

"We cannot accept terrorism as the new normal," he said.

Tusk expressed his condolences to the victims and families affected by "yet another appalling terrorist attack here in Ankara".

"No matter how many times it has happened, we will never get used to it and we will always fight it," Tusk said. "Let me reiterate this pledge and stress that we stand together in the fight against terrorism, yesterday, today and tomorrow."

Turkish and EU leaders will reconvene at a summit this week to finalize the agreement to reduce refugee flows to Europe after reaching a draft deal this month.

Within the scope of the new EU-Turkey deal, a readmission agreement between Greece and Turkey was signed. The agreement states that migrants who cross the Aegean will be returned to Turkey under the readmission procedure.

The agreement came in a week where European Union leaders agreed on a wide range of proposals with Turkey to solve the migration crisis, including the return of all irregular migrants, accelerating the visa-liberalization process for Turkish citizens and sharing the work of hosting Syrian refugees.

In return, Ankara requested visa-free travel for its citizens by end of June and an additional three billion euros ($3.3 billion) to meet the needs of Syrian refugees in Turkey.

Several figures in a Washington-based Center for Strategic and International Studies (CSIS) report from February show that the level of involvement in easing the burden on Turkey and other neighboring countries is not enough and that Ankara needs much more help to meet the needs of the refugees who reside within its borders now comprising 2.9 percent of the total population, according to the report.

Considering the amount of funds Ankara has received from the Central Emergency Response Fund (CERF) between 2011 and 2015, the report says that Turkey has enjoyed much less aid than Iraq, Jordan and Lebanon even though it has more refugees.

The report says that $212.4 million worth of allocations have been spent over four years by the CERF, which is managed by the Office for the Coordination of Humanitarian Affairs (OCHA) and receives voluntary contributions year-round from United Nations member states and observers, regional governments, the private sector, foundations and individuals. Lebanon has received $39.5 million, Jordan $27.2 million and Iraq $20.6 million while Turkey has received $11.1 million.

The report also says that Turkey was not funded by the Regional Refugee and Resilience Plan (3RP) in 2015. The plan required $4.5 billion for 4.39 million refugees in Syria's surrounding countries and 1.3 million internally displaced persons (IDPs) in need. Turkey, however, received 37 percent of the aid and was left with a $624 million shortfall.

Since then, more than 250,000 people have been killed and more than 10 million displaced, according to the U.N.