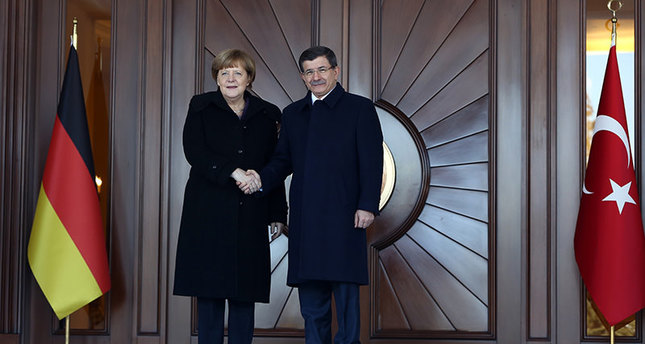 Ahead of the Turkey-EU summit, German Chancellor Merkel slammed the EU for failing to share the refugee burden and praised Turkey for its efforts. Officials have told Daily Sabah that Ankara is confident Merkel will convince the rest of the bloc to accept the action plan

As the European Union's 28 member states and Turkey are due to meet at another special summit in Brussels on Friday to address the overwhelming refugee and migrant crisis, German Chancellor Angela Merkel on Wednesday criticized the bloc for failing to tackle the burden. Sources from the Turkish Prime Ministry told Daily Sabah that Ankara is fully behind Merkel ahead of the summit.

Speaking in German parliament to inform deputies about the upcoming summit and a draft action plan with Turkey, Merkel slammed the EU for its inability to cope with the crisis, saying, "It does not bring honor to Europe to have struggled in sharing the [refugee] burden as a union of 28 member states and 500 million citizens."

Having harshly criticized the EU for its ineffectiveness, Merkel praised Turkey for its efforts on the issue. "What Turkey has achieved for over 2 million refugees, precisely put some 2.7 refugees, for years cannot be appreciated enough at all," she asserted, adding that the burden has to be shared fairly.

Following Merkel's speech, sources from the Prime Ministry told Daily Sabah that Ankara is confident that she will convince the rest of the bloc on an action plan. Ankara considers Merkel as a partner and believes she will handle the crisis in the EU caused by differences of opinion on the action plan, the sources added.

Prime Minister Ahmet Davutoğlu at a Turkey-EU summit on March 7 in Brussels surprised the member states with Ankara's new and unexpected plan.

The plan pledges that Turkey will take back all refugees from Greece that have made the dangerous journey across the Aegean. However, it asked for double the financial aid for refugees in its refugee camps and faster visa liberalization for Turkish citizens as well as opening more chapters than previously announced in its EU accession process. Because all member states have to vote unanimously in favor of an action plan, there was not a definite agreement between Brussels and Ankara. Hungary, for example, was a fierce opponent of a potential deal.

Hungary's Prime Minister Viktor Orban was very vocal about an action plan between Turkey and the EU. "They would hang me from the nearest lamppost here in Budapest if I agreed to something like that," he said.

Greek Cyprus also made clear its reservations regarding the deal. "I conveyed to [European Council] President [Donald] Tusk our position that the Republic of Cyprus does not intend to consent to the opening of any chapters if Turkey does not fulfill its obligations as described in the negotiating framework," Greek Cypriot President Nicos Anastasiades told reporters in Nicosia on Tuesday.

EU Commission Vice President Frans Timmermans touched on the discussed action plan as well. Even though Timmermans called the plan "very complicated both in legal terms and in logistical terms," he said there is "no palatable alternative."

President of the European Council Tusk, who will host the summit, has admitted the deal needs to be "re-balanced," especially in terms of whether it is legal when it comes to the right to seek asylum and how such a request is processed.

As some member states fiercely fight the action plan with Turkey, Merkel is expected by Ankara to step up her game at the summit. Member states are due to hold meetings today before sitting at the table with Ankara on Friday.

The German chancellor has been defending her plan to collaborate with Turkey on the refugee crisis from the very beginning. Calling Turkey "the most important transit land" in the crisis, Merkel has recently said that she has no other plan than the one that puts Turkey at the center.