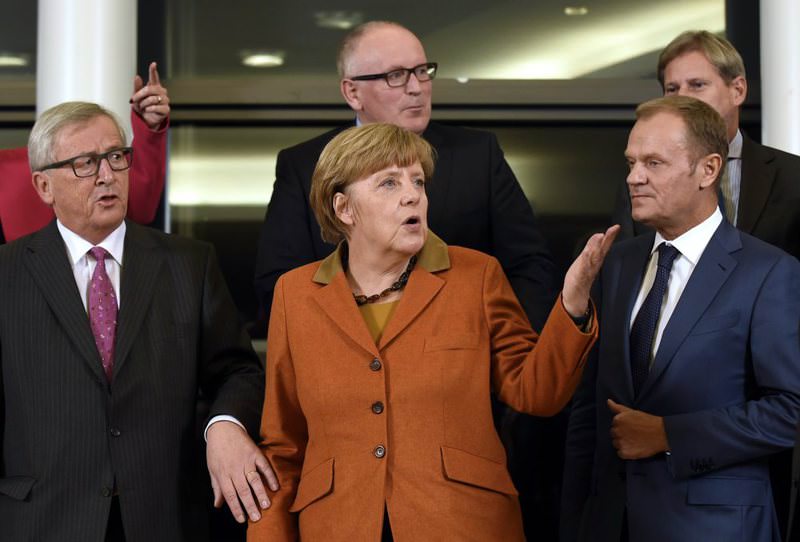 German Chancellor Merkel will travel to Gaziantep province on next week Saturday along with representatives of the European Union to stem the flow of migrants to Europe. Since the Turkey-EU deal went into effect, illegal migration into Europe has decreased dramatically

Top EU officials and German Chancellor Angela Merkel will visit Turkey on April 23, in the wake of a deal struck with the country to stem migration flows. Merkel, along with EU President Donald Tusk and European Commission Vice President Frans Timmermans, will travel to the province of Gaziantep, Tusk's office announced. They said the trip is meant to be a "follow-up" to the EU-Turkey deal, without giving further details. Gaziantep is located in southern Turkey near the border with Syria, and is home to many Syrians who have fled the conflict in their home country. Refugee camps run by Turkey's disaster management agency are located along the border, although only about 12 percent of the Syrian refugees in Turkey live in these camps.

The EU-Turkey migration deal struck on March 18 seeks to put an end to a migration influx which saw more than one million people reach European shores last year. Most of them came via Turkey to Greece and then sought to move on to wealthy northern European countries – notably Germany.

Earlier this month, President Recep Tayyip Erdoğan said Turkey will not implement the Turkey-EU deal on stemming the illegal flow of migrants to Europe unless the 28-nation bloc fulfills its side of the agreement.

The EU and Turkey reached an agreement in March to reduce the worst migration crisis that Europe has seen since World War II with EU countries tightening checks on the migration flow and sending refugees who arrive in Greece back to Turkey in exchange for legally processed refugees.

In return, Turkey is bounded to receive benefits including visa-free travel for its citizens to the EU's Schengen zone, which in the accord is promised at the latest by June 2016, together with receiving a total of 6 billion euros up to the end of 2018 to spend on meeting Syrian refugees' needs in Turkey. "There are precise conditions. If the European Union does not take the necessary steps, then Turkey will not implement the agreement. Everything that has been promised [must be put into action by the EU], everything that is specified under the accord," Erdoğan said.

"Some 3 million people are being fed on our budget," he said, referring to Syrian refugees. "There have been promises, but nothing has come for the time being." He said Turkey has no right to turn a deaf ear to humanitarian crises in the region, stressing that the country has embraced those victimized by barrel bombs and airstrikes since the beginning of the Syrian civil war.

He said all the leaders that he talked with at the Nuclear Security Summit in March told him that no country could do such a thing without support. "We have received lots of thanks for our action on the refugees and in the fight against terrorism. But we are not doing this for thanks," he said.

The first group of migrants from the Greek island of Lesbos was bound for the Turkish town of Dikili in the western province of İzmir earlier this month. Three vessels docked in Dikili with 202 migrant passengers on board, mostly from Pakistan and some from Bangladesh. The migrants were later transferred to the northwestern province of Kırklareli.

Officials from parties to the migration agreement have said that the deal has started to show significant results.

Over the past year, hundreds of thousands of refugees have crossed the Aegean Sea to reach Greece. This has placed a huge strain on the austerity-hit EU member and threatened the EU's internal open-border system, as countries to the north of Greece impose border restrictions.