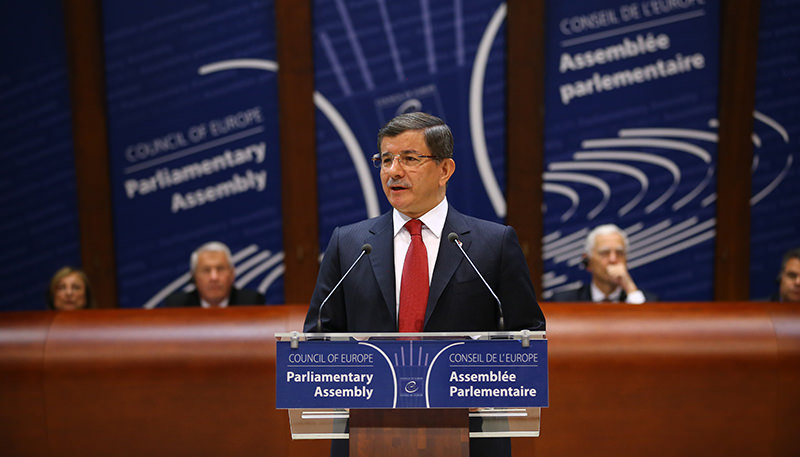 Friends of the Republic of Turkey have failed to share the burden of the migrant crisis and have left countries in the region on their own, Prime Minister Ahmet Davutoğlu contended in a speech at the Parliamentary Assembly of the Council of Europe (PACE) in Strasbourg on Tuesday.

"Unfortunately, our friends have not shouldered the responsibility of sharing the burden [and] countries in the region were left alone," Davutoğlu said, adding that the migrant crisis is a problem both for Turkey and the European Union.

Explaining that he did not come to Strasbourg to be praised for what Turkey has done so far for refugees, Davutoğlu said: "I did not mention what we have done and will do for our Syrian brothers and sisters for it to be appreciated. We just share this with the international community to draw attention to the seriousness and extent of the problem and the significance of sharing the burden."

Having levied criticism at the 28-nation bloc for not sharing Turkey's burden and leaving the region alone, Davutoğlu said Turkey's doors to refugees have always been open and will remain so. "We will carry on this humanitarian attitude in the coming period as well," he added.

Touching on the recent deal reached between Ankara and the EU, Davutoğlu asserted that a real outcome will be seen if it is implemented efficiently. "However, problems in Syria must be solved to reach a permanent solution," he added.

"It is a must to create an environment in their own countries where they can stay if mass migration waves are to be prevented," Davutoğlu said, adding that Syria is afflicted by the cruelty of an oppressive regime.