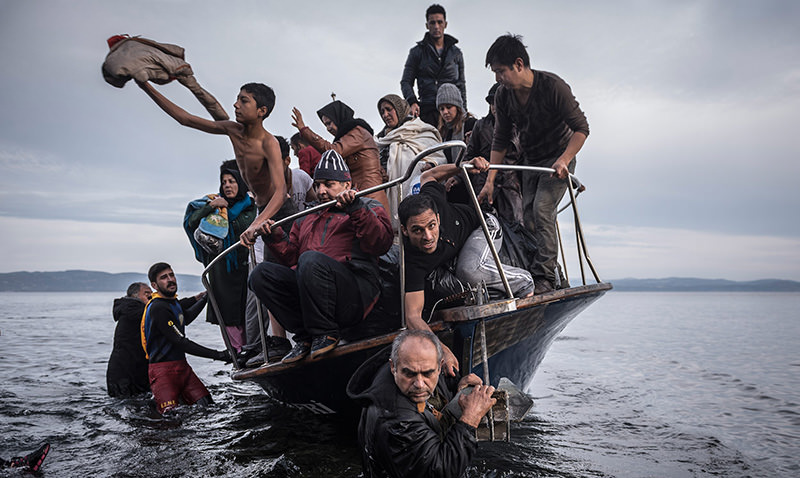 The refugee crisis in Europe has demonstrated the close ties between Turkey and the continent as well as the interdependence of Turkey and the EU, an EU commissioner has told Anadolu Agency.

Kristalina Georgieva, the European budget and human resources commissioner, was speaking after an EU-Turkey deal to resettle refugees fleeing war zones such as Syria came into effect.

Under the scheme, Turkey has agreed to take failed asylum seekers from Greece in return for the EU accepting Syrian refugees from Turkey's massive refugee population.

"We are neighbors," Georgieva, a Bulgarian economist who took up her post in November 2014, said. "We are interconnected, depend on each other. For some years we have drifted a bit away from each other and what the refugee crisis has reminded us is how much our fates are connected."

Speaking in Washington, where she attended meetings of the International Monetary Fund and the World Bank, Georgieva added: "We want to see relations with Turkey strengthened in the context of dealing with a common problem.

"It's a global problem -- the displacement of people. We know that the number of displaced people in the world, unfortunately, is likely to continue to grow because of violent extremism, conflicts and also because of natural disasters including climate change, so as a global community we need to build ways in which we share responsibility… and help each other."

As well as resettling Syrian refugees from the 2.7 million living in Turkey, the deal with the EU also offers Turkey 6 billion euros ($6.78 billion) to pay for the care of refugees. The EU has also promised to speed up the country's EU membership bid and ease EU visa restrictions for Turkish travelers.

The deal has been portrayed as an attempt to choke people smuggling operations in Turkey, which have seen traffickers send desperate refugees across the Aegean Sea in often unseaworthy vessels.

According to the International Organization for Migration, 376 people have drowned or gone missing in the Aegean so far this year.

"It is in the interests of both Europe and Turkey to fight the illegal trafficking of people because it is terrible for the people that are in the hands of traffickers, because it is a business that is growing [with] criminals gaining cash and very often investing it in radicalization and terrorism," Georgieva said.

The European Commission, the EU's executive body, has reported that the deal has already seen a decrease in the number of people irregularly crossing the Aegean from Turkey to Greece.

"The first result of our cooperation with Turkey is that the message is starting to get through that turning to smugglers is the wrong choice to make," commission vice president, Frans Timmermans, said Wednesday. "In the past three weeks we have seen a sharp decrease in irregular arrivals, which now needs to go hand-in-hand with opening up the legal channel of resettlement to those in need of protection."

In a statement, the commission said 325 irregular migrants had been returned to Turkey while 103 Syrian refugees were resettled in the EU under the one-for-one scheme.

Georgieva said Turkey and the EU "shared very clearly a common vision" that migration should not be viewed as a negative development, pointing to the positive economic impact of migrants.

"It took the arrival of refugees on our territory in big numbers to recognize the scale and significance of this problem," she said, referring to the migrant crisis that gripped Europe last year and threatened some of the EU's basic principles such as the free movement of people.

"But now that we recognize it, like Turkey, in Europe, we are very active in addressing it at home, changing our asylum policies to harmonize them across member states, protecting our external borders so we can bring down internal borders again, fighting human traffickers and helping other countries like Lebanon and Jordan and Turkey, that are much more burdened than Europe, to cope."

She praised the states bordering Syria, who have taken in 4 million refugees, for what they have "done to open your hearts, to open your economies for the arrival of so many desperate, destitute people, [which] is service to humanity".

However, she warned that further migration was to be expected because of "shocks" caused by conflict, natural disaster and economic or financial crises.

Referring to her meetings in Washington, Georgieva, a former World Bank Group vice president, said the economy played an important role in dealing with the refugee crisis.

"When the economy is working well, it can cope better," she said.

"The discussions here in the IMF and World Bank meetings are about that -- how to make the world economy stronger, how to overcome the risks that we are now facing and how to build a more collaborative model, because one thing that is clear in a case of multiple shocks is that none of us, not even the biggest and the strongest, can cope on its own."