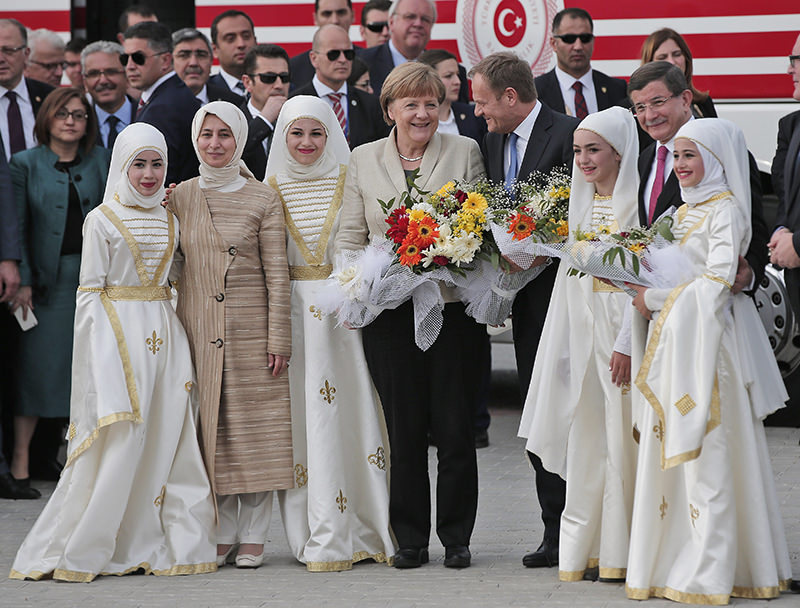 Merkel, along with European Council President Donald Tusk and European Commission Vice President Frans Timmermans, visited the Nizip refugee camp in the southern province of Gaziantep near the Syrian border, which is home to many Syrians who have fled the conflict in their war-torn country.

In a statement on Friday, German Federal Government spokesman Steffen Seibert said that the main focus of the visit will be the funding of projects for refugees in Turkey, indicating that the three officials also plan to launch a project especially designed for refugee families and their children.

"Turkey has demonstrated immense efforts regarding the refugee issue. Now, we share this burden and we are working for making the lives of the refugees better."

After talking with refugees in the camp, Merkel will later hold a meeting with Prime Minister Ahmet Davutoğlu and hold a joint press conference at Gaziantep University, Seibert said.

"The illegal migration activities on the Aegean Sea have dramatically declined since the Turkey-EU deal went into effect," he said.

The EU-Turkey migration deal struck on March 18 seeks to put an end to the migration influx, the worst migration crisis that Europe has seen since World War II. One million people reached European shores last year, most of them coming from Turkey to Greece where they aimed to move on to wealthier European countries – notably Germany.

In addition to resettling some of the 2.7 million Syrian refugees living in Turkey, the deal with the EU also offers Ankara 6 billion euros ($6.78 billion) to pay for the care of refugees. The EU has also promised to speed up the country's EU membership bid and ease EU visa restrictions for Turkish travelers if Turkey meets the criteria on time.

The first group of migrants from the Greek island of Lesbos was bound for the Turkish town of Dikili in the western province of İzmir earlier this month. Three vessels docked in Dikili with 202 migrant passengers on board, mostly from Pakistan and some from Bangladesh. The migrants were later transferred to the northwestern province of Kırklareli.

Speaking to reporters in Strasbourg on Wednesday, Davutoğlu said that illegal migration in the Aegean has almost ended as Ankara fulfilled its part of the agreement with the EU and speculations indicating that the deal malfunctions is out of possibility.

"We successfully managed the logistics of this issue and organized the groundwork and mechanisms effectively. The number of refugees heading to Turkey is around 300 while some of them in Turkey are leaving the country. A well-calculated action plan is being implemented. There have been no malfunctions so far."