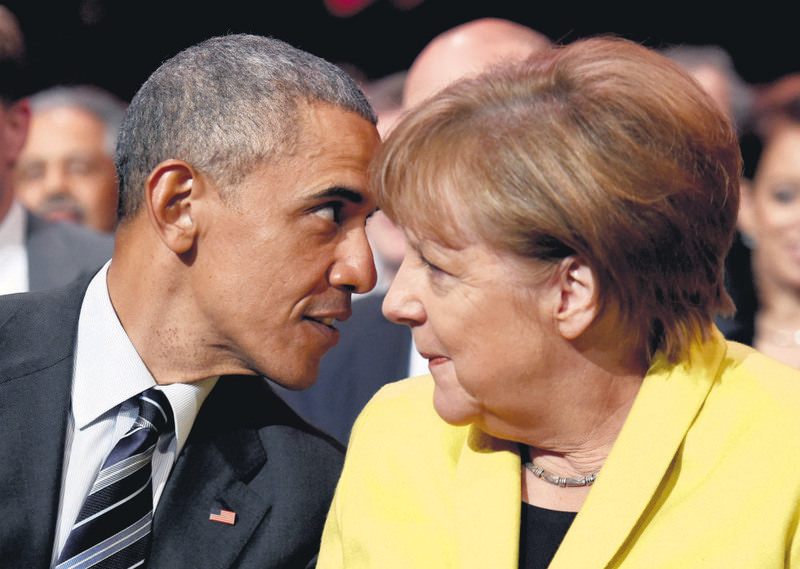 by Daily Sabah with Wires Apr 26, 2016 12:00 am
U.S. President Barack Obama told the Bild daily that the migration burden needed to be properly shared - the U.S. is committed to taking in at least 10,000 Syrians this year - and that "the recent agreement between the EU and Turkey is a step toward a more equitable way of sharing this responsibility." Obama made an impassioned plea on Monday for European unity in the face of rising populism and skepticism, warning this was a "defining moment" for the continent. "A strong and united Europe is a necessity for the world," Obama said in the German city of Hanover. Visiting a region reeling from the migration crisis, economic stagnation and facing the prospect of Britain abandoning the European Union, Obama warned that "progress is not inevitable".

Contrasting the prosperity of Europe today with the wars and hardship of the last century, Obama called on Europeans reject the "us-versus-them" politics that has fuelled the rise of the far right in countries from Poland to France.

"Perhaps you need an outsider, somebody who is not European, to remind you of the magnitude of what you have achieved," he said, a day after the anti-immigration far-right triumphed in a presidential vote in Austria.

Rise of extreme nationalism in Europe

Obama also recalled the devastating consequences of "intolerance and extreme nationalism" that drenched Europe in blood during the 20th century. "In the last century, just twice in 30 years, the forces of empire and intolerance and extreme nationalism consumed this continent and cities like this one were largely reduced to rubble," Obama said. "Tens of millions of men and women and children were killed."

While admitting there could be frustrations with European institutions, he argued that "turning inward" was not the answer to Europe's problems.

As rightwing populism gains ground in parts of the continent in response to growing Islamic radicalism, he urged Europe to remain open.

"I want you to remember that our countries are stronger, they're more secure and more successful when we integrate people of all backgrounds and faiths, and make them feel as one. And that includes our fellow citizens who are Muslim," he said.

On a visit to Britain ahead of his arrival in Germany, the US president had also waded into an increasingly-bitter debate over the UK's membership in the European Union, urging Britons to vote against leaving the bloc in a June referendum.

For much of Obama's seven years in the White House his relationship with Europe has been uneasy.

Obama began his presidency with Europeans revelling in Washington's more relaxed approach to foreign policy than under his predecessor George W. Bush.

But since then, Obama's star has dimmed, and the US president has become frustrated with Europe's inability to move quickly in response to the global recession or to the threat from extremists.

In a mark of that frustration, Obama bluntly told his audience that Europe needs to do more to shoulder the collective security burden.

"Europe has sometimes been complacent about its own defence," Obama said, repeating a long-standing call for NATO allies to increase defence spending to at least two percent of economic output.

More than half a century after the end of World War II, much of the continent, including economic power Germany, remains firmly under the umbrella of security provided by the United States.

Obama needs support from European allies to handle foreign policy challenges in Russia and the Middle East, and he used his platform in Hanover to announce deployment of an additional 250 U.S. forces to Syria.

But the president said Europe generally could do more to prepare for its own defence and to fight Islamic State. He repeated his call that NATO members step up their contributions and warned of a tendency to get complacent about defence needs.

"We need to stay nimble and make sure our forces are inter-operable and invest in new capabilities like cyber defence and missile defence," Obama said.

"That's why every NATO member should be contributing its full share, 2 percent of GDP, towards our common security - something that doesn't always happen and, I'll be honest, sometimes Europe has been complacent about its own defence."
Last Update: Apr 26, 2016 4:40 pm
RELATED TOPICS