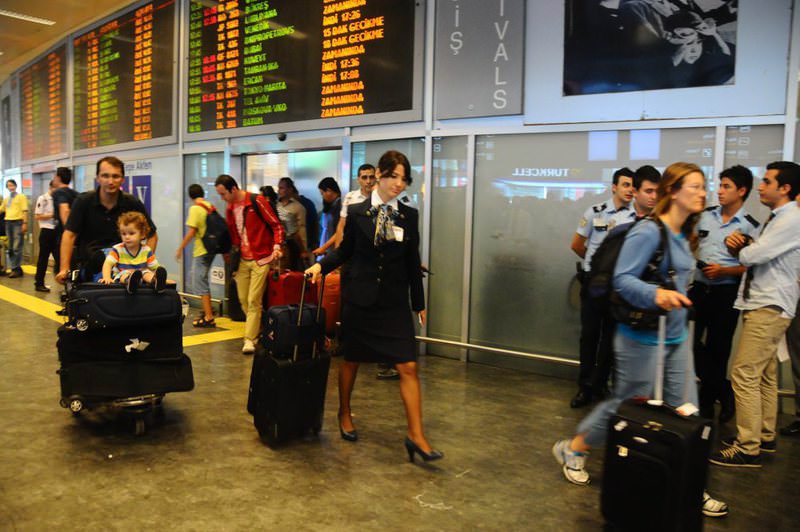 The European Commission is expected to declare today that Turkey has met all criteria for visa liberalization, but some EU sources say conditional approval is on the table. In comments to Daily Sabah Turkey's EU deputy minister, said that Ankara will not accept conditional approval under any circumstance

The European Commission is expected to declare today that Turkey has met the 72 benchmarks for visa liberalization that will allow Turkish citizens to travel in the Schengen zone without obtaining a visa now that all the EU's criteria have been discussed and approved by Parliament. Touching on possible results of today's European Commission report, Turkey's EU Deputy Minister Ali Şahin said that Ankara will not accept conditional approval from the European Commission under any circumstance after speculation has circulated in some media outlets coming from EU sources. "We stated that Turkey does not accept conditional approval in various platforms.

There is only one condition in this process, which is the EU-Turkey Readmission Agreement signed in 2013 and approved in Turkish Parliament," Şahin said, adding that Turkey has fulfilled all the criteria and the ball is now in the EU's court. "Turkish people want to trust and believe in the EU. The process functions as a confidence vote in the EU. In the event of an unexpected result by the European Commission, Turkish people's trust in the EU will be shaken." When asked what the process would be if the European Commission approved visa liberalization, Şahin said if the commission finds that Turkey has met all the criteria, the approval process by European parliaments and EU member states will officially start.

"The report by the commission will determine and shape the results from European Parliament and the European Council," he said.

He said that Ankara does not expect any failure in the process, stressed that even though there are some voices against visa liberalization and asserted that EU figures have complete clarity on the issue.

Concerning any problem that could arise from EU members such as Greek Cyprius, Şahin said that no negative stance is expected.

When asked what will happen if the European Commission decides against dropping the visa requirement, Şahin said: "We never think of a negative decision, but it should not be forgotten that the EU needs Turkey as much as Turkey's needs to the EU."

Referring to his meeting with the chairman of the European Parliament Committee on Foreign Affairs, Elmar Brok, over irregular migration in Brussels, Şahin said: "I told Mr. Brok that if the EU accepts 3 million Syrian refugees, Turkey can immediately deliver financial aid that amounts to around 3 billion euros to the EU with no obligations or conditions attached." He added that Turkish-EU relations are bilateral, not one-sided.

A Prime Ministry official in comments to Daily Sabah yesterday on the benchmarks said that the last two criteria, which are political ethics and a law to establish a police monitoring commission, were discussed in Parliament and are expected to get approval after Daily Sabah went to the press. Among the criteria that the EU expects Turkey to implement by the end of June, which is the date that visa requirements would be lifted, are extending EU data protection standards to security services, anti-terrorism laws, protection of minority rights, cooperation with the EU on judicial issues, migration flow management in line with EU standards, strengthening border controls to prevent illegal migration, transparency of funding for political parties and giving Greek Cypriot nationals access to Turkey.

With the European Commission's recommendation on approving visa liberalization for Turkish nationals an important gauge in Turkey-EU relations, the decision for a visa-waiver scheme for Turkey will be given in late June. In the event the EU does not grant visa liberalization, Turkish-EU cooperation on migration in the Aegean Sea would be seriously harmed, according to critics speaking to Daily Sabah.

In a move to cooperate to prevent Syrian refugees who attempt to find shelter in the EU, Ankara started to take hundreds of Syrian refugees back who had crossed the Greek lands by boat from Turkey in early April. The EU, in exchange for Turkey's step, promised to revive Turkey's EU accession talks and give Ankara up to 6 billion euros in aid for Syrian refugees as well as visa-free travel for Turkish nationals expected to begin in July. Turkish officials have said the EU-Turkey deal on migration will be "null and void" if visa liberalization is not granted, leading to more migration issue on the Aegean Sea to Greece.

Visa liberalization is part of a broad migrant deal between the 28-nation bloc and Turkey. Following the deal, Europe has seen a dramatic decrease in illegal migration and human trafficking. On some days, the Greek islands have reported that not a single migrant had arrived in the country from Turkey. Turkish officials warned their European colleagues several times that the migrant deal with the EU will fail if visa liberalization is not carried out.
RELATED TOPICS