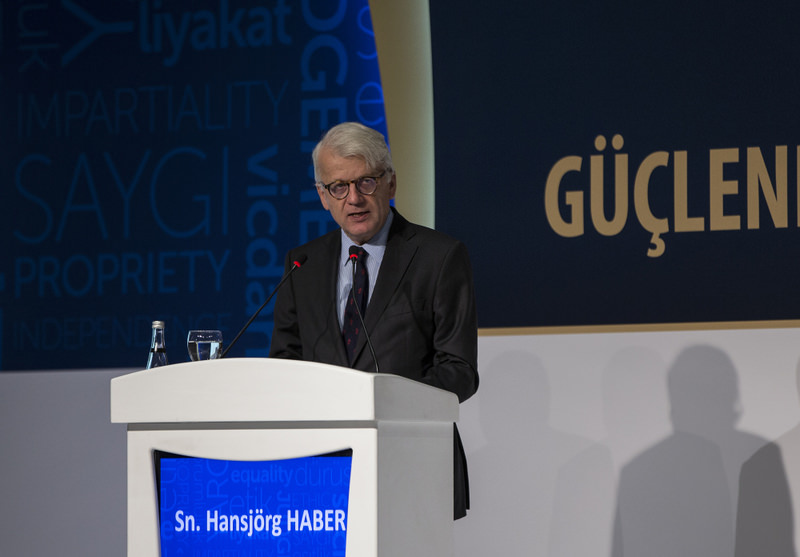 The head of the EU delegation to Turkey said Ankara should be proud of its bureaucracy since it successfully passed almost all of the benchmarks for visa-liberalization in a short time. He said the EU is confident the new government will complete the remaining requirements

The head of the European Union's delegation to Turkey, Hansjörg Haber said that Turkey should be proud of what it has accomplished under time restraints in achieving all the required benchmarks for visa-free travel to the EU's Schengen zone.

Haber was speaking to media members on Friday during a background briefing on the process and the European Commission proposal regarding visa liberalization.

Haber stressed that "continuity is a must in technically finalizing the refugee agreement, which also includes visa liberalization, and fulfilling the necessary criteria." Haber also added that the EU expects "continuity" from the new government following Prime Minister Ahmet Davutoğlu's resignation. With the European Commission recommendation in its report to lift visa requirements for Turkish citizens traveling to the European Union's Schengen zone, and saying that Turkey has come a long way to meet the EU's 72 benchmarks, Haber said that the commission expects five legislative measures from Ankara.

Responding to a question regarding whether relations or visa liberalization with the EU will be affected following Davutoğlu's departure and announcement that he will not run for the leadership, Haber said: "We have worked well with the Turkish administration, as there has been good coordination and initiative taken on the refugee agreement proposed by the Turkish government under the Davutoğlu administration. In order to finalize the agreement, we need continuity and a willingness not only technically but also in fulfilling the required criteria. We expect this from the new government that is to be established as visa liberalization is something that both the Turkish government and the Turkish nation want."

Underlining that the process of visa liberalization began with President Recep Tayyip Erdoğan's initiatives in 2013, Haber said that the EU is confident that the new government will also show the same effort to achieve the same goals. The government during the last few months has worked long hours to fulfill the 72 criteria that were required by the EU, which Haber praised. "Turkey must be proud of what it could accomplish under this time pressure." However, as Haber reminded, the European Commission's report identified five outstanding benchmarks out of 72 yet to be met and set concrete measures that Turkey must meet in order to complete the remaining requirements.

One of the remaining requirements is the ensuring of an effective follow-up to the recommendations issued by the Council of Europe's Group of States against Corruption (GRECO). Additionally is the aligning of legislation on personal data protection to EU standards, notably to ensure that the data protection authority can act independently and that the activities of law enforcement agencies fall within the scope of the law as well as concluding an operational cooperation agreement with Europol. Offering effective judicial cooperation in criminal matters to all EU member states and revising legislation and practices on terrorism in line with European standards through better alignment of the definition of terrorism to narrow the scope of the definition and by introducing a criterion of proportionality are other legislative measures that are yet to be fulfilled.

Turkey's EU Minister and Chief Negotiator Volkan Bozkır said Ankara will not make any revisions to legislation and policies regarding terrorism as the country continues its intensive fight against terrorist organizations. Haber refused to give details on the EU's required revisions and said: "We will discuss this topic. Our criterion regarding this matter is clear and we must find a solution for this." He also said that the process for visa liberalization at the European Commission will take eight weeks as of May 4 and that the process will be finalized by June 29.
RELATED TOPICS