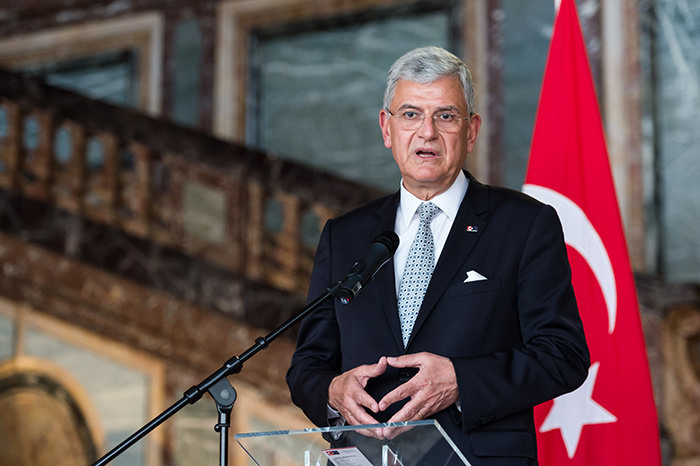 Turkey's EU Affairs Minister Volkan Bozkir addresses the media after a meeting with Belgium Foreign Minister Didier Reynders at the Egmont Palace in Brussels on Thursday May 12, 2016. (AP Photo)
by Daily Sabah May 13, 2016 12:00 am

The planned visa-free travel as part of the migrant deal between Turkey and the European Union is at an impasse and the European Commission must find a "new formula" to solve it, EU Minister and Chief Negotiator Volkan Bozkır said at a press conference in Brussels on Friday.

Bozkır said he is not very hopeful about the prospect of realizing a deal with the EU on granting Turkish citizens visa-free access to most of the bloc. "At this stage I would not say we are very hopeful," he said after talks with EU Enlargement Commissioner Johannes Hahn.

While Brussels is desperate for the deal to succeed, it also insists that Turkey meet 72 criteria, which include narrowing its anti-terrorism laws. Bozkır said that while officials in Ankara may work to align differences of opinion, anti-terrorism laws cannot be changed at a time when the country is fighting multiple terrorist organizations.

He asserted that it is impossible for Ankara to change the country's counterterrorism legislation. "Our assessment is that Turkey has done its best and fulfilled enough requirements. It is not a mathematical problem, but a political one."