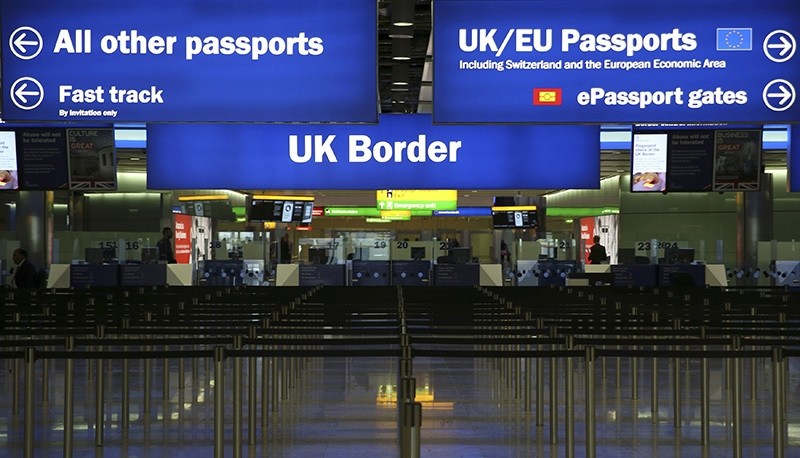 The British ambassador to Ankara warned his country in a recently leaked diplomatic telegram that Turkey could open its doors to refugees willing to go to Europe if visa-free travel is not granted to Turkish citizens. The European Union is expected to lift visa requirements for Turkish citizens by July as part of the deal reached on March 18

A recently leaked diplomatic telegram (DipTel) between British diplomats and government ministers was published in the Sunday Times.

According to the leaked teleegram, Richard Moore, the British ambassador to Ankara, is pessimistic about the visa liberalization process for the Turkish citizens. In the DipTel, he said: "If visa liberalization doesn't happen, an impetuous and riled [President Recep Tayyip] Erdoğan – prone to come out fighting when he feels 'betrayed' – could carry through his threat to 'open the flood gates' to Europe for migrants."

The telegrams give the impression the U.K. would allow 1.5 million Turkish citizens who have green passports to visit the U.K. without first getting a visa. In the leaked telegrams, Moore said: "One option would be to assess again the possibility of visa travel for Turkish special passport holders, which would be a risk, but a significant and symbolic gesture to Turkey.

Downing Street, however, issued a joint statement published by the foreign secretary, the home secretary and the British Embassy, denying the allegations that Britain will open its borders to Turkish citizens, claiming that the quotes in the leaked documents are specifically selected to give the false impression a plan to grant visa liberalization to Turkish citizens, which is "completely untrue." The statement further emphasized the fallaciousness of the claims, stating: "The government's policy is, and will remain, to maintain current visa requirements for all Turkish nationals wishing to visit the U.K., regardless of what arrangements other member states in the Schengen area may make with Turkey."

Describing the purpose of the DipTel as a tool for getting feedback about the position and views of foreign governments around the world, the statement said: "They are reports from our diplomatic posts, not statements of British Government policy." The full DipTel is about "working with the Turkish authorities to tackle illegal immigration via Turkey" and the decrease of the boat crossings from Turkey to Greece since the implementation of the EU-Turkey deal.

Claims that the United Kingdom would grant visa-free travel to 1.5 million Turkish citizens with special green passports were dismissed by senior cabinet ministers for being "completely untrue" and underscored that visa implementations will proceed as usual.

British Foreign Secretary Philip Hammond and Home Secretary Theresa May denied a report published in the Sunday Times that claimed British diplomats considered granting visa-free travel to 1.5 million Turkish citizens, but would not announce it until after the Brexit referendum.

The reports, based on leaked cables, claimed that visa liberalization would be a "significant and symbolic gesture to Turkey," which signed a readmission deal with the European Union to stop the flow of migrants to the EU.

In a joint statement, officials said that "selectively leaked quotes" have been used "to give a completely false impression that the U.K. is considering granting visa liberalization to some Turkish citizens."

The EU-Turkey deal, which also included visa liberalization for Turkish citizens, was hampered by the EU's insistence that Turkey make narrow the definition of terrorism in its anti-terrorism laws. However, Turkish officials have said that they will make no changes as long as the country faces active threats from terrorist organizations like DAESH, the PKK and the Syrian Kurdish Democratic Union Party (PYD).