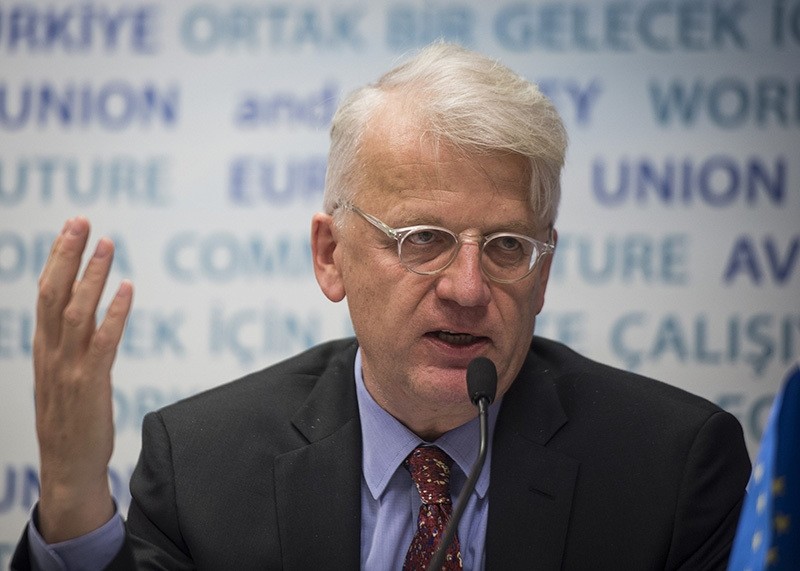 Hansjorg Haber, the head European Union delegation to Turkey, resigned from his duty on Monday, Reuters reported citing officials from the EU delegation.

Haber's controversial remarks had caused a diplomatic spat between Ankara and Brussels in May, at a time when the negotiations to finalize the crucial readmission deal was ongoing.

Speaking to a group of journalists, Haber pointed to the 72 benchmarks that Turkey has to fulfill for visa liberalization, saying that they had been clear since 2013. Haber then cited a Turkish proverb, "Starting like a Turk, finishing like a German," which suggests a strong enthusiasm to start doing something and continuing in a well-disciplined way to accomplish it. "It is the other way round here [in Turkey's EU bid]," he said.

Haber was also critical of Turkish President Recep Tayyip Erdoğan and government officials' stance when the negotations were coming to an end.

Volkan Bozkır, European Union minister and chief negotiator at the time, harshly criticized Haber for his remarks, which, according to him, belittled the Turkish people.

Stressing that Turkey and the EU are going through a rough time that cannot afford such reckless statements, Bozkır said he expects the delegation head to clarify the situation or do "what is necessary."