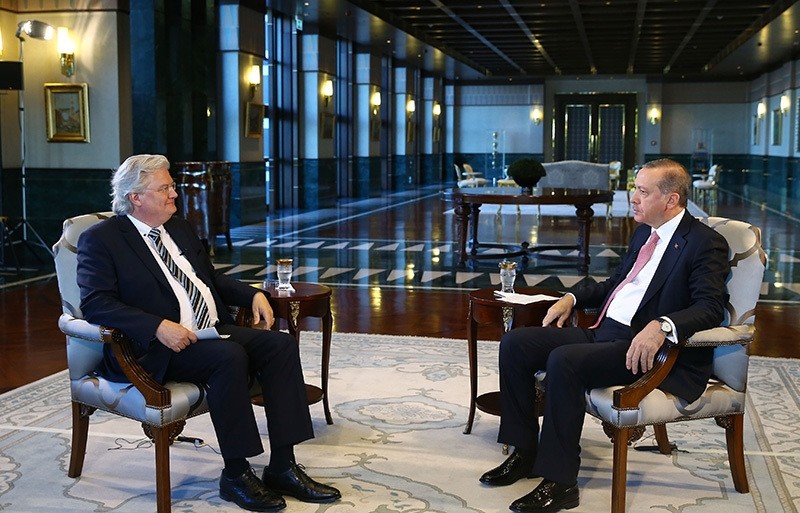 President Recep Tayyip Erdoğan late Monday railed at Germany for its indifference to the PKK and U.S.-based Gülenist Terror Organization (FETÖ) members and questioned the European Union's contribution to the anti-terror fight.

Speaking on German state broadcaster ARD Monday night, Erdoğan slammed the EU and Germany in particular, on the fight against terrorist organizations. "The PKK runs wild in Germany. [PKK] terrorists display images of the head [of the PKK] in Strasbourg, Brussels, European Parliament and around the European Human Rights building," Erdoğan said, asking how the EU helps the counterterror fight this way.

Continuing his staunch criticism of Berlin's insufficient fight against the PKK, Erdoğan said that most PKK terrorists have fled to Germany. "Germany lends these [terrorists] very significant support. I gave Chancellor [Angela Merkel] 4,000 documents regarding this. When I asked her about what they have done, she said that the judicial process was continuing," he said, adding that late justice is never justice.

Stressing that PKK terrorists live in Germany, France, Belgium and the Netherlands, Erdoğan said these countries do not extradite them despite Turkish intelligence providing necessary information.

Asserting that EU countries will find themselves in grave danger should they further fail to collaborate with Turkey, Erdoğan said the world should work together to tackle terrorism.

DEATH PENALTY A DEMAND OF THE PEOPLE

Upon a question regarding the recent debates in Turkey about a possible return of the death penalty for coup plotters, Erdoğan said Turkey is a democratic country where the demands of the people are heard.

Dismissing criticism from the EU that threatened Ankara with the suspension of its EU membership bid should Turkey reinstate capital punishment, Erdoğan said: "Look, we have been at the door of the EU for 53 years. We abolished the death penalty. What has changed? If you are in a democratic state, who has the say? The people have the say, right? What do the people say? The death penalty."

EU NOT KEEPING PROMISES AS PART OF MIGRANT DEAL

Erdoğan also said the EU is failing to keep its promises regarding the migrant deal, adding that Turkey delivers on its side of the bargain.

"I want to say one thing quite clearly: On the refugee issue, we will stand behind our promises," Erdoğan asserted.

"What we have promised to date applies. But a question to the Europeans: Have you stuck to your promises?" he asked, saying the EU had failed to provide Turkey with sufficient aid. "The West has unfortunately not been sincere thus far," he said.

On May 4, the European Commission proposed visa-free travel in the Schengen zone for Turkish citizens on the condition that Turkey fulfill the five remaining benchmarks, including measures to prevent corruption, data protection in line with EU standards, cooperation with the EU's Europol law enforcement agency and judicial cooperation on criminal matters with all EU member states.
Last Update: Jul 26, 2016 7:04 pm
RELATED TOPICS