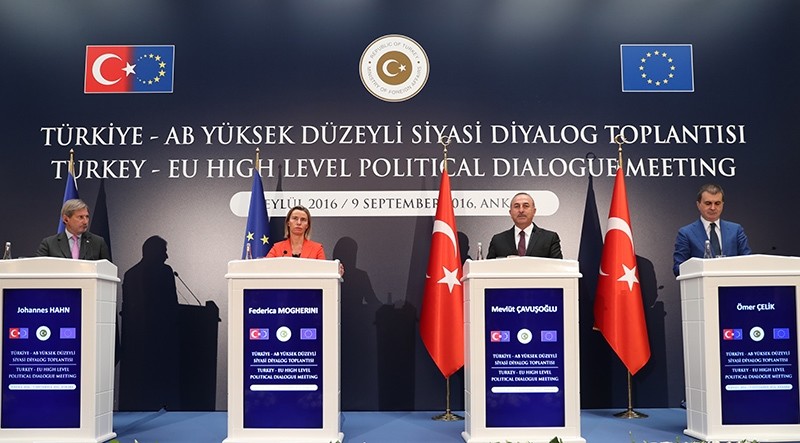 Turkey and the European Union on September 9, 2016 agreed to douse tensions that had darkened Ankara's prospects for joining the bloc in the wake of the failed July 15 coup. (AA Photo)
by Daily Sabah Sep 09, 2016 12:00 am

Minister for EU Affairs and Chief Negotiator Ömer Çelik told European officials that chapters 23 and 24 relating to fundamental rights and the rule of law must be opened as part of Turkey's EU accession process. Speaking at a press conference following the Turkey-EU High Level Political Dialogue Meeting in Ankara on Friday, Minister Çelik said, "If the criticisms are really aimed at the promotion of human rights and democracy, then those chapters should be opened, we should come up with an official platform and talk about all these things."

At the meeting, Foreign Minister Mevlüt Çavuşoğlu indicated that a solid road map to visa-free travel for Turkish citizens to the EU and a readmission agreement is necessary. Commenting on the EU's demand from Turkey to change the country's counterterrorism laws, Çelik said the EU's request is an irrational demand. "At a time when Turkey is still reeling after recovering from a military coup attempt and actively fighting the threat of several terrorist groups along with the cross-border operation [Operation Euphrates Shield] in Syria, the [EU's] demand that [we] 'change [our] counterterrorism laws,' is irrational. Such an approach would also put Europe in danger," he said.

Addressing remarks made by some EU politicians on freedom-related issues in Turkey, the EU minister said that these were reflections of insincerity on part of EU leaders and that Turkey is confident on chapters related to concepts of freedom and rule of law.

"A single country's [Greek Cypriot administration] block to Turkey's EU-accession relations also affects the EU's spirit of acting in unity. This is not the right approach and how this should be solved is the EU's personal issue. We should not forget that while Turkey has implemented so many reforms this month, EU countries have said that we should block accession talks. These are extremely racist and Islamophobic approaches. We believe in ourselves on every issue regarding the criteria," he added. Minister Çelik stressed that opening chapters 23 and 24 "would be a sign of sincerity," as he reiterated once more that Turkey is ready to open those and other remaining chapters.

The Turkey-EU High Level Political Dialogue, the first Political Dialogue Meeting at the ministerial level since the failed coup attempt, was held jointly with Foreign Minister Çavuşoğlu, Minister for EU Affairs and Chief Negotiator Çelik, Federica Mogherini, High Representative of the European Union for Foreign Affairs and Security Policy/Vice-President of the European Commission, and Johannes Hahn, EU Commissioner for Neighborhood Policy and Enlargement Negotiations. These officials discussed Turkey's EU accession negotiations, the latest developments concerning migration and the visa liberalization process and Turkey-EU cooperation in the fields of energy, economy and trade. Officials noted that recent developments regarding regional issues and cooperation on the fight against terrorism were addressed in the meeting.

At the meeting, Foreign Minister Mevlüt Çavuşoğlu indicated that a solid road map to visa free travel for Turkish citizens to the EU and a readmission agreement is necessary.

Minister Çavuşoğlu in his remarks stressed that the visa liberalization, readmission agreement and refugee agreements are all inter-connected and addressed the promised funding for Syrian refugees. He added, "The transfer of the promised 3+3 billion Euros must be accelerated and should not be stuck in bureaucracy."

Meanwhile, EU Foreign Policy chief Mogherini said, "The key element that we agreed was to talk more to each other and a little bit less about each other, showing full respect." She added that the main outcome of the meeting was "a strong recommitment to dialogue and common work on all strands of our cooperation." In regards to Turkey's EU accession negotiations, Enlargement Commissioner Hahn said: "Turkey was, is and will be a candidate country. And as a candidate country, we have to apply higher standards." Hahn emphasized that visa liberalization for Turks travelling to the EU is still on the agenda and said, "The timing is up to our Turkish colleagues, but it should be possible to find a solution."