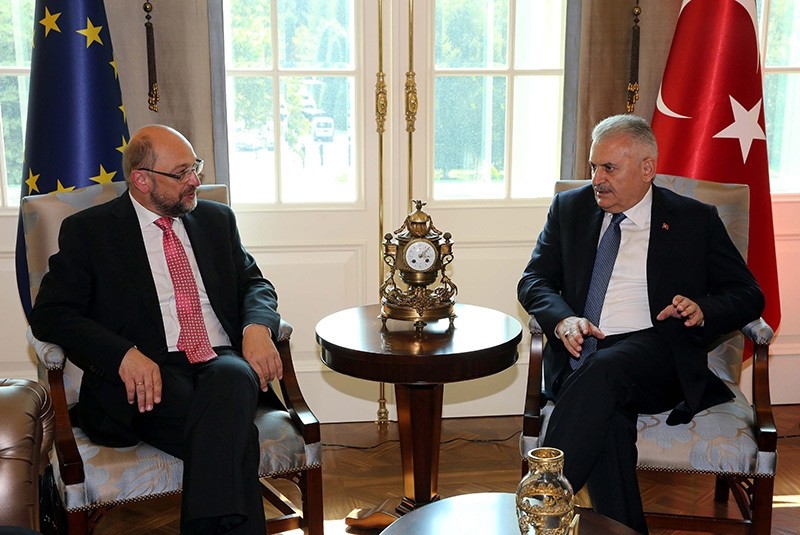 Prime Minister Binali Yıldırım told President of the European Parliament, Martin Schulz on Saturday that comments from some European officials, regarding the detention of pro-PKK Peoples' Democratic Party (HDP) deputies are based on distorted and missing information, as well as baseless prejudice, as he informed him about the details of the current situation in Turkey, saying that the procedures are carried out by independently by the judiciary and are based on the rule of law.

Yıldırım spoke to Schulz in a phone conversation and highlighted that Turkey is fighting a number of terrorist groups including the PKK and Gülenist terror cult (FETÖ), prime ministry sources said.

According to the sources, Yıldırım expressed that Turkey is disturbed by the support of some European political circles to terrorist organizations and distortion of facts about what is going on in Turkey.

He noted that the recent PKK attack in Diyarbakır, which took place shortly after the detention of pro-PKK HDP deputies for failing to testify in a terror probe, demonstrates this example and highlighted that politicians cannot be exempt from the law if they openly support terrorism.

In this regard, he noted that everybody should respect the decisions taken by independent courts in Turkey.

Meanwhile, Schulz and Yıldırım agreed on strengthening the dialogue and cooperation between Turkey and Europe.