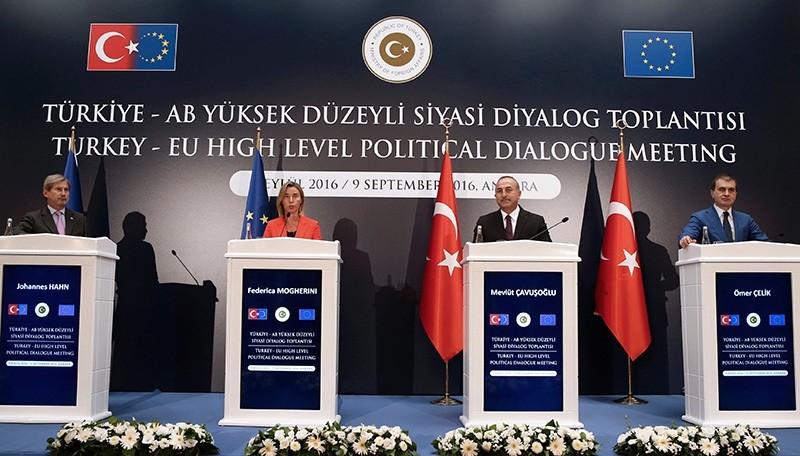 European Union Minister and Chief Negotiator Ömer Çelik told European Commissioner for European Neighborhood Policy Enlargement Negotiations Johannes Hahn on Tuesday that Turkey expects solid cooperation in anti-terror fight and that it is not possible for Turkey to tolerate activities of terrorist organizations in political, civilian and judicial fields. Çelik's comments follow a series of criticism from Turkey for Europe's failure to take solid action against terrorist groups including the PKK, Gülenist terror cult (FETÖ), DHKP-C and others.

According to ministry sources, Çelik spoke with Hahn on the phone and conveyed Turkey's sensitivities regarding the matter and told him that Turkey expects solid action from Europe, rather than just statements.

He highlighted that Turkey will continue to fight all terrorist groups with determination and noted that it is necessary for Turkey and EU to strengthen relations through cooperation opportunities, rather than making critical statements.

Çelik also added that under the scope of shared values such as the rule of law, democracy and human rights, Turkey and EU should show more solidarity cooperate with each other.

The Foreign Ministry criticized European Union on Tuesday for failing to comprehend Turkey's efforts in anti-terror fight and said recent statements made by High Representative of the European Union for Foreign Affairs and Security Policy are unacceptable.

Turkey says Europe should do more to help its anti-terror fight against groups like the PKK, which is recognized as a terrorist organization by Turkey, EU and the U.S., and FETÖ, which carried out a bloody coup attempt on July 15, killing 246 civilians and injuring over 2,000 others.