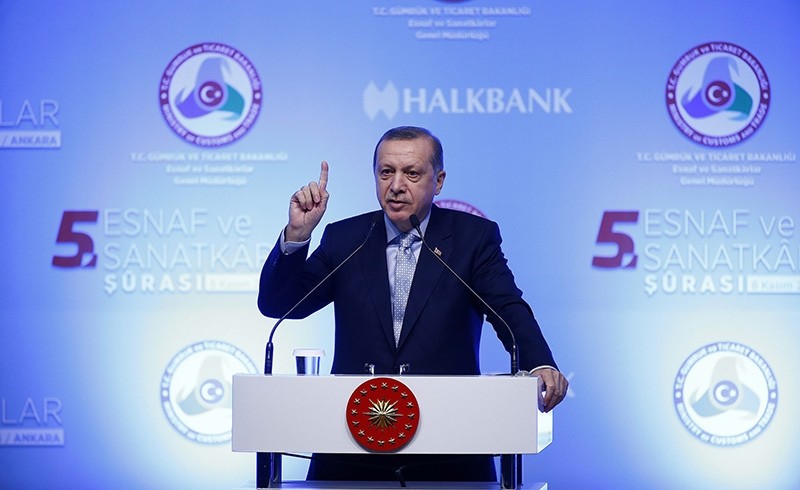 President Recep Tayyip Erdoğan issued a stern ultimatum to the European Union (EU) on Wednesday, saying that the 27-nation bloc should be ready for a new wave of refugees if it continues to offer safe haven to terrorists escaping from Turkey.

Tensions are running high between Turkey and the EU after some of the member states prepared to offer asylum to members of the Gülenist Terror Group (FETÖ) and PKK terrorists fleeing Turkey.

President Erdoğan said, "I guess those who offer a place for terrorists fleeing Turkey are also prepared for a couple of million refugees."

Commenting on recent debates in Brussels about whether the union should review Turkey's membership bid, Erdoğan called on the EU to make a final decision on Turkey's accession to the union.

Speaking ahead of an annual EU report assessing Turkey's progress on EU membership and visa-free travel, Erdoğan said: "They shamelessly say that Turkey's EU negotiations should be reviewed. You are late. Review it as soon as possible. But do not just review, make your final decision," he said.

Turkey applied to join the union in 1987 and negotiations began in 2005. As part of a deal agreed to last year to stem the tide of refugees to Europe, Turkey was promised relaxation of travel restrictions for its nationals and an acceleration of its membership application.

However, since the July 15 coup attempt, relations between Ankara and Brussels took a nosedive as Turkish politicians criticized the EU's muted response to the attempted takeover, while EU leaders condemned Turkey over widespread arrests and job suspensions that followed.

Erdoğan responded to some recent statements coming from some European politicians, comparing Turkey to Nazi Germany. The president labeled these as delusions saying Nazi ideology was based in Europe, and is again on the rise in Europe.

"Our ancestors saved the lives of those who were persecuted by Nazis," Erdoğan said.

The president noted that Europe does not care about the pain suffered by the victims of conflicts in the Middle East, but welcomes terrorists.

"Those who criticize us never see the fact that around 800 security officials and 300 civilians have been killed by PKK terrorists in Turkey," Erdoğan said and added that Europe never seems to mention politicians and civilians killed by the PKK.

Ankara has been railing the EU for remaining indifferent to the PKK and its supporters across the continent. The PKK erected a tent in front of the European Council building in Brussels after PKK supporters received permission from the Belgian government to keep the tent up until the end of March. Despite pledges to cooperate in the fight against terrorism, this move by the Belgian government raised eyebrows in Turkey.

Such a tent was set up in the Austrian capital in June as well. The PKK supporters received permission from the Austrian government to set up the tent for 10 days in Stefanplatz Square, adorned with posters of jailed PKK leader Abdullah Öcalan and a flag of the terrorist organization.

A photo exhibition was also held at the European Parliament featuring leaders and members of the PKK terrorist organization and its Syrian offshoot, the Democratic Union Party (PYD).