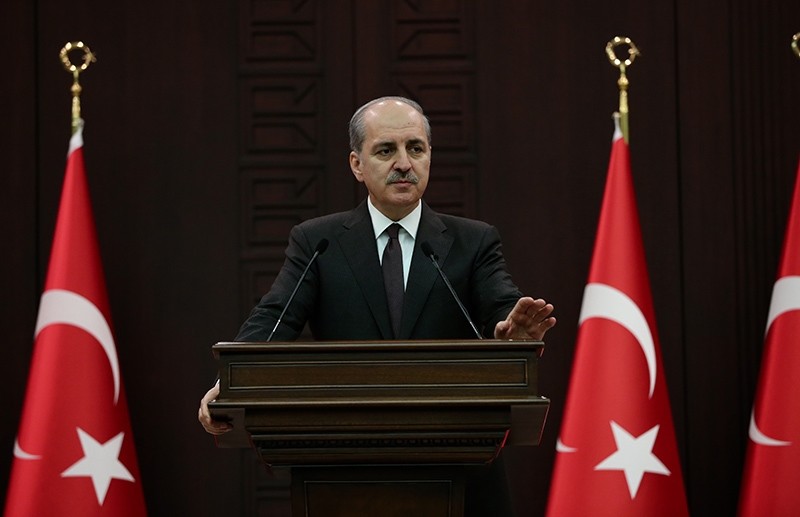 Deputy prime minister blasted the recent EU Progress Report on Turkey for being "biased" and "not friendly."

Numan Kurtulmuş, speaking to journalists in the capital Ankara on Monday, said that Turkey rejects the report, which was released last week, and includes the July 15 failed coup attempt and the follow-up arrests.

"I would like to point out that the idea behind this report is not really friendly," Kurtulmuş said.

"It is a biased report, which could affect [negatively] Turkey's uphill fight against terrorism in diplomatic terms."

The EU's annual Progress Report has gotten much criticism from Turkish authorities, who say it is not objective.

"It is impossible to understand Mr. Schulz's threatening remarks," he said.

Kurtulmuş also said his Justice and Development (AK Party) Party has been negotiating with the opposition Nationalist Movement Party (MHP) over a new constitution to shift Turkey from a parliamentary system to a presidential one.

Senior AK Party officials recently announced they would change the constitution with MHP support, while the main opposition Republican People's Party (CHP) has repeatedly stated its opposition to changing the system.

Kurtulmuş said they also want the CHP to be part of those negotiations.

His call came after CHP leader Kemal Kılıçdaroğlu said Saturday that their "door is always open to exchange views" on the issue-reiterating, however, that his party will not support a presidential system.

Kurtulmuş said a total of 62 suspects have been arrested so far over the death of a district governor in a terrorist attack last week.

Muhammet Fatih Safitürk, the governor of Mardin's Derik district, was killed by a PKK terrorist attack on his office in the southeastern Mardin province on Friday.

Kurtulmuş said 10 suspects were released while the rest were still going through an interrogation.

He ensured that the perpetrators of the attack and whoever included will "get the most severe penalty."