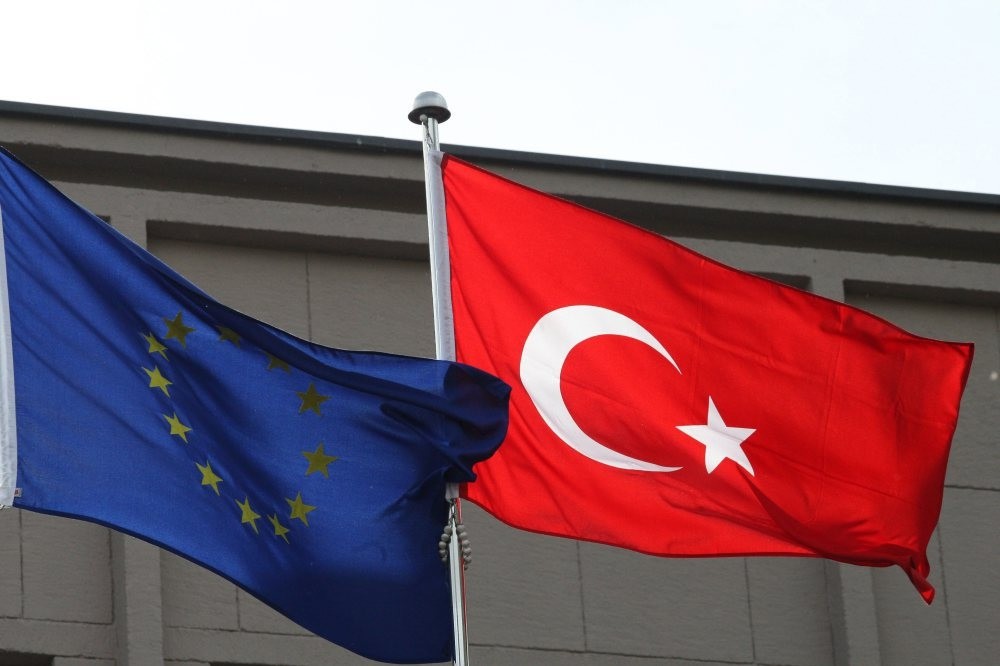 The rise of anti-Turkey rhetoric from European politicians, coupled with the indifference toward the PKK, FETÖ activities across EU cities, has made people in Turkey furious with the EU, significantly decreasing the desire to join the union

Amid a rise of anti-Turkey rhetoric from European politicians and the European Union's indifference toward the PKK and Gülenist Terror Group (FETÖ), an increase in public opinion against the EU has been observed by analysts. While the EU has been a strong ally of Turkey in terms of political and economic relations, and vise-versa, the discord between the political rhetoric in supporting Ankara against terrorist groups and the EU's measures against them, both within EU borders as well as in conflict zones, has angered both Turkish politicians and civilians alike.

The PKK terrorist group's ability to hold rallies across European cities authorized by EU officials, despite the PKK being listed as a terror organization by the EU, shows the union is turning a blind eye to the July 15 coup attempt by FETÖ in Turkey and the lack of measures taken against the network's members in EU cities. This has heightened the tensions in the already strained diplomatic relations between Turkey and the EU. On Tuesday, the European Parliament's (EP) main groups said they will vote this week on a proposal to suspend membership talks with Turkey, that began with the Ankara Agreement which was signed with the then European Economic Community in 1963. Speaking at the meeting of the Standing Committee for Economic and Commercial Cooperation of the Organization of Islamic Cooperation in Istanbul, President Recep Tayyip Erdoğan criticized the bloc for failing to take concrete action against terrorists.

"Whatever the result, this vote has no value for us," the president said, adding that EU is taking sides with terrorist organizations by criticizing Turkey's fight against the groups, especially FETÖ, following the July 15 failed coup attempt, which killed 248 of its citizens and injured over 2,200 others.

"We have made it clear time and time again that we take care of European values more than many EU countries, but we could not see concrete support from our Western friends. ... None of their promises were kept," Erdoğan said.

Talking to Daily Sabah, Deputy Minister for EU Affairs Ali Şahin said, the EP's decision to vote against Turkey's EU membership reflects the bloc's anti-Turkey stance. "Although the decision is not legally binding on the membership talks, it will be politically influential in the EU's future decision on Turkey's accession talks," he said.

Şahin said the EP's attitude toward Turkey's fight against terrorism is contradictory to the EP's values. "While the EU hails its pro-democracy stance, it is unexpected of them to criticize Turkey for defending its democracy, particularly after the July 15 coup attempt. The EU politicians must understand that the stability and security of the EU starts with the stability and security of Turkey. The EU cities will not be safe and secure unless Turkey's cities are," the deputy minister said. Criticizing the EU's lack of measures against PKK and FETÖ members, Şahin added that the EP's vote will have strategic impacts, affecting the EU deeply, as Turkey has been a strong partner in its fight against terror and dealing with the migrant issues.

Also on Tuesday, Turkey's EU Ministry released a statement saying that a decision regarding the acceptance of Turkey as a member state into the European Union is a decision that would be made by the European Council.

Ankara has recently warned that if the EU does not make a decision by the end of the year on Turkey's membership, the issue will be taken to the people and a referendum would be held on the matter.

Meanwhile, the failure of the EU to grant visa liberalization for Turkish citizens as part of the migrant settlement program has been another issue between Brussels and Ankara. The EU and Turkey signed a refugee deal on March 18, which aimed to discourage irregular migration through the Aegean Sea by taking stricter measures against human traffickers and improving conditions for nearly 3 million Syrian refugees in Turkey. Although Turkey fulfilled most of the criteria, differences between Brussels and Ankara on anti-terror legislation has forestalled the visa-liberalization deal.

Commenting on Thursday's EP vote, German Chancellor Angela Merkel said on Tuesday that she is in favor of maintaining dialogue with Turkey, ahead of the European Parliament's announcement that it will put Turkey's membership negotiations on hold.

On Tuesday, EU Foreign Policy Chief Federica Mogherini said that Turkish authorities were right in bringing those behind July 15 to account. "Turkish authorities have a legitimate right to bring those behind the terror attacks and the coup attempt to account," Mogherini said. Warning that halting Turkey's accession process would be a "lose-lose" move, Mogherini added that strong cooperation could be established with Turkey in tackling the Syria and Cyprus issues, as well as energy related matters.

Meanwhile, in favor of the vote against Turkey, "No business as usual with Turkey, we support a freeze of EU accession negotiations," said Manfred Weber, head of the center-right European People's Party, the largest group in the parliament. Weber also added that Turkey's turning to the Shanghai Cooperation Organization, as a possible alternative to the EU, was surprising. Gianni Pittella, leader of the Socialist group, the second biggest in the assembly, added: "Turkey's EU accession talks must be temporarily frozen. There are no conditions to proceed now."

On the other hand, Geoffrey Van Orden, from the European Conservatives and Reformists Group, said that the EP's stance was not being received well by the Turkish public.

"The Turkish nation is not happy with our attitude. Turkey is a country that has been dealing with terror and refugee issues for many years. Closing the EU's doors on Turkey would be a strategic mistake," Van Orden stated.

Survey show decline in Turkish public support to joining EUIn a survey conducted by MAK Consultancy between Nov. 8 and Nov. 12 in 50 Turkish provinces with 5,400 people, 64 percent of people said they were against Turkey continuing accession talks with the EU, while 22 percent said the negotiation talks should continue. Meanwhile, 78 percent of the same sample said they did not find the U.S. and NATO to be sincere strategic allies of Turkey, while 12 percent said they believed them to be Turkey's partners.

Also speaking to Daily Sabah, the chairman of the polling company GENAR, İhsan Aktaş, who is also a columnist for Daily Sabah, said the recent attitude has lowered the urge among people significantly, particularly the youth, to join the EU. "While the ratio of those against joining the EU has increased to about 65 percent in recent surveys, the youth saying they would move to EU if visas were liberated has decreased to about 25 percent." Aktaş added that the EU has also lost its economic advantage against Turkey, as the demand to join the EU was high due to a lack of economic developments in the country during Turkey's previous years.