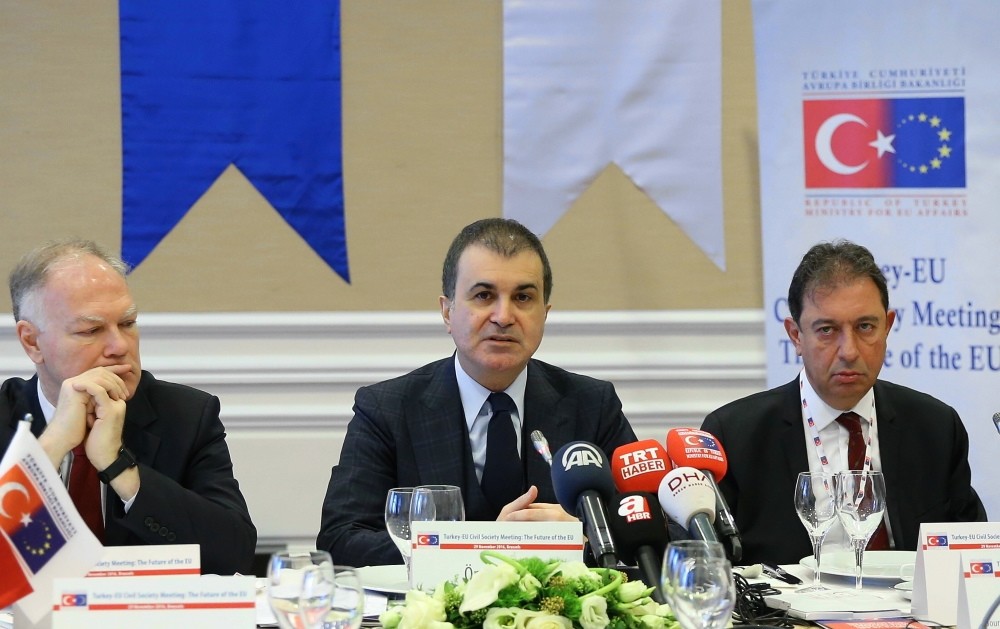 A week after the European Parliament (EP) voted in favor of freezing Turkey's accession talks, EU Minister and Chief Negotiator Ömer Çelik held talks with EU officials in Brussels on Wednesday morning, discussing ways to overcome the crisis between Turkey and Europe. The refugee deal between Turkey and the EU entails Turkey to readmit refugees who cross into EU territory, while the EU contributes to their upkeep by providing 3 billion euros, with another 3 billion euros to be added, lift visa restrictions to Turkish citizens and accelerate Turkey's EU membership negotiations.

Ankara has criticized Europeans for not satisfying the conditions of the deal, especially concerning the lifting of the visas and contributing to the refugees' upkeep. The talks over the visa restrictions have been hampered by Turkey's definition of terrorism, which Europe sees as too broad while Ankara argues that its definition is necessary at a time it is battling terrorist groups like Daesh, the Gülenist Terror Group (FETÖ) and the PKK. Turkey has repeatedly extended the deadline it has given to the EU for lifting of the visas, finally declaring recently that the deal will be forfeited if the EU fails to satisfy this clause of the deal by the end of the year. It is believed that if Brussels does not lift the visas by then, Turkey will set its own course concerning the refugee crisis.

President Recep Tayyip Erdoğan has repeatedly stressed that Turkey, which has been sheltering around 3 million refugees for years, will stop preventing Syrians living in Turkey from crossing over to Europe if European leaders fail to pick up some of the burden.

Minister Çelik stated that Turkey expects the EU to sincerely start doing its part as agreed in the March 18 deal. Çelik continued to say that it was wrong of EU officials to concentrate only on the security and migration dimensions of the deal.

"We will shortly draw our own road map," he stated.

Speaking to journalists before his departure to Turkey, Çelik said he had "productive" meetings with European Commission (EC) First Vice President Frans Timmermans, EU Commissioner for Migration, Home Affairs and Citizenship Dimitris Avramopoulos and the Commissioner for the Security Union, Julian King.

When asked about whether the European Council's EU Leaders Meeting on Dec. 15 will take any measures or steps against Turkey, such as freezing the accession talks, Çelik said his EU counterparts told him that individual voices against Turkey did not reflect the thoughts of the EU leaders.

Prior to the voting at the EP, foreign ministers of the bloc convened in Brussels and decided to keep the communication channels open at all levels "to make sure we listen to each other."

Çelik stated that in the coming days he will be meeting with Prime Minister Binali Yıldırım to draw a road map on relations with the EU.

"The draft roadmap will then be presented to President [Recep Tayyip] Erdoğan," Çelik said.

The fight against Daesh in Mosul and the Syrian crisis, especially the worsening humanitarian aspect of it, were among the topics discussed between Çelik and EU officials.

After giving the examples of Daesh fighters being released following their deportation from Turkey to European countries, Çelik said that EU countries need to be more meticulous and collaborative.

"We have imprisoned [arrested] around 1,000 Daesh members and on the other hand we see sympathy towards the PKK in some parts of the Europe. These terrorists can cover themselves as members of another terror group. One may actually be a PKK terrorist but show himself as Daesh or the other way round," he said.

When asked about the EP's Turkey rapporteur Kati Piri refuting Timmermans words for a Belgian magazine that [Fetullah] Gülen was "certainly" behind the failed coup attempt, Çelik said no one should expect Piri to understand such matters.

"It would otherwise be disrespect to Piri," he said, adding that Ankara's expectations on a common understanding of the Gülenist Terror Group (FETÖ) were also spoken with EU officials during his visit.

Drawing attention to the increasing xenophobia and Islamophobia in Europe, Çelik said that a few mainstream political parties think they could increase their influence by adopting the racist agendas of the far-right groups.

"No one will go for the copy when there are original ones," he said as he called for major mainstream politicians to not fall into xenophobic traps. "It will not help them get more support and it is obvious that those who fiddle with Turkey do not end up with good fate."
RELATED TOPICS