European Parliament member criticizes its support for PKK in parliament 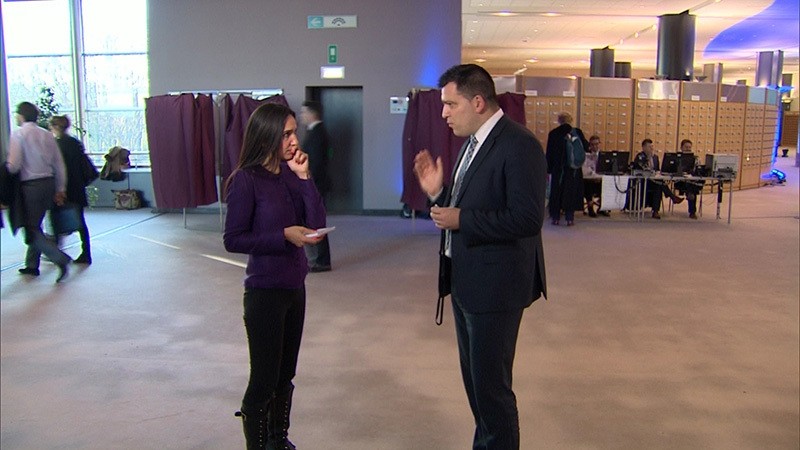 Duygu Lelou011flu with Member of the European Parliament (EP) Tomas Zdechovsky in Brussels
by Duygu Leloğlu Dec 15, 2016 12:00 am
Tomas Zdechovsky, a member of the European Parliament (EP), has criticized the EP's tolerance of PKK terror activities across Europe, saying it should be banned in the parliament if it is accepted as a terror organization by the European Union.Criticizing the group within the EP which supports and tolerates PKK activities in Parliament, as well as across the EU, Zdechovsky, a Czech member of the EP, told Turkey's private broadcaster a Haber news correspondent Duygu Leloğlu that all ties to terror groups should be cut if they are listed as terror organizations.

"This is a really strange situation. The PKK must be banned from the EP immediately. If the PKK is listed as a terror organization, then we should not have close relations with them. We should only have a dialogue with democratic Kurdish forces. However, we should never come together with groups involved in an armed attack against Turkey or be in such power trips," Zdechovsky said.

Underlining the importance of stability and cooperation between the EU and Turkey, Zdechovsky also said any attempts which try to overthrow a democratically elected government are not acceptable.

"It is not possible to accept a group within the military attempting to overthrow Erdoğan. You can only win over those elected by elections in elections," Zdechovsky said, adding that there was also an intentional rise in anti-Turkey rhetoric in Europe. Responding to Leloğlu's question on the PKK tents erected earlier in this year in Brussels, EP's Turkey Rapporteur Kati Piri said she is a Dutch politician, and that the question should be directed to the Belgians.

Meanwhile, answering a question related to a recent photo exhibition that displayed photos of the PKK terrorists at the EP, Piri said the decision on this is in the hands of the EP president.

Meanwhile, a Slovenian member of the EP, Franc Bogovic, said the EP is an open area for everyone and it is Turkey's right to question the sincerity of the body when there is an attempt to legitimize the PKK.
Last Update: Dec 15, 2016 1:37 pm
RELATED TOPICS