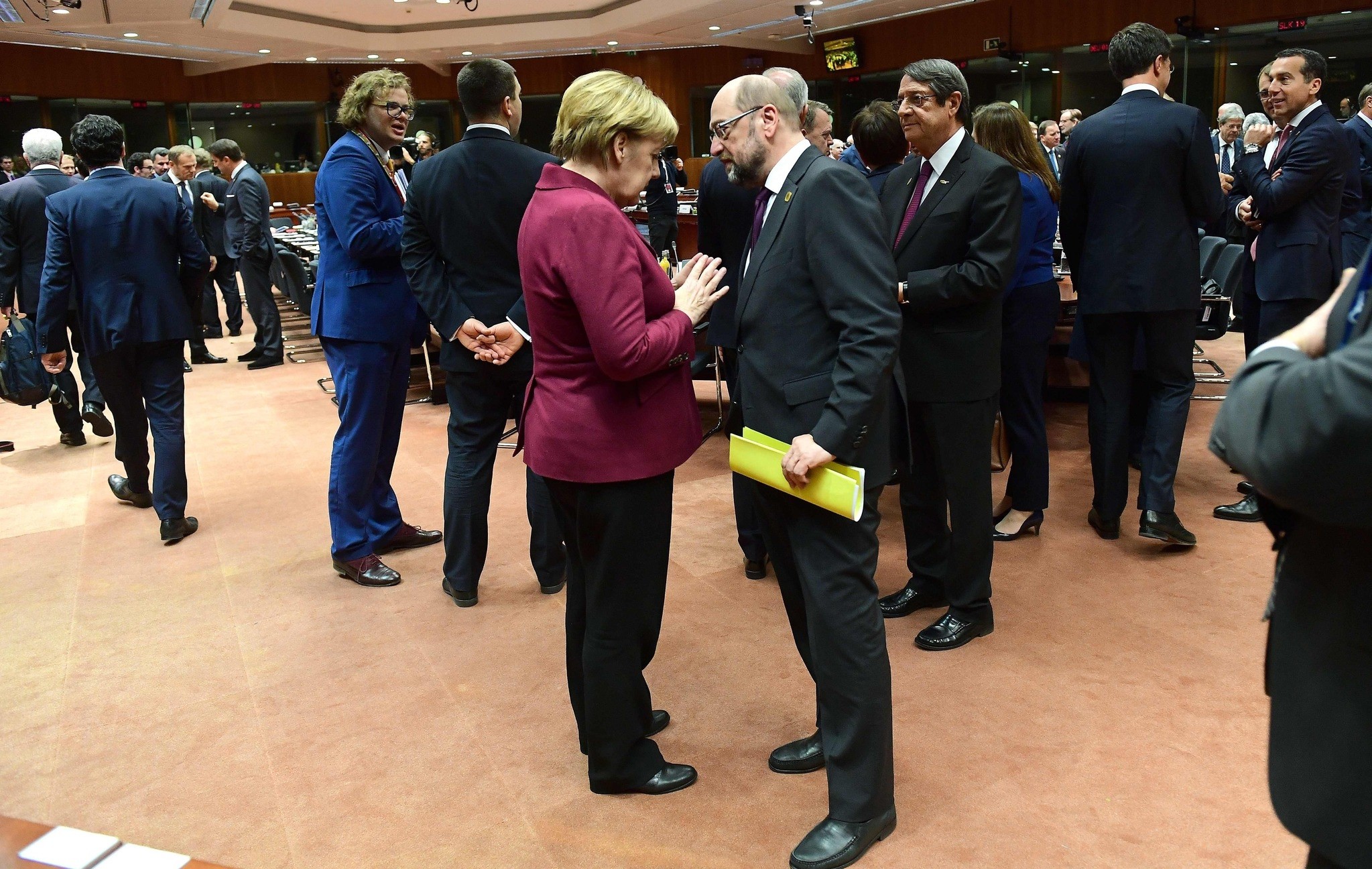 German Chancellor Angela Merkel (C-L) and European Parliament President Martin Schulz (C-R) speak in European Union leaders summit in Brussels on December 15, 2016. (AFP PHOTO)
by Mehmet Solmaz Dec 15, 2016 12:00 am
Despite the EU's heavy anti-Turkey stance and Austria's calls to freeze accession talks with Ankara, leaders in the European Union have expressed their commitment to the migration deal with Turkey while the European Parliament's calls to halt Turkey's negotiations did not find support among the leaders.

Speaking at her arrival to the EU Leaders Summit in Brussels on Thursday, German Chancellor Angela Merkel stated that her country stands by the EU-Turkey Agreement that was signed in March and that Germany intends to continue to support Greece with repatriation efforts.

While Europe had been experiencing its biggest migration crisis since World War II, the deal with Turkey almost brought the migration flow to an end. The agreement was signed after European Council President Donald Tusk warned member states that Europe's Schengen passport-free travel zone is on the edge of collapsing. A study by Germany's Bertelsmann Foundation showed that a collapse of the Schengen zone could cost the EU up to 1.4 trillion euros over the next decade. The study estimated that under a worst case scenario, in which the reintroduction of controls at EU borders pushed import prices up 3 percent, the costs to the bloc's largest economy Germany could be as much as 235 billion euros between 2016 and 2025, and those to France up to 244 billion.

Prior to the meeting, Austrian Chancellor Christian Kern said that while his country had suggested blocking negotiations with Turkey, they had failed to secure a majority in the European Council. He acknowledged some member countries have "good reasons" to keep the negotiations going.

Greek Prime Minister Alexis Tsipras said he would press fellow EU leaders at a summit on Thursday to end the deadlock over plans to distribute some of the more than 60,000 asylum-seekers now in Greece. "We have to keep solidarity and make decisions for sharing the burden and the responsibilities," he told reporters on his arrival, saying the EU should maintain the deal with Turkey that has largely halted the flow of migrants to Greece.

EU Migration Commissioner Dimitris Avramopoulos recently presented the latest figures for the EU's refugee and migration policy. The intra-EU agreement to relocate refugees has faltered since a large majority agreed to it at the height of the refugee crisis in Sept. 2015. Of the 160,000 refugees intended to have been relocated around the EU by Oct. 2016, about 5 percent, or 8,000 people, have been.

On the other hand, EU officials acknowledged that Turkey has been fulfilling its obligations in the refugee deal struck with the EU in March. Refugee flows from Turkey have been reduced to about 80 per day.

Following the EP's vote to end Turkey's accession talks, President Recep Tayyip Erdoğan said the EU had not kept its promises to Turkey and warned that Ankara would open the country's borders and allow refugees into the EU.
Last Update: Dec 15, 2016 6:39 pm
RELATED TOPICS