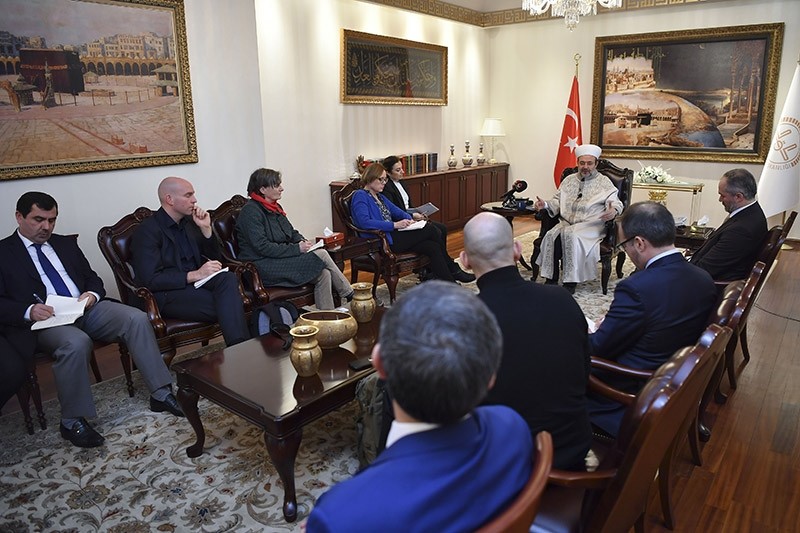 The Presidency of Religious Affairs (DİB, better known as Diyanet) head Mehmet Görmez rejects accusations that the institution's affiliated imams in Germany and in Europe were involved in spying activities for Turkey.

In a meeting with German journalists at the DİB office in Ankara, Görmez said "The portrayal of the efforts we have carried out with the Germany branch of the Turkish-Islamic Union for Religious Affairs (DITIB) to protect the people from the dangers of the organization called FETÖ [Gülenist Terror Group] as spying activities by Diyanet's officials is deeply upsetting."

Touching on the close and important relations between Turkey and Germany, Görmez explained that DITIB was established to promote peace and harmony among the society while curbing extremism, thus setting an example for all Muslim communities in Europe.

Görmez explained that DITIB – which recognizes Turkey's Diyanet as a higher spiritual authority – has carried out its activities through abiding by the legal systems of both countries since its foundation. DITIB has informed German authorities at each step, Görmez said, noting that this relationship had been beneficial for all parties.

Görmez underlined that Diyanet plays merely a guiding role for DITIB in education and principles of worship in their facilities, whereas all mosques, associations and community centers were established by the efforts and support of German nationals with Turkish background or Turks living in Germany.

"I want our German friends to know our intense efforts with DITIB to prevent the spread of ideologies of Daesh and similar organizations among our children in Europe," Görmez said, adding that FETÖ has used and exploited religion in a similar way with these groups to cover its illegal activities, which culminated in the violent July 15 coup attempt.

Görmez stated that describing the reflexes of religious officials to protect Turkish nationals, Muslims and Turks in Germany and dual citizens of Turkey and Germany as spying sounds illogical. He said that Diyanet did not instruct DITIB and its imams to carry out monitoring activities on Gülenists, but it warned them on false religious teachings. Görmez added Diyanet and its affiliated personnel respect the privacy of individuals, but added that Diyanet will still carefully investigate the charges through its inspection mechanisms.

DITIB's activities increasingly came under media spotlight in Germany as the two countries were involved in a diplomatic spat on various issues since mid-2015.

After the collapse of the reconciliation period in July 2015 and the PKK resumed its 40-year-long armed insurgency against the Turkish state, Ankara has accused Berlin of harboring militants and sympathizers from the PKK and far-left Revolutionary People's Liberation Party-Front (DHKP-C) terrorist groups carrying out armed attacks and suicide bombings in Turkey. Turkish officials also state that the PKK's fundraising, recruitment and propaganda activities have largely been ignored by German authorities, which reject these claims.

German parliament voted in June 2016 to declare the 1915 massacre of Armenians by Ottoman forces a genocide, prompting another area of crisis among the two countries.

Following the July 15 coup attempt, which killed 246 people and injured 2,200 others, Turkey has accused Germany of harboring high-rank FETÖ members who were involved in the coup attempt or other illegal activities of the group. FETÖ has a significant follower base and commercial presence in Germany, which has criticized a security clampdown by Turkish authorities since the coup attempt.

Germany will not tolerate Turkish intelligence operations within its borders, the head of the agency, Hans-Georg Maassen said in a press conference in Berlin, in addition to citing concerns about recent developments in Turkey, as well as "influence operations" directed against the Turkish minority in Germany or Germans with a Turkish migration background.

"We cannot accept that intelligence agencies are operating in Germany against German interests, and that is why we protest," Maassen said.

The investigation, that launched this week, followed a criminal complaint filed in early December by Volker Beck, a German lawmaker and religious spokesman for the Green party.

Beck said he filed his complaint after reports that Ankara had asked Muslim imams sent from Turkey to work for DITIB, Germany's largest association of mosques, to provide information about followers of U.S.-based Fetullah Gülen.

The Green lawmaker criticized the prosecutor's office for waiting so long to launch an investigation, and said it was unclear if possible suspects had left the country.

A spokesman for the prosecutor's office said the probe was directed against unknown perpetrators because there was not yet sufficient evidence to target specific individuals.

Bekir Alboğa, general secretary of DITIB, was quoted in the Rheinische Post newspaper last week as saying that some DITIB imams had mistakenly provided information about FETÖ leader Gülen's followers to Diyanet.

But in a statement on the DITIB website dated Jan. 12, Alboğa said he had not confirmed reports of spying. He said initial instructions to clerics from Diyanet were confusing, but the agency had clarified last month that imams were expected to carry out religious duties only.

"We are taking the charges seriously and investigating them ourselves," Alboğa said.