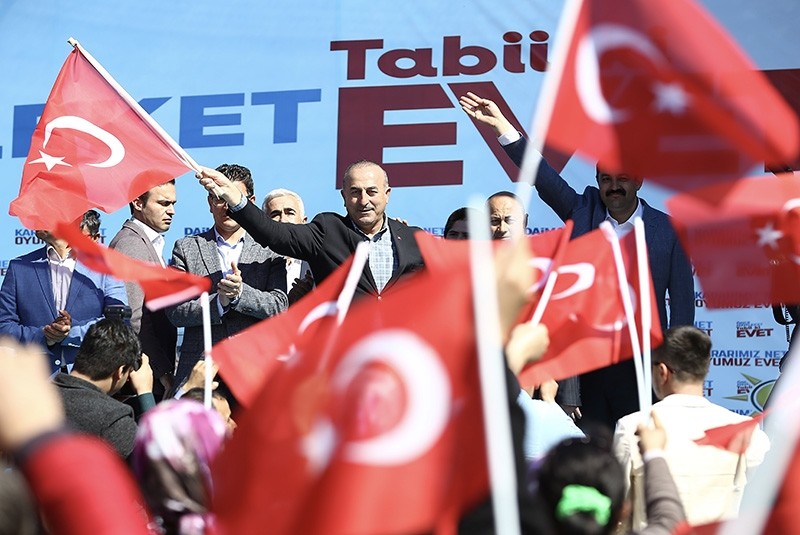 Turkish Foreign Minister Mevlüt Çavuşoğlu slammed the Dutch authorities on Saturday for banning his Rotterdam rally scheduled for next week.

The rally for Turkey's April 16 referendum on constitutional changes was banned Friday.

"They say 'You cannot hold a rally in a public space.' What do you mean we cannot? Where is the democracy or the freedom of speech you claim to have been giving us a lesson on? What about the freedom of assembly?" said Çavuşoğlu during a meeting in the southern province of Antalya.

"The Netherlands is not a place for other countries' election rallies," Dutch Prime Minister Mark Rutte said on Facebook on Friday. "We will not cooperate with this. We find this undesirable."

"We believe that the Dutch public space is not the place for political campaigns of other countries," he added.

Çavuşoğlu said the Netherlands could not hold back Turkish officials. "We go wherever we want, and meet with our citizens," he added.

In an inauguration ceremony in Antalya's Demre district, Çavuşoğlu slammed Germany and the Netherlands for doing the "No" campaign's bidding ahead of the constitutional referendum to be held on Apr. 16.

"I see it, live it as foreign minister. European countries, the enemies and opponents of Turkey agree on 'No'. Do you think that it was a coincidence? Why they say 'No'?.. Because they do not want Turkey to grow, develop and be independent."

Çavuşoğlu said that the European countries were treating Turkey as it was a second-class country.

"I hope they will come to their senses soon and remember the past tragedies caused by xenophobia and similar phobias," he said.

On Thursday, the municipality of Gaggenau in southwest Germany revoked its permission for Turkish Justice Minister Bekir Bozdağ's meeting, citing concerns about overcrowding.

This prompted Bozdağ to cancel his planned visit to Germany altogether.

Economy Minister Nihat Zeybekci's planned address on Sunday to a Turkish community in western city of Cologne was also cancelled by local authorities over security concerns.

The referendum will ask for an up or down vote on changes such as giving Turkey's president wide-ranging executive powers and abolishing the post of prime minister.