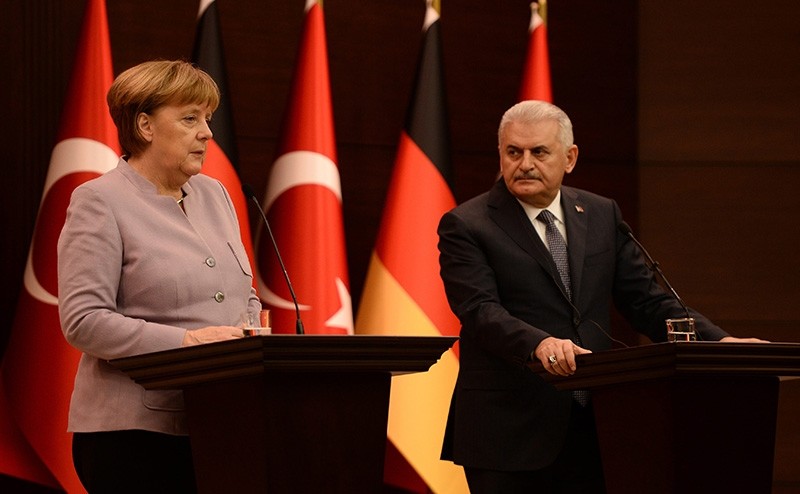 Prime Minister Binali Yıldırım and his German counterpart Angela Merkel held a phone call on Saturday amid a diplomatic spat between two after Thursday's controversial ban on meetings of two Turkish ministers with the Turkish community in Germany.

"I have a telephone call with the German chancellor at 3:00 pm (1200 GMT)," Yıldırım told a rally in the central Turkish province of Kırşehir where he was campaigning for a "Yes" vote in the April 16 referendum to switch to presidential system.

Following the phone call, Yıldırım told reporters that the phone call was well and productive. "It took a little longer than we had planned. Of course I had spoken to Ms. Merkel about the recent bans, restrictions on referendum meetings with citizens in Germany. We will try a different approach in the upcoming programs. Next week, the foreign ministers of the two countries will meet and clarify this issue," Yıldırım said.

Turkey and Germany have been locked in a war of words this week after German towns blocked events where Turkish ministers sought to address Turks living there about the vote.

Turkish Justice Minister Bekir Bozdağ was due to speak in Gaggenau in western Germany on Thursday but it was cancelled, while the town of Frechen on the outskirts of Cologne scrapped a rally that had been scheduled for Sunday.

Elsewhere, Cologne city authorities withdrew permission for a hall to be used for a speech by Turkish Economy Minister Nihat Zeybekci.

Yıldırım said the moves were "an unfortunate decision against democracy, freedoms".

"I invite the German authorities to look (again) at these attitudes which are incompatible with good relations between two countries," he said in the rally in Kırşehir.

The premier accused Germany of allowing "nay-sayers" against the vote and "terrorists" to rally while blocking the "Yes" vote campaigners, which he said was not acceptable.

In a defiant tone, he told the Kırşehir rally: "Our citizens in Germany will give them a lesson in democracy."

Earlier in the day, Bozdağ had accused Merkel of failing to criticize the municipalities' decision to block the events.