EU states align with 'no' voters for constitutional referendum in Turkey via bans, PM Yıldırım says 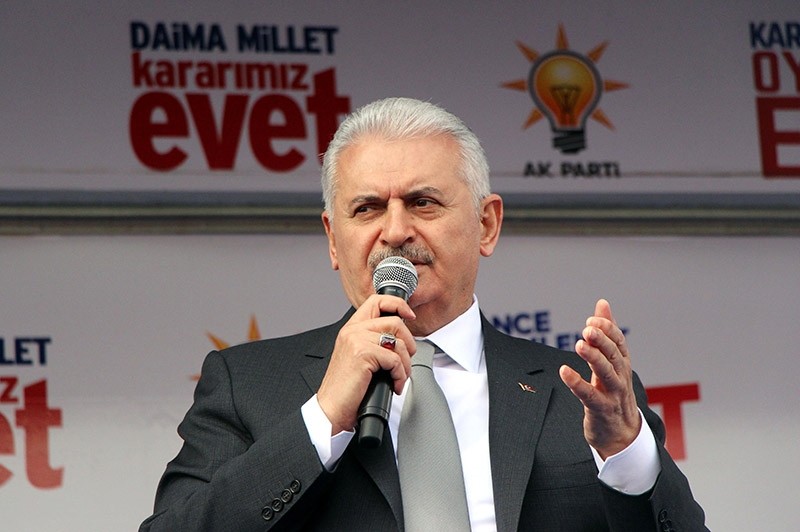 With 35 days left until the referendum on a constitutional amendment package designed to switch Turkey's current parliamentary system to a presidential one, Prime Minister Binali Yıldırım addressed a large crowd in Düzce on Friday where he strongly criticized the European states on their position against Turkey.

"The bans are a reflection of a political ideology leftover from World War II and shows that the countries that are imposing the bans are uneasy with democracy and freedom," the prime minister said.

Yıldırım again reiterated in his remarks that the new Constitution has been created to eliminate polarization and promote unity in Turkey.

Recently, Turkey's Family and Social Affairs Minister Fatma Betül Sayan Kaya's meetings in the Netherlands and Germany were canceled on Friday by authorities. Before the Netherlands, local German authorities had canceled the public appearances of Turkish ministers and government officials who were campaigning ahead of the April 16 referendum in several German towns and cities.

The cancellations were based on excuses, such as the inadequacy of parking and security concerns. On that note, Prime Minister Yıldırım strongly criticized the European states' position against Turkey, stating that those countries have lost their neutrality on Turkey's upcoming referendum on constitutional change and have taken the side of the "no" voters.

"Let those European countries impose bans against Turkey. It would be their disgrace not ours. However, such actions [such as the bans on Turkish ministers] are not an execution of a 'friendly state.' Such bans are a reflection of the political ideology remaining from World War II and shows the countries imposing the bans are uneasy with democracy and freedom," Yıldırım said, addressing citizens in Düzce province as part of his campaign tour.

He also told German authorities to not interfere with Turkey's domestic politics.

"We do not interfere with Germany's domestic politics," he said.

Continuing his remarks Yıldırım called the constitution of a country its "compass."

"Our country's [Turkey's] compass is broken," he said.

He also detailed the disparity in the power of authority between the president and the prime minister in the current parliamentary system.

"The people have paid the price in the past for those disputes in Turkish political history," he noted.

Prime Minister Yıldırım added to his remarks by calling on the main opposition Republican People's Party (CHP) Chairman Kemal Kılıçdaroğlu, to vote "yes" in the upcoming referendum, while describing the pro-PKK Peoples' Democratic Party (HDP) as the "subcontractor of Qandil [the headquarters of the PKK]."