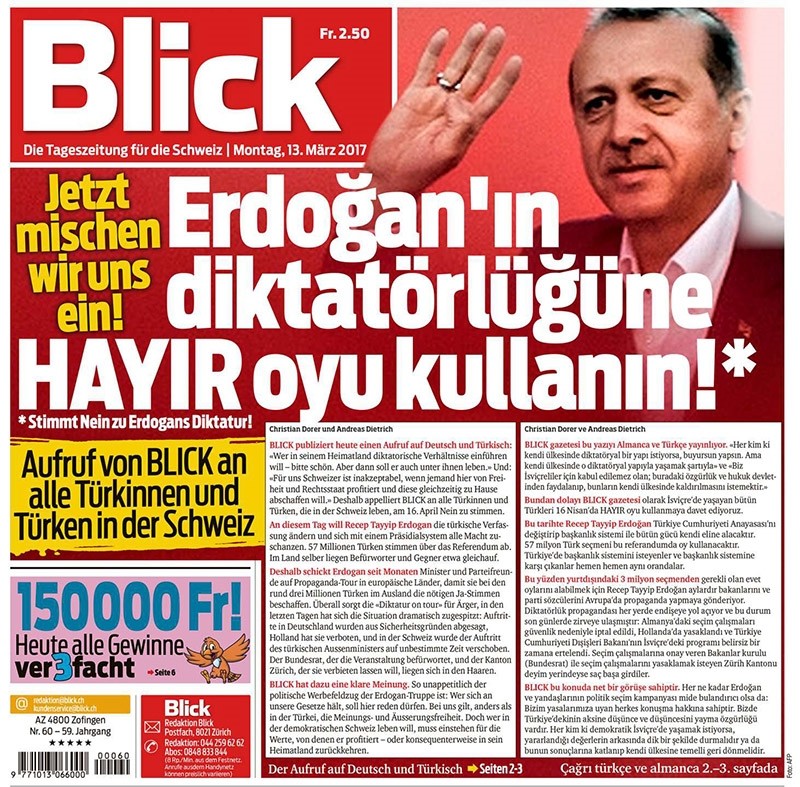 A Swiss newspaper set aside its entire first page to address the Turkish community in Switzerland, urging them to back the "No" campaign amid bans on Turkish government officials trying to meet with Turks to promote the "Yes" campaign.

The tabloid daily Blick's controversial headline was "Vote no against Erdoğan's dictatorship," along with the subtitle "Now we are meddling!" in reference to the view that claims Turkish officials are meddling in the internal affairs of European countries. The controversial front page drew harsh criticism from Turkish citizens.

In an editorial address published both in Turkish and German, the daily claimed that the proposed changes for the referendum could extend Erdoğan's powers to a dictatorial level.

Following recent bans on Turkish ministers in the Netherlands and in Germany, the Zurich city council demanded that the federal government cancel the meeting with Turkish Foreign Minister Mevlüt Çavuşoğlu scheduled for Sunday, March 12. Amid an escalating row with the Netherlands, Çavuşoğlu did not attend the meeting in Switzerland.

Although Turkish ministers are being banned from meeting with Turkish citizens and promoting the "Yes" campaign, Turkish politicians in the "No" campaign have not faced any obstacles for holding meetings in European countries.

Switzerland has been criticized for turning a blind eye to PKK terrorism. Hundreds of PKK supporters organized a rally in January in front of the Palace of Nations, the United Nations headquarters, in the Swiss city of Geneva.

A bomb attack was carried out against the Turkish Consulate in Zurich in January in the early hours of the morning. Fireworks and other explosives were used and damage was caused to the walls and windows of the building. While the suspects and motives remain unclear, the PKK terror group has recently increased their demonstrations in Switzerland.

In addition, PKK terrorists attacked the home of a Swiss-Turkish family in Zurich in December 2016, the victim of the attack told Anadolu Agency. Mehmet Cek said the culprits harassed his wife and two children for more than 20 minutes when he was not at home.

The PKK is officially listed as a terrorist organization by Turkey, the U.S., and the EU. The terrorist group resumed a 30-year armed campaign against the Turkish state in July 2015. Many supporters of the terrorist group who claim persecution in Turkey find asylum in European countries.

The PKK, exploiting several nongovernmental organization fronts, is active in many European countries including Germany, Austria, Denmark, France, the Netherlands, Switzerland and Greece.